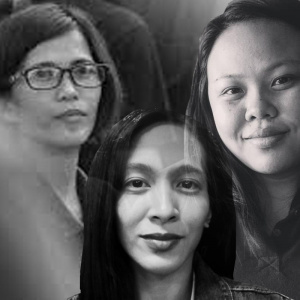 National Union of Journalists of the Philippines held hybrid online and offline congress.

IAWRT’s Communication Officer and Manila Today Editor Lady Ann Salem also known as Icy is one of the 15 elected members’ National Directorate of the National Union of Journalists of the Philippines (NUJP) less than a month after her release.

Two other IAWRT members were elected to the Union’s new Board. The elected IAWRT members include Kathyrine Cortez, elected Vice Chairperson and Ronalyn Olea for the post of Secretary-general.

Salem’s election to the two-year term national directorate less than a month after her release from prison over trumped-up charges of illegal possession of firearms, is a living testament that journalism is never a crime.

Icy, along with labor organizer Rodrigo Esparago, was arrested during simultaneous raids on Dec. 10, 2020 and was charged with illegal possession of firearms and explosives. A local court in Mandaluyong City rendered invalid the search warrant used for the arrests, and consequently ordered her release after three months in prison. Upon her election, Icy commits to take lead in NUJP’s Commission on Women Journalists with stronger unity among members of the union.

Icy was not the first IAWRT member to be imprisoned. Frenchie Mae Cumpio was also arrested over a year back and is still under prison detention. However, NUJP vowed to continue pushing for the release of Frenchie Mae Cumpio, who remains in detention over the same trumped-up charges of illegal possession of firearms and explosives as Icy was.

Also to note, is that, the Eastern Vista Executive Director Cumpio was also labeled as a “propagandist for the communists” for telling the stories of the marginalized communities in the Eastern Visayas region. Cumpio’s continued detention in Tacloban City, and the killings of 19 journalists under the Duterte administration prove that these are not idle threats therefore the need to consistent robust demand for freedom of expression and uncensored media.

NUJP continues to strongly condemn the red-tagging of its members, colleagues, and of the organization itself. The Union emphasize the vow to step up its campaign against such malicious efforts, and hold responsible those behind these systematic attacks against Filipino Journalists.

Meanwhile the election of the new NUJP National Directorate members follows a concluded nationwide and global union of Filipino Journalists Congress held earlier this month on the 11th in a blended platform that gathered more than a hundred members from 34 chapters in the country and from the Middle East and Europe last March 20-21.

The election of International Association of Women in Radio & Television (IAWRT) members on the National Union of Journalists of the Philippines (NUJP) national Directorate is positive move in making the Union stronger to fight for press freedom and journalists’ safety and as well as welfare.