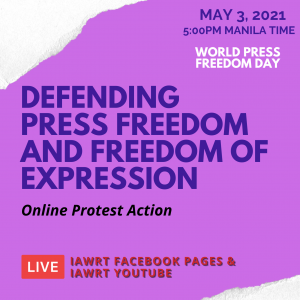 Join IAWRT on May 3, 5pm Manila time via Zoom

On World Press Freedom Day, IAWRT in partnership with the Journalism and Media International Center of Oslo Met University, and in collaboration with UNESCO-Jakarta will hold an online protest action.

The protest theme in Defending Press Freedom and Freedom of Expression, in response to continuing attacks on journalists and human rights violations that put the lives of journalists at risk.

“Harassment of journalists not only affects media practitioners but shortchanges citizens who depend on the media to provide a critical service in society – denying people access to truth.”

IAWRT members around the world have themselves been subjected to attacks.

Enikass Radio and Television reporter and IAWRT Afghanistan member Malalai Maiwand and her driver were killed on December 10, 2020.

On the same day, Manila Today editor and IAWRT Communication officer Lady Ann Salem was arrested on planted evidence and trumped up charges that were dismissed on February 5, leading to her release on March 5.

However, Eastern Vista editor and IAWRT Philippines member Frenchie Mae Cumpio is still detained since February 7, 2020 on similar patterns of arrest and charges as Salem.

The online protest action is an act of solidarity among IAWRT’s hundreds of members in more than 40 countries as the world continues to struggle in the grip of pandemic, that has also impacted on many freedoms and rights, even press freedom.

The United Nations General Assembly declared May 3 as World Press Freedom Day, observed to raise awareness of the importance of freedom of the press and remind governments of their duty to respect and uphold the right to freedom of expression enshrined under Article 19 of the 1948 Universal Declaration of Human Rights.