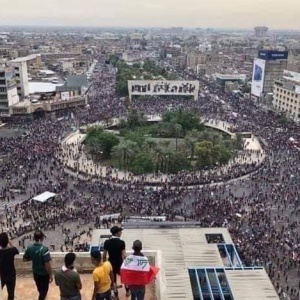 Media and women are being targeted in the midst of a governmet crackdown on mass demonstrations.

Our Iraq Kurdistan chapter reports that the targeting is happeneing as thousands of Iraqis demonstrate against government corruption, failing state services and a lack of job opportunities.

Amidst six weeks of unstable conditions in Iraq, journalists and civilian activists, including women journalists and media workers, are being targeted and are more are at risk from the danger of ongoing violence.

We, the Iraq-Kurdistan chapter of IAWRT, want to let the whole world know that with the demonstrations in Iraq at a very dangerous stage, a day does not pass without youth, young women, activists and media being targeted by government security forces and alligned militias.

The BBC and other outlest have reported on attacks on media and various shutdowns of the internet to combat the protests.

Victims from October 2019 to now, number about 320 dead and more than 11,000 wounded. People who have been victimized include countless journalists, media workers, writers and activists, including women media professionals.

One very alarming incident is the killing of civil activist and cartoonist Hussein Adel Madani and his wife Zahra. In the southern city of Basra, unknown assailants stormed the house early in the morning on October 3rd, shot and killed the couple in front of their 2-year-old daughter. The well-known activists had been taking part in protests in the city the day before their killing.

In addition to the dire situation in Iraq, journalists in Kurdistan are also subjected to violations of their rights. One of our colleagues and IAWRT member Niyaz Abdulla, 38, was arrested and tried for an article published on Draw Media, of which she is a member. She is not the author of the article and also not the editor of the group. She was released on a bail bond of five million dinars and was prosecuted under the Electronic Device Abuse Act, rather than being prosecuted under the Kurdistan Region Press Law.

We live in a country considered one of the most dangerous countries for journalists. The Committee to Protect Journalists Global Impunity Index 2019 ranked Iraq as 3rd worst country for prosecuting murders of journalists. There are 35 unsolved cases of journalist killings in Iraq over the last 10 years.

The Iraq-Kurdistan chapter of IAWRT asks journalists and media workers in the world to support the call for journalists and people’s rights to be upheld amid continuing anti-government protests and the violent crackdown on these protests.