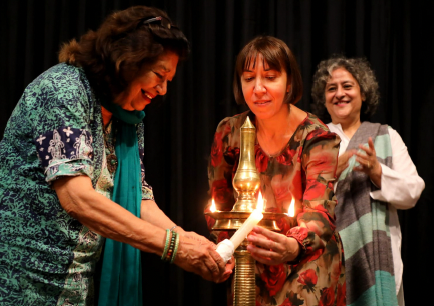 Mudri Zhinky is a festival of films from Ukraine made by women filmmakers, held on September 3, 2022 at the India International Centre in New Delhi.

Organized by the International Association of Women in Radio and Television (IAWRT) Chapter India the day-long festival, “Mudri Zhinky: Wise Women” featured 11 short films and a long documentary made by women filmmakers from Ukraine to a packed auditorium.

It was a specially curated package by IAWRT India member Smriti Nevatia. Each film portrayed a different aspect of life in Ukraine.

The event was held in collaboration with Ukrainian Female Film Industry (UFFI).

Three sessions of virtual interaction with the filmmakers were also conducted with the audience members asking questions of the film makers leading to animated discussions on Zoom.

Smriti Nevatia, curator of the festival shared that it was great to have this opportunity to create a package of films by Ukrainian women directors for an Indian audience and hoped that after watching these films viewers would be inspired to hold embattled Ukraine in their thoughts even as they enjoyed these cinematic voices from a country and culture about which they knew so little.

Aaradhana Kohli, Managing Trustee of IAWRT India Chapter who put the festival together was very happy that audiences here in India were able to see for the first time, images other than of war and destruction from Ukraine. Images of everyday life. Of love and loss. Of childish pranks and friendships. Children and families trying to cope with all kinds of ordinary everyday issues. As also existential questions.

The ceremonial lamp was lit by Mrs. Natalia Polikha, the Ukrainian ambassador

to India’s wife, and Ms. Aruna Vasudev, founder of Cinamaya and Osian and also known as the mother of Asian cinema, in a solemn inaugural ceremony in solidarity with the people of Ukraine.

The cultural attaché at the embassy of Ukraine in India Ms. Olena Ivanchuk, Katharina Görig of Goethe Foundation India and many other eminent people, students, and film buffs were seen enjoying and watching the films till the very end.

Sticky notes kept in the foyer for audience feedback and comments were a very popular initiative with many a witty comment left on the board.

To close the festival Aaradhana Kohli thanked everyone for coming to the festival and especially to the Programme Division India International Centre for collaborating with IAWRT Chapter India on the festival.