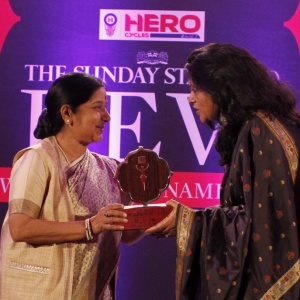 The dynamism and innovation of Archana Kapoor,  the head of the IAWRT India chapter, has been recognised in the 2016 Devi awards. They are run by The Sunday Standard, a publication of the New Indian Express Group, to recognise hard work and achievement, against all odds. The annual awards honour 20 exceptional women from the southern Indian states of Andhra Pradesh and Telengana.

Archana Kapoor was nominated for her work in founding Radio Mewat, through a NGO which she established called SMART (Seeking Modern Applications for Real Transformation). It focuses on providing communications and technological tools to transform economically backward communities. The award-winning Radio Mewat, is a community station which services and informs an impoverished district about 70 km from New Delhi.

The Managing Trustee of the IAWRT India chapter was honoured for for her contribution to women’s empowerment through the  radio station. Read more about Archana’s work.

The ceremony was held on January 11, 2016 and the awards were presented by the External Affairs Minister of India, Sushma Swaraj.  IAWRT Vice President Ananya Chakraborti, also from India, says she is proud of Ms Kapoor.

The IAWRT India Chapter elected Archana Kapoor, to lead its large membership in December following the chapter’ success in organising the highly stimulating IAWRT biennial in New Delhi, under the leadership of Reena Mohan.