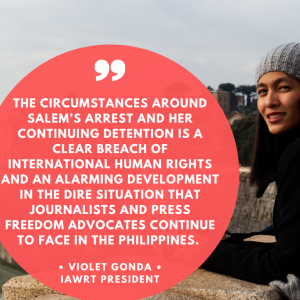 The International Association of Women in Radio and Television (IAWRT) is appalled over and strongly condemns the continuing detention of the organisation’s Communications Officer and Filipino journalist Lady Ann Salem, who was apprehended from her house on Thursday December 10.

In a short video posted by the news channel AlterMidya, Salem said she was forced to have her back turned for about an hour as the police planted evidence in her home, including firearms and explosives. This she told the Philippine media while surrounded by a phalanx of police officers who marched her to their vehicle shortly after her first court appearance on Friday.

Salem initially went missing on December 10, International Human Rights Day. Her family and colleagues launched a relentless search for her from one police headquarters to another, until a photo of her in a white police vehicle went viral. Salem was shuttled to one police station after the other before her lawyer Kristina Conti was able to speak to her. Conti says this was unlawful as an arrested individual should be immediately brought to the nearest police station. Salem was finally taken to Camp Bagong Diwa at 6PM , where she spent the night. According to  Conti, Salem was supposed to stay in the said facility until her COVID-19 swab test results were out. However, the police brought her to the prosecutor’s office the next day to beat the 36-hour window within which charges must be filed.

Her family, who  according to Philippine law should have been granted access to her, was denied this right. She only managed to speak to her lawyer on  December 11 during the inquest proceedings.

The circumstances around Salem’s  arrest and her continuing detention is a clear breach of international human rights and an alarming development in the dire situation that journalists and press freedom advocates continue to face in the Philippines. IAWRT, along with the rest of the global media community, continue to press for her release and that these baseless charges are dropping

Based in London. For interviews please e-mail: president@iawrt.org