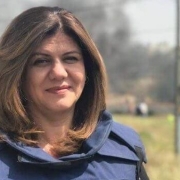 The International Association of Women in Radio and Television (IAWRT) is outraged at the fatal shooting of Shireen Abu Akleh, a Palestinian-American journalist, who worked for the Al Jazeera network. She was killed in the occupied West Bank during an Israeli army raid in Jenin, according to the Palestinian Ministry of Health, and despite wearing a jacket clearly identifying her as “Press.” Her producer was also wounded.

Such an act is a violation of the Geneva Conventions, and violates the United Nations Security Council resolution 2222 on the protection of journalists.

We are gratified to learn the United Nations Human Rights Organization is verifying facts on the ground, and we join the chorus of those expressing sorrow and alarm and demand a thorough, independent investigation into these alleged crimes.