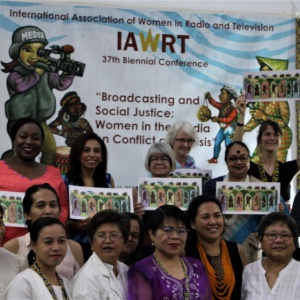 IAWRT-Philippines ensured the 2017 conference, held in Quezon City, the largest city in Metro Manila. was a lively and informative dialogue with an opening day which featured several generations of Philippine journalists who had covered stories from the human rights abuses under the dictatorship of Ferdinand Marcos to the drug killings under the current President, Rodrigo Duterte.

It was sobering to hear that 178 journalist have been killed in the Philippines since the restoration of democracy in 1987. Among them were women who exposed corruption, and the country continues to be a dangerous place for the media, with the modern addition of women journalists being brutally harassed by online trolls. From the Philippines, journalists lInday Espina-Varona (ABS-CBN), Jamela Alindogan (Al Jazeera), Jhoanna Ballaran (Philippine Daily Inquirer), and Luz Rimban (Vera Files) were joined by provincial and regional broadcasters  and reporters, Janet Buelo (Quezon province), Sonia Capio (Central Luzon), Kathleen Okubo (Northern Dispach, Cordilleras, in northern Island of Luzon) and Kimberlie Ngabit-Quitasol (Philippine Daily Inquirer, Cordilleras).

Kimberlie and Kathleen were a part of the conference’s focus on indigenous reporting. Kathleen Okubo, an Ibaloi woman, received a standing ovation after telling her story of the resistance by her people to the expansion of extractive industries beginning under the Marcos regime, and the harassment and threats to women journalists liker her. She outlined how the days of Marcos regime made life miserable for the Igorot people of the mountains, and for women journalists like her. She spoke emotionally of the disappearance of a female colleague, probably killed at the hands of the police. “The war Marcos lead – it was not lost in 1986 – it has never stopped” she said. She was arrested as political detainee during the martial law period, even during the people power revolution. She was only freed when Ramos was the president. As well as her arrests, Kathleen Okubo was also threatened, and sexually harassed because she made a decision to write about this “war” on indigenous people because “our stories were not being covered by the established media.”

Kimberlie Ngabit-Quitasol part of an ethno-linguistic group of Ifugao province in the Cordillera administrative region in the north. She also reports on the struggles of indigenous peoples against resource exploitation. “the battle continues to preserve what is left of our land ….we want the kind of development which will not destroy our lands and will benefit all, not just the rich. I speak for the lost raped and murdered and the continuing movement for a just and lasting peace”.

“I am biased but my stories are objective”— she said she tells the truth by sharing stories of real people. These stories, stories of the marginalized are usually put aside because they are hard to sell. Let’s face it, the big businesses that exploit the people are the biggest advertisers and are close to the media.”

The event included performances by the Lumad people of Mindinao who have been made refugees by attacks on their schools and being forced off their mineral rich land on behalf of mining companies.  They are living in huts not far from the conference venue on land supplied by the nearby University. Federico Sulapas Dominguez or BoyD the artist who designed the conference logo below, also sang for the delegates.

The IAWRT safety handbook for women journalists a practical guide bases on reals experiences, written by Abeer Saady, was also launched during the event. it is available for download here.

The 37th Biennial coincided with the gathering of the Association of Southeast Asian Nations and the former IAWRT president Gunilla Ivarsson took the opportunity to publicly urge the world leaders to uphold media freedom and halt attacks on journalists. See media statement attached below.

The reports of the conference is available for download in publications. Summaries and notes of proceedings of the 2017 Biennial Conference are available to members here.

IAWRT Statement on the 31st ASEAN Summit in the Philippines 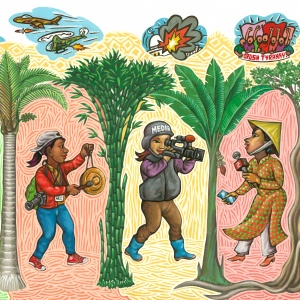