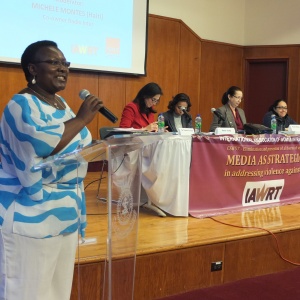 The International Association of Women in Radio and Television (IAWRT) held a parallel event at the 2013 57th Session of the United Nations Commission on the Status of Women (CSW), which took place at the United Nation Headquarters in New York in early March. The theme of this year’s CSW was ‘Elimination and prevention of all forms of violence against women and girls’. It is estimated that every second a woman or a girl somewhere in the world experiences some form of gender-based violence.

This CSW, held on 8th March 2013, was the fifth event IAWRT held since its first side event in 2007, titled, Media Partners: Sharing Technology, Information and Communications for Effective Outreach.  The 2013 theme for its side event was: Media as Strategic Partners in addressing violence against women and girls – hazards facing female journalists. Despite bad weather, including snow and high winds, over 100 people showed up for the event, an indication of the appeal of this subject.

Every year thousands of women and some men from nook and cranny of the world, converge at the United Nations CSW to discuss ways and means to prevent gender based violence. One of the major motivators to travelling to New York to raise voices and to lobby member states to commit toward the elimination of gender-based violence.  According to UN Women, over 6,000 women participated in this year’s two week long CSW.

The major goal of this event, sponsored by the USA Chapter and led by a member of the IAWRT board, was to discuss the criticality of the media as a major tool in the protection of women and girls and the prevention of gender-based violence.  Another part of the goal was to gather information from the panel discussions and audience input to produce a White Paper encouraging UN Women, CSW, and the broader United Nations, to make media inclusive at all level of the campaign against gender-based violence.  In doing this, we hope to highlight and emphasize the seemingly forgotten “Section ‘J’” of the Beijing Declaration, “Women and the Media” which provides all the guidelines to ensure media women are given equal treatment not only by the media institutions but also that governments implement the declaration to ensure the protection of female journalist and remove any impediment preventing them from doing their work.  Also, to be included in this paper is UN Security Council Resolution/1325 on women’s equal rights at all levels of society.

The panelists were carefully selected and included representatives from a range of media: television, radio, print and social media who are veterans in their field and have tried and tested the media in their quest to highlight violence against women and girls, some of them victims of the violence they were reporting and/or still in the heat of the fight for liberation and are facing daily threats to their lives.

IAWRT President, Rachael Nakitare, opened the side event by welcoming everyone and briefing them about IAWRT, the vision and mission.

Just minutes before the discussion, panelist, Abeer Saady, Vice Chair of the Egyptian Journalists Syndicate, received a very disturbing text message which she shared about a female journalist who had been finger raped and raped by new crowding techniques being used against female journalists in Egypt.  We learnt that entities in that country are actively training men and boys how to entrap the female journalists in the street.  (click here for Saady). She said that although women are the majority in the society, still they are marginalised. It has taken the actions of a few brave victims to speak out about abuses to raise awareness, Saady added. One such survivor agreed to be interviewed on television to talk about abusive virginity testing, although she was castigated for attacking a traditional practice. Some gender activists have also taken to showing television programmes that highlight violence against women such as a TV series called “Fatima”, which talks about women raped by rich men and then forced to marry their rapists.

Saady added that radio television drama is an effective way to educate the population, including government about violence and it is now being used in Egypt effectively. Although women are not a minority group in the society still they are marginalised. It has taken the actions of a few brave victims to speak out about abuses to raise awareness.

The panelist from India, Ananya Chakraborti, who is also IAWRT board member, stressed that the medium of film has attracted her own government through her activism and documentary on trafficking in India. (click here for Chakraborti) . She said the use of film is an effective tool to end trafficking of girls, because not only does film draw attention to the practice, it motivates action to save these girls from their captors and prevent others from falling victims. The anti-trafficking campaign in West Bengal India is an example where awareness of trafficking is highlighted through different kinds of media such as songs/music that are used in villages, and the social media such as Facebook played an important role in the recent high profile case of the 12 year girl who was gang raped in India that sparked a national and international outcry about violence against women in the country.

The government responded to her film and has begun to pay close attention to the endemic problem plaguing women and girls in the country.

WBAI/Pacifica Radio’s co-host of the popular Rape Forum, Rebecca Myles, emphasized “the gap between media coverage and the lived experience of women and girls and sexual violence.” A radio programme such as “The Rape Declaration Forum” not only provides a meeting place on the radio where survivors of rape and other gender-based violence can call in and speak out about what happened to them. But it also gives them the opportunity to raise their voices, and help to educate others while healing begins – valuing survivor’s voice. Radio allows survivors to speak to the many without fear of repercussions.  It is the platform for women who are afraid to come out and talk and get strength from listening to others who have endured similar abuses.  (click here for Myles)

Although the general mantra and practice of mass media is “if it bleeds it leads”, Pamela Falk, President of the United Nations Correspondence Association, and reporter for CBS News Radio and Television, underscores that a story doesn’t have to bleed to lead. Mass media, need to take on the task of education and prevention of violence against women and girls, by not only reporting violence, but by reporting state’s attitudes toward the violence.  She shared her own experience of being shot at while reporting in conflict zones, just because she was a woman. (Click here for Falk)

The audience made meaningful contribution using their own experience with media to help in fight to end violence against women and girls.

Moderator Michele Montas, former spokesperson for UN Secretary-General Ban Ki Moon, a journalist herself, directed the discussion with much ease, which led to the success of IAWRT side event. For her part, she opened by highlighting very profound and thought-provoking story (click her for Montas). Montas lives the violence when her radio station, which was owned by she and her husband were attacked with guns and mortars to silence them. She was exiled in the US along with her husband and returned home only for her husband to be assassinated. Her nightmare is real and therefore, she drove the discussion with much passion.

IAWRT members were invited to FOKUS’ breakfast meeting at the CSW and were honoured to be there. For some IAWRT members it was our first meeting with FOKUS. This encounter was very informative as it brought to the fore and gave those unfamiliar with FOKUS a broader perspective of the phenomenal work of our major funder and what FOKUS is doing to prevent and protect women in developing countries working and funding the many organizations they support.

The IAWRT 2013 Regional Meeting was held in New York during the CSW. Representatives from the USA, Norwegian, Indian, and Kenyan chapters briefed the gathering on activities of their local IAWRT chapters. The chapter reports were succinct and most encouraging.

The evening ended with IAWRT honouring one of the founding members of the association, Leila Doss, with a Lifetime Achievement Award. Leila has been a member of IAWRT since 1947, after the Second World War, when the original name was International Association of Women in Radio. Leila was born in Egypt in 1921 and started her media career in her home country as the first Egyptian woman broadcaster and later became one of the earliest employees at the newly established United Nations Department of Public Information in New York 1947and worked in various information centers until she was appointed assistant secretary-general for personnel services. She has written and lectured widely on media and international affairs since her retirement in 1982 and continues her membership in IAWRT and serves as one of the Alternate Representative to the UN for IAWRT.

IAWRT welcomed new members and the panelists to the dinner. All Panelists expressed interest in becoming members of IAWRT as well as some audience members.

The IAWRT is a non-governmental organisation in consultative status with the United Nations Economic and Social Council (ECOSOC) with three appointed members who attend meetings and brings report to the organisation. It also has a prominent seat on the UNDPI/NGO Executive Committee where one of its members holds the coveted seat of 2nd Vice Chair.  There are 10 chapters and over 400 members globally.  IAWRT’s projects focus on strengthening media women’s capacity to contribute effectively to the development of society, especially to end violence against women and girls.  IAWRT’s work has been to highlight civil society initiatives with a view of ensuring visibility and attention by the authorities.

IAWRT members have been actively involved in civic education using their respective media outlets. All the three main projects collaborate with NGOs and civil society, communities in particular in addressing the issues of trafficking, forced disappearances and FGM.

IAWRT CSW Side Events to date