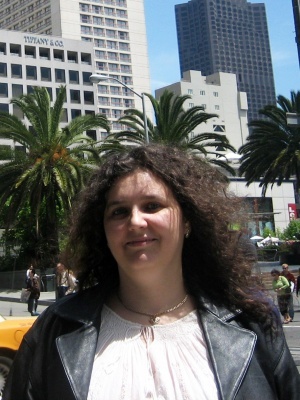 Name: Diana Iulia Nastasia. Many of my students call me Dr. D.

Where do you live?

A question that doesn’t currently bear an easy answer for me ☺ There is a country I am a citizen of, a country my home is in, and what I consider myself to be.

I am a citizen of Romania, where I was born, I still pursue various professional activities related to lecturing and research, and I reside for specific periods of time each year until I fulfill my 2 year home country residency requirement that came with the Fulbright fellowship I held several years ago.

My home however is in Saint Louis, MO, the United States of America, where I live together with my husband and two daughters, and where my family moved after I and my husband both earned our Ph.D.s in Communication and Public Discourse in the U.S.

I consider myself a citizen of the world, and not just because I have traversed various countries and cultures. I view borders as constructs – constructs whose objectification and politicization have dire consequences on the lives and well being on people worldwide, and constructs that we can collectively choose to take for granted or can choose to openly address.

I am an educator and a scholar in communication and media studies. I have also been involved in advocacy and activism project.

My research focuses on voices and portrayals of marginalized populations including women, children, and immigrants. In recent years, I have worked on several large scale research projects not just as a scholar but also as a project manager. I am currently a co-coordinator, together with Greta Gober, on the IAWRT media monitoring research project, which looks at gender equality and social justice issues in public media venues in eight countries, and which has already resulted in a presentation at the United Nations’ 59th session of the Commission on the Status of Women in March 2015. I was a national expert for two Eastern European countries in a project of collection of best practices regarding women and the media for the European Institute for Gender Equality. I took the role of Regional Coordinator for Eastern Europe in a project of the International Women’s Media Foundation, and in that capacity I provided oversight for data collection and analysis in eight Eastern European countries, and contributed background information and result writing. I have worked on two projects sponsored by Internationales Zentralinstitut für das Jugend- und Bildungsfernsehen based in Munich, Germany: a study of how girls from four countries (the United States, India, Fiji, and China) perceive ethnically diverse female characters in cartoons of the Disney corporation (including Pocahontas, Jasmine, and Mulan); and a study of how children worldwide perceived media representations of the Japan 2011 earthquake, tsunami, and nuclear power plant disasters. My research has resulted on over 150 conference presentations, and published chapters in edited volumes at Routledge, Palgrave, Peter Lang, Nova, and Fordham University Press as well as articles in U.S. and European journals.

I grew up in Romania, in Eastern Europe, at the time when my home country was under a harsh communist dictatorial regime, which kept the population under poverty and in despair. One of our few hopes was getting an education, acquiring knowledge, conceptualizing the world not as it was but as it should be. The communist regime was marring educational processes with political propaganda, however I had a few teachers who were not afraid to encourage and even urge their students to develop intellectual curiosity and critical thinking.

As I went to college right after the fall of communism, becoming an educator was a choice I made as I was seeking to contribute to forming new generations in the spirit of social justice. I also became a researcher as I realized there is need for data-based evidence to document the issues and problems of those rarely heard and affected by various forms of injustice.

I love seeing how, on the duration of an academic semester, upon reflecting on the impact of gender, ethnicity, culture, or power on communication and the media, students get not just new concepts that they can employ in their personal, professional, and community lives, but also a new outlook on the world.

I am also passionate about seeing how patterns emerge from research data I worked on collecting, and how such patterns can help uncover for example who are those tacitly socially privileged and how having such social categories impacts society as a whole.

While there are challenges in both teaching and research, rewards definitely outnumber challenges. There are times when students seem more interested in leisure and entertainment than in working towards reaching their potential and contributing to public good, but there are also many other times when a teachable moment makes students aware of and capable of articulating, for example, the uses and abuses of technologies and the media. There are also moments, when doing research, when one could be discouraged, for example because of insufficient funding, differences in goals and desired outcomes between various contributors and stakeholders of the research, or failure to have an immediate policy impact; but those moments too are overcome when seeing concrete results of research. To give one example, scholarly efforts to evidence the portrayals of girls in stereotypically feminine gender roles in children’s television have lead to a diversification of girls’ depictions even as industry representatives have been trying to dispute such findings.

As I mentioned above, I like the “aha” moments that both teaching and research can generate among students and professionals of communication and the media. There is little that I dislike about my professional activities, and it’s mostly hurdles that can be surpassed.

My long-term goals are related to educating my students as well as my own two daughters as persons who are sensitive about issues of culture as well as of power worldwide, and are themselves willing to put effort into making this world a better place. I will also continue to seek to contribute to research and service projects that can help bring to the forefront of society and the media the voices and ideas of the underprivileged and oppressed.

YouTube link of your documentaries or radio piece or book wrtitten? Please provide a link if possible.

Links to some recent publications (book chapters and articles):

Both teaching and research require passion and patience, but if done well can change lives and bring social change.

I am an educator, a parent, a scholar, a critic of the media and of various other power structures, a believer that social, cultural, and environmental justice is within reach and can be attained within my own lifetime with acknowledgment and collective effort.