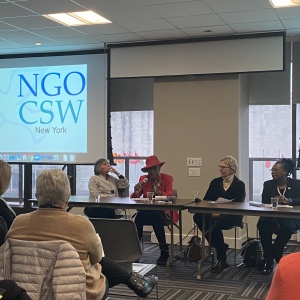 Two months before the sixty-fourth session of the Commission on the Status of Women (CSW 64), over 60 activists and NGO representatives gathered at the NGO CSW monthly meeting on 16 January 2020 to discuss how to create a gender-equal world by shifting power through participation and accountability at the United Nations (UN) Church Center in New York.

Sheila Dallas-Katzman, President of IAWRT USA, unpacked the title of the meeting, Create a Gender-Equal World by Shifting Power Through Participation and Accountability using a media and CEDAW framework.

“When we speak about gender equality, we are speaking about human rights for everyone. I don’t want to shift power. I want to balance power. And to do that, we need the participation of the media at every level,” she said.

When spoke about media and the MeToo movement, she highlighted that we need the media now more than ever.

“The media has jumped into the MeToo movement as if they have always been there for us the whole time. But that is the same media that have been abusing us through distorted images and that is presenting us in a certain way,” she said

According to her, participation is the key to create new narratives and institutions to achieve gender equality.

“The media tell us what to think about, not how to think, so we have to make the media responsible, with responsibility comes accountability,” Katzman said.

Focusing on the importance of NGOs and civil society to hold governments accountable, Ambassador Koki Muli Grignon discussed the role of policies and legal frameworks in perpetuating gender inequalities.

“Legislation is actually nothing if it is not implemented. We have to create institutions that can implement those laws toward gender equality,” she said.

She also emphasized the need of allocating budgets to finance gendered-approach projects and divide the battles into small steps to success.

“There is nothing more political than resources and the location of those resources. Through them, institutions can bring different perspectives and energies to implement frameworks towards gender equality,” said Grignon.

Grignon echoed that there is still a lot to be done to achieve gender equality, but activists should remember their success as a strategy to keep moving forward.

Aparna Mehrotra, director of UN System Coordination Division in UN Women, has been working with the United Nations for over 30 years in several capacities, including serving as the Focal Point for Women in the U.N. system monitoring and reporting on issues relevant to the status of women and their representation.

“When you articulate with the HR what the gender resource is, they can’t say they don’t know what to do. Enforce the behavior, and the actions will follow,” she said.

She called attention to the Women’s March, which took place on January 18th, 2020, and the importance of showing support and building a solidarity network.

“Sometimes we are so immersive in change that we get tired. It is imperative how you break down your work into more manageable pieces and build a solidarity network,” she said.

Dr. Yasmine Ergas, director of the Gender and Public Policy Specialization at Columbia University’s School of International and Public Affairs, focused the conversation on the importance of participation, accountability, and gendered institutions.

“When we do not have participation, we don’t know how to participate. Exclusions lead more and more exclusion,” she said.

She also emphasized that knowledge informs participation, which is an active subject of democracy, and that we are in a dangerous era of backlash against gender and women’s rights.

“We are in trouble when civil society and organizations are not allowed to connect across borders, especially because so much of our strengths is the ability to form a transnational coalition,” she said.

Audience members showed great interest from their questions.  For example, Queen Mother (Doris Blakely) was interested in media coverage for Consultation Day at the Apollo Theater in Harlem. She asked what can be done to attract the media to cover the event.

“The Apollo Theater has a vast media network link and NGO CSW should invite them to be partners of the forum. This way, the event may stand a chance of some coverage,” Katzman suggested.