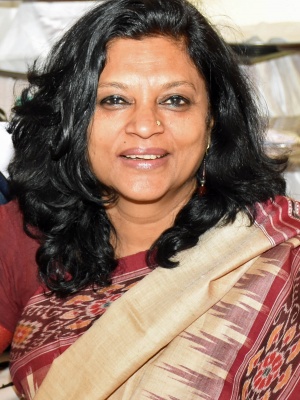 Archana is a Filmmaker & Broadcaster, based in New Delhi, India.

As a documentary film maker, I have worked with farmers, weavers, labourers and socially excluded communities. At times I felt that I used them to make a film, but never went back to help them get over their problems or misery. In 1997 I started a ‘not for profit’ and began working in an extremely impoverished and marginalized community close to Delhi, the capital of India. In 2010 I set up a community radio and started to use information to empower the community. Today we broadcast for over 14 hours a day and have trained over 100 community members to become broadcasters. Our radio station has won two national awards and several other commendations for the work we are doing.

Working with the most vulnerable communities is extremely challenging. Giving women the confidence to speak out is most satisfying. After seven years of constant struggle it is heartening to see women defy all kinds of restrictions to come to the radio station and participate in the programmes.

As a filmmaker, we move from one theme to another and that is something I don’t like. I enjoy meeting new people, exploring new ideas and traveling to new locations for my films. I like the diversity of themes that we work on. As a broadcaster I like the idea of looking at information as a tool for empowerment. I also like the idea of a holistic approach and of working within a particular community defined by its geography. The community broadcasting sphere, unlike filmmaking has an immediate impact and is extremely interactive and engaging and the space for making independent programmes is shrinking and government control on all forms of media is increasing.

My strongest assets are that I am not afraid of hard work and am extremely calm in periods of crisis. I have leadership qualities and am a team player. I respect diversity and am comfortable working with people from different cultures. I am task oriented, organized and have a very target driven approach. I have an eye for detail and have good oral and written communication skills. I am perceptive and am a visionary. If I undertake a task, I give it my best.  I am an achiever and have the ability to turn an adversity into an advantage.

I am an award-winning filmmaker and community broadcaster. I have been featured in many journals and magazines for the work I have done in empowering underserved communities. I am a good trainer and have a good knowledge of gender and politics in India. I understand issues pertaining to minority communities rather well. I am well-travelled. My areas of knowledge are community radio and community media, documentary filmmaking, gender and women’s empowerment. I have done several films on disaster management and have worked on all kinds of disasters.

It has certainly inspired me. As Managing Trustee, IAWRT India, I have acquired new skills in terms of organizing film festivals and enhancing skills in organizing events.

I would like to make a difference in the lives of women through my work, I would like to work with women from different countries and create opportunities for experience sharing and learning.

My only advice is that they should be honest to themselves. They should be patient and perseverant. They should learn to stand up for what they believe in and now bow down to pressures and power games. Life is tough, but if you believe in yourself, you can fight for yourself and your values under all circumstances.

Don’t give up. Work hard, believe in yourself, there will be many who will say Why to you but very few who would say Why Not? Look out for such people and stick to your own goals.

Links to some of Archana’s work

Change is in the airwaves in rural India

FM of the masses

Community radio to take care of consumer complaints in Mewat

Forget Newspapers or the Internet. Indian women are betting on one of the oldest forms of media

Community Radio Inspires Women In Isolated Village To Express Themselves

Big data to cameras: How technology is empowering Muslim women