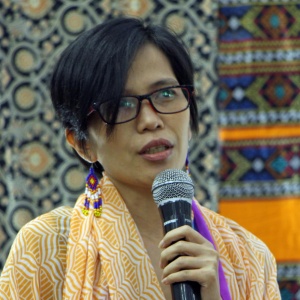 The IAWRT Safety Handbook for Women Journalists, launched in November 2017.

Ronalyn V. Olea takes a look at what the handbook can do for female media workers.

Security and safety for journalists (especially for women journalists) is something that’s not taught in schools and rarely discussed in newsrooms. We learned the principles of journalism, the basics of newsgathering and other reporting skills and the tools for critical thinking and analysis but never how to prepare ourselves for threats and challenges we might encounter as women journalists.

Abeer Saady’s book, What if…? Safety Handbook for Women Journalists, provides practical tips for women journalists on how to minimize risks when covering sensitive and dangerous assignments.

The handbook’s main strength is its compilation of experiences, not only those of Saady as a journalist for 27 years, but also those of other women journalists who faced difficult situations.

Saady underscores the importance of physical, psychosocial and digital safety and security.

Looking back at my own experiences and those of colleagues in the alternative media, I realized most of us tend to overlook our own safety and security when in the field.

How to protect and minimize harm to our physical safety is something we learned from experience. We only bought a helmet after our colleague covered a violent demolition in San Roque a few years back. She was crying while tear gas canisters and stones were thrown from all directions. Unlike colleagues from the wire agencies, our reporter did not have a bulletproof vest and other protective gear. After that, we decided we need that type of gear but due to limited resources, we could not purchase even just one set.

But yes, as Saady points out in the handbook, risk assessment, profile management, situational and digital awareness and a safety plan are also crucial.

Many of the tips shared in the handbook are practical enough for any journalist or newsroom to do. Going back to the incident I mentioned earlier, the newsroom knew that the demolition of shanties could turn violent but we did not have a safety plan. Our reporter went there without a grab bag (which should contain water, snacks, and a first-aid kit, amongst other things). After the chaos, she called up two of our colleagues to ask for help. We did not have any communication plan either. She was fetched by our Editor in Chief, from the site.

We usually do one-woman coverage, even for out-of-town assignments, due to limitation in resources. Looking back, I managed to survive with the help of people’s organizations. Almost always, they assigned somebody to assist me as I do my job. This proved helpful when I went to cover a fact-finding mission in Hinoba-an, Negros Occidental about the impacts of mining on local communities. My buddy served as my interpreter during interviews, and he never left me when security guards of a private mining company intimidated the group.

The handbook provides tips on what to do when stopped at checkpoints, arrested during coverage, when kidnapped or held hostage, and when caught in crossfire.

Psychosocial security is something that’s not always being attended to. A colleague working for a community radio could not sleep for three months after covering a violent dispersal of farmers in North Cotabato and to this day, she feels the trauma of witnessing a farmer die beside her. The handbook suggests ways of dealing with survivors of such trauma.

The handbook suggests the following ‘how to’ for colleagues who have experienced trauma: (Its useful pronciples can also apply to reporting on survivors of trauma)

What if…” also provides tips in dealing with online harassment. Some of our female colleagues in the dominant (or manistream)  media were threatened with sexual assault on social media by those alleged to be Presidental supporters. For such cases, the handbook suggests naming and shaming the online harasser, and moderating the comments section and preventing people from being anonymous, amongst others.

A Norwegian journalist who became a victim of online harassment believes that a better solution would be to develop what she calls harassment competence, such as learning how to distinguish between various forms of bullying, as her interviewees did. She suggests distinguishing between ‘the angry’, ‘the crazy’, and ‘the dangerous’ bullies. “The ‘angry’ are people you can respond to, and perhaps even make them understand that you’re a person who might get hurt by their utterances. Harassment coming from ‘the crazy’ and ‘the dangerous’ had better be ignored…since a reply often makes the bullying even worse,” she shared.

In this time of social media, women journalists should take precautions in protecting their digital safety and security. Some of our colleagues in the dominant media reported that their social media accounts were hacked. Logging in by default (remembered passwords) to one’s emails or social media accounts through applications on mobile might be easy but compromises one’s safety and contacts. The handbook lists tips on how to do a digital cleanup.

The handbook has a separate section on ethical safety decisions. The point is to ‘do no harm’.

Another section is devoted to legal safety. Knowing one’s rights as a journalist and the libel and other media laws in one’s country, or one being visited, is helpful.

The handbook, which can be downloaded from the IAWRT’s website, should be read by every woman journalist.

Creating an environment where women journalists can perform their job without fear or danger is something that we must continue to struggle for. Yet a  2013 global survey of security risks for women journalists revealed that a majority preferred not to report gender-based violence for fear of losing their job or of being stigmatized.

Twelve women Filipino journalists have been killed in the line of duty since the restoration of democratic institutions in 1986; four of whom died during the Ampatuan massacre on Nov. 23, 2009. Not one of the perpetrators of these murders has been brought to justice.

Every journalist must fight impunity, which engenders gender-based violence and media murders.

Ronalyn (pictured) is a non-mainstream media practitioner in the Philippines and member of the IAWRT,  This article is adapted from original publication in