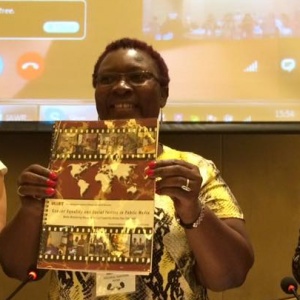 The Gender Equality And Social Justice In Public Media report has been  launched at the IAWRT Biennial Conference in New Deli. The eight country study of public radio and television, lead by Greta Gober & Diana Iulia Nastasia, measured representation of gender and other social justice measures such as age, ethnicity, and sexual diversity, across four continents and eight countries. ESP

The Full report is available, or listen to the researchers, Greta Gober and Dr Diana Nastasia explain how their monitoring project of public radio and television has found a very narrow spectrum of opinion which is predominantly male and middle class and not representative of the populations where they broadcast on Astute Radio .