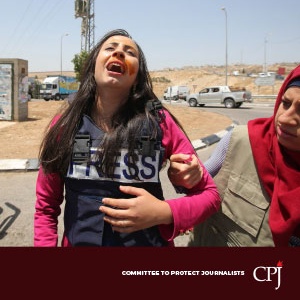 The Committee to Protect Journalists has launched its annual publication, Attacks on the Press: Gender and Media Freedom Worldwide for 2016. Through a number of thought provoking and personal essays, the edition examines sexualized violence, online harassment and the intersection of gender and press freedom.

The Deputy Editor of Colombian newspaper El Tiempo Jineth Bedoya Lima provides a moving account of how she has moved thought the stages of survival “to recognize myself as a victim, then as a survivor, and now as an activist defending the rights of women.” On May 25 2000, she was kidnapped at the gates of La Modelo prison in Bogotá. Recovering from bashings and rape has been a long journey, as Ms Bedoya writes, “Such a violation is not like a fist or a blow; it is a crime that destroys our lives”

Her campaign No es Hora de Callar” (It’s not time to be silent) is reflected across Gender and Media Freedom Worldwide, in essays about the burden of harassment of women journalists, whether in person, ot online or by internet trolling,

Other contributions examine the challenges and consequences of gender-based discrimination in China, Libya, Uganda and Kenya. However the advantages of female journalism is argued in a fascinating contribution by Alessandria Masi, describing the use of social media and her gender, to gather first-hand information from Islamic State members on  recruitment strategies and the kind of society they want to create. In another, Erin Banco argues that in the Middle East reporting is enhanced by being able to speak candidly with women.

“As this volume makes clear, victims of sexualized violence–mostly women, but men as well–are speaking out” says Joel Simon the Executive Director of the Committee to Protect Journalists, “The reality of sexualized violence–not to mention the other challenges that women face in bringing us the news–should never be used to limit opportunities.”

“In 2016, CPJ will make a more concerted effort to document incidents of sexualized violence and tag them on our website. We will also be speaking out more, using this book to organize a series of events and discussions” he says.

The full report is available here.