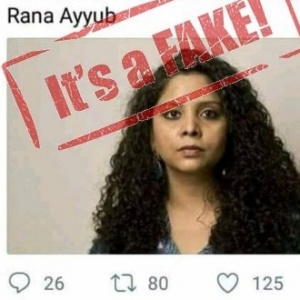 Mumbai-based investigative freelance journalist Rana Ayyub became the subject of online threats after a parody account on Twitter in April falsely attributed a quote defending child rapists to her.

“Minor child rapists are also human, do they have no human rights. This Hindutva Government is bringing ordinance for death to child rapists just to hang muslims in larger numbers. Muslims aren’t safe in India anymore,” said the false quote by an account @republicTV.

As a result, Ayyub, who investigated communal riots in Gujarat in 2002, was subjected to various online threats, including an exhortation to gang rape her. According to a statement by the Network of Women in Media in India, the threats warned her to “stop talking against Hindus and [Prime Minister Narendra] Modi.” Ayyub’s address and personal phone number were also published on social media.

Ayyub also told the Committee to Protect Journalists (CPJ) that her face was morphed onto those of women in pornographic videos, and that trolls on social media told her to “leave journalism because prostitution is your cup of tea.”

The CPJ has called on Indian authorities to conduct a thorough investigation into the threats against Ayyub. As of April 26, the police have not filed a First Information Report, a document filed at the start of an investigation in India. Meanwhile, the Twitter account that posted the false quote has already been deleted.

In 2016, Ayyub self-published a book, Gujarat Files: Anatomy of a Cover Up, which examined the role of government officials, including then Gujarat chief minister Modi, in the riots.

Since the book’s publication, Ayyub told The Commottee to Protect Journalists (CPJ) that she has been harassed by social media accounts that she described as supporters of the prime minister. “In the past, they’d troll me on the grounds of being a Muslim, being a woman and called me an ISIS supporter,” she said.

According to a recent report by Reporters Sans Frontiers (RSF) cyber-violence constitutes 43.8% of attacks against women journalists covering women’s issues. Cyber-violence includes increasingly violent and sexist online threats, with cases most common in India, the United States and France.

“Fake news,” or false information being circulated on social media is also of increasing concern in the information landscape. The case of Ayyub shows that journalists are also becoming victims of disinformation campaigns as a means of intimidation and harassment, with women journalists more vulnerable to the sexist and violent nature of such attacks.