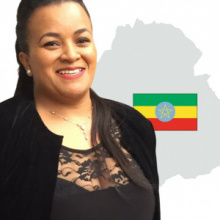 These days, everyone is a self-proclaimed journalist just because they opened a YouTube or blog or any kind of platform on social media networks, and some talk and write without checking the facts. Unfortunately, people of any age tend to believe what they watch or hear just because it is on YouTube and the account has several followers and subscribers.

My country, at this time of war, at least needs those who can talk sense and facts. We need to debunk falsehoods and discourage them from spreading. This is a very important role of journalists and civil society actors.

Practicing fact-checking or creating an environment of fact-checking will help society to think twice before disseminating or spreading what they hear and hopefully push individuals and citizens to do fact-checking themselves.

Find below some stories and issues I have fact-checked:

The image has been used on other websites to show different events not related to Ethiopia.

However, Google reverse image results reveal that the photos are taken on different occasions at different times of the year. The first photo is taken from the BBC News website published in 2016 when Joe Biden( then vice president ) visited Ireland and the person watching TV with him was Irish prime minister Enda Kenny watching a soccer match.

The second photo was taken from the Egypt information service website when President El-Sisi Participated in a virtual meeting with Heads of States and Governments on Climate on September 21, 2021.

The third photo was taken from the US president’s Twitter account when he was watching The NASA Perseverance rover safely land on Mars on February 19, 2021.

Pesacheck looked into a Facebook post with an image claiming to show president joe Biden, Irish prime minister Enda Kenny and president al Sisi watching television events regarding Ethiopia and finds it to be FALSE.

FALSE: The Kenya-Ethiopia border has not been closed

The NPS clarified that Kenya’s border with Ethiopia has not been closed, noting that they have only increased security at the border.

On November 3, 2021, Citizen TV Kenya reported that the Kenyan government had closed its border with Ethiopia.

“Kenya-Ethiopia border closed: Kenya closes the border over ongoing fighting in northern Ethiopia. Ethiopia has declared a six-month nationwide state of emergency. Tigrayan fighters claim to have seized major cities in the north,” read the Tweet by the media outlet.

However, in a tweet on November 4, 2021, Kenya’s National Police Service (NPS) denied the claim that the Kenya-Ethiopia border had been closed, saying they have only increased security along the border and the security situation remains calm.

Additionally, no other credible media house has reported the news about the closure of the Kenya-Ethiopia border.

On November 3, 2021, NPS spokesperson Bruno Shioso issued a statement noting that the Government of Kenya was concerned about the recent and unfolding events that disturb the peace and stability in neighboring countries and the greater East African region.

“As an immediate neighbor to some of the affected countries, Kenya may be adversely impacted by the consequences of the events. The National Police Service has heightened security along the Kenyan borders and in other critical areas,” read the statement in part.

Ethiopia declared a six-month state of emergency on November 2, 2021, following an escalation of the Tigray conflict which began in November 2020.

Pesacheck investigated the claim that the Kenyan government closed its border with Ethiopia and finds it to be FALSE.

FALSE: The UN did not send war equipment to the Tigray region.

The Ethiopian Embassy in Djibouti dismissed the claim saying that the vehicles belong to the Ethiopian government, not to the UN.

This Facebook video claiming to show that the UN is giving war gear including tanks to the Tigray region is FALSE.

The video post on August 22, 2021, claims that the vehicles are traveling to the Tigray region.

The video shows different military-like vehicles on the road and the narrator says in Amharic and Afar language, “The vehicles are coming from Djibouti, as it is seen the vehicles have UN and UNAMID marks on them”.

UNAMID is The United Nations – African Union Hybrid Operation in Darfur, which completed its mandate on 31 December 2020.

However, the Embassy of Ethiopia in Djibouti released a statement confirming that the UN branded vehicles indeed traveled from Djibouti but to Addis Ababa, not to the Tigray region.

The embassy confirmed that the vehicles belong to the Ethiopian government, not to the UN. The vehicles used to serve under UNAMID in Darfur. The embassy on its Twitter page also said the vehicles will be rebranded as #ENDF Ethiopian Defense force.

HOAX: There is no Norwegian visa lottery program

For the last few days, there have been links sent to many people using WhatsApp and mobile text messages (SMS). The text informs that the 2021-22 Norwegian resident card visa lottery application is open and anyone eligible can apply.

The link showed that The Norwegian Directorate of Immigration the UDI is responsible for processing applications from foreign nationals who wish to visit or live in Norway.

The Norwegian Ministry of foreign affairs sent a warning to all people explaining that there is no visa lottery plan to Norway, and the text, as well as the site that leads to the link, is a scam and the government of Norway has no knowledge about it.

Pesacheck investigated the claims posted on Facebook and WhatsApp about the Norwegian visa lottery and finds them to be HOAX.

Partly false: -Trading Khat did not ban in Dessie

Several Facebook and Twitter posts on August 31 2021 are claiming that starting from tomorrow the residents in the city of Dessie will not be able to chew Khat, shops cannot sell khat and no one is allowed to trade it.

According to many posts written in Amharic, the city administration’s restriction is especially for the youth in Dessie until the end of the campaign. This decision will be extended to all cities in the Amhara region soon. Dessie is a city and a zone in north-central Ethiopia. Located in the Amhara Region.

The city Mayor Abebe Gebremeskel confirmed to VOA that the restriction is made because the gathering of people to chew Khat is becoming the source of dissemination of wrong information and creating instability for the people and displacement. He also explained that the restriction will continue until the conflict is over.

He also explained the restriction is specifically on the gathering and chewing of khat, not on the trading of khat, since so many depend on it, making it difficult to completely ban it.

The decision was reached after the locals raised the issue, and was in consultation with more than 3000 merchants, the mayor explained.

The post reached a hundred thousand people within a few hours. But most of the photographs used of police officers burning piles of khat were not taken yesterday as claimed. The same photo was used a year ago for different news articles.

Pesacheck has investigated the claims posted on Facebook and Twitter that claim the administration in Dessie has placed a complete ban on khat trading and chewing and finds it to be partly False.