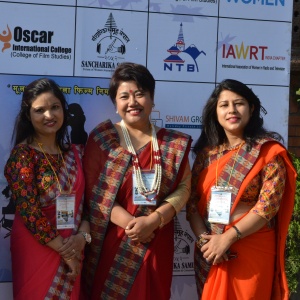 Sugarika KC, the master of ceremonies of the event initiated it by welcoming the audience and introducing the IAWRT Nepal Chapter. Bandana Rana, Expert Member, UN CEDAW (United Nations Convention of the Elimination of all Forms of Discrimination against Women) inaugurated the film festival by lighting the panas. In opening remarks, Anupa Shrestha, the President of IAWRT Nepal said “The main objective of IAWRT Women’s film festival Nepal is to encourage women film makers, to screen the films made by women all around world and to encourage the film festival culture.

She added, “This is not a just one day event but also bonding and sisterhood between two IAWRT chapters, India and Nepal. We warmly welcome IAWRT India Chapter to Nepal.” 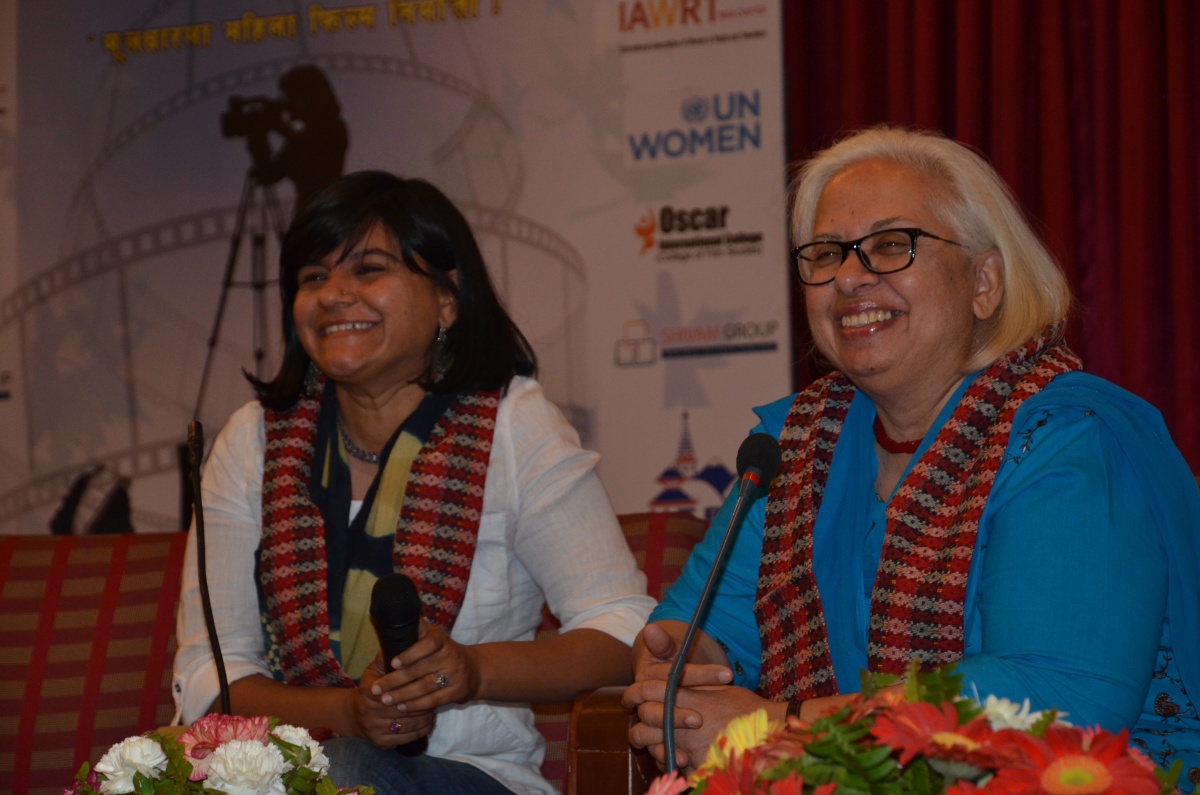 Velvet Revolution a IAWRT documentary directed by Nupur Basu was the first to be screened in the festival.  The 57 minute long movie features profiles of women journalists from India, the Philippines, UK and USA. The country directors of this documentary are Illang Illang Quijano (Philippines), Deepika Sharma (India), Pochi Tamba Nsoh and Sidonie Pongmoni (Cameroon) and Eva Brownstien (USA/Bangladesh).

The screening was followed by an interaction with one country director Deepika Sharma and editor, Reena Mohan. They shared their experience of making the documentary and the challenges of working with six different directors from different countries. More information on the project here. 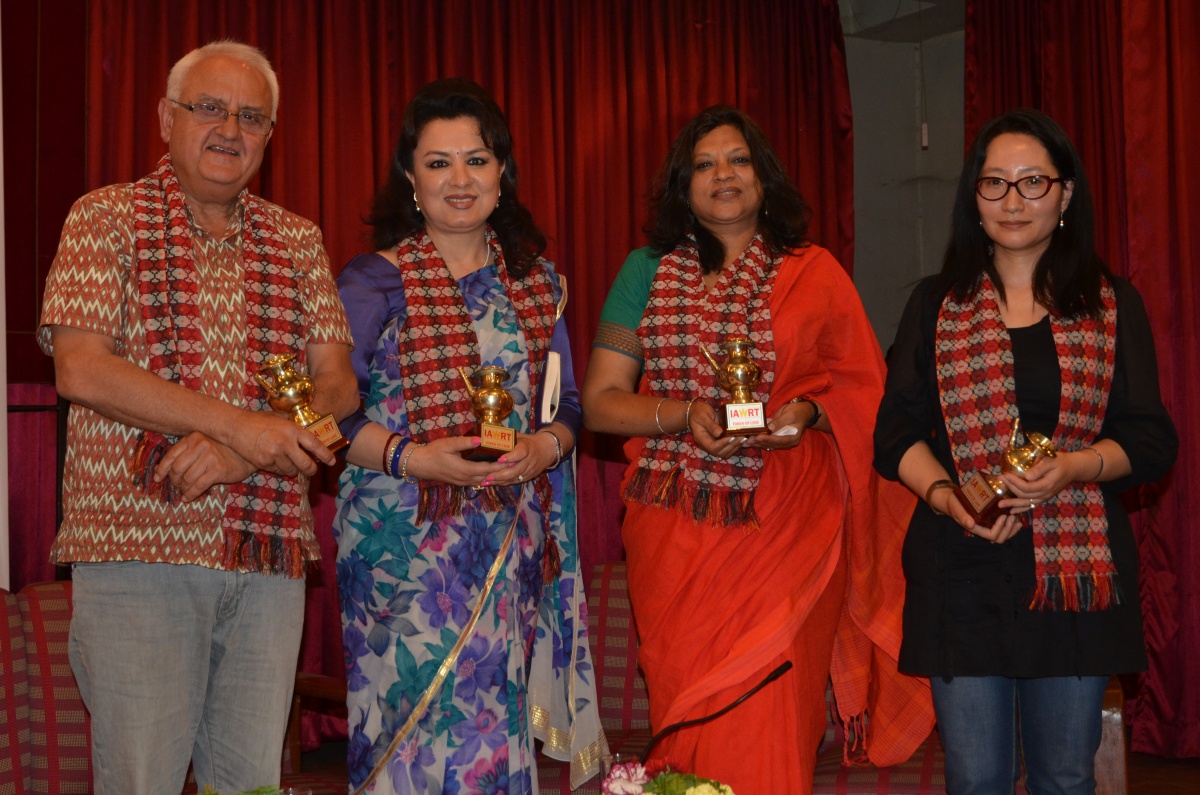 A panel discussion moderated by Pratibha Tuladhar explored the status of women in mainstream media. Bandana Rana recounted her experiences as a female journalist 20 years ago and highlighted the challenges that came with her profession. Emphasising the impact filmmaking can have on the mindset of people, she said, “Putting women’s voices in mainstream media was a challenge.”

Further, Archana Kapoor, IAWRT, India Chapter Head, talked about the misogyny that exists in social media, a platform reserved for free expression. She said, “We are still far away from gender equality but we as female professionals should not give up; it is the society that needs to change its perspective.”

When asked whether the Nepali media is misogynist, Kanak Mani Dixit, a senior journalist and  the founding editor of Himal Southasia, replied that it is, right now. Dixit focused on the lack of women journalists covering mainstream topics and suggested that the prime goal of the moment should be to increase the number of females in media. He said, “Female journalists need to be wary about editors who tend to limit females to a certain beat.”

The moderator also added that females are creating their own space for expression that is free of threats and limitations. The panellists agreed that such alternate media must be integrated with mainstream media.

A brief interaction with the director of Radio Melamchi 107.2 provided an opportunity to get up close with Rajeela Shrestha and hear the context of her work. Through her documentary, she shed light on the role of media in post-earthquake relief efforts. Shrestha shared that although she came across challenges, particularly as an aspiring female film maker; she did not get discouraged and faced it as part of her work.

Slider (Japan) directed by Maki Satake and Harikatha Prasanga (India) about an Indian Yakshagana actor and his decision to adopt a woman’s persona, were the other two films screened in this session.

The third session introduced the audience to Soundphiles, productions made up of sounds only. These audio pieces did not feature any visuals or images. Hum Tum Ek Kamre Mein Band Ho Aur by artists Agents of Ishq, Cinema Hall Mein Kuch Kuch Hota Hai by artists Tara Aliya Kesavan, Arnav Nanduri and Rohit Chauhan, and Bhoepae Antakshari by artists Reshma Pritam, Tenzin Kunchok were presented in this session. The audiences also interacted with the curator of Soundphiles, Samina Mishra. 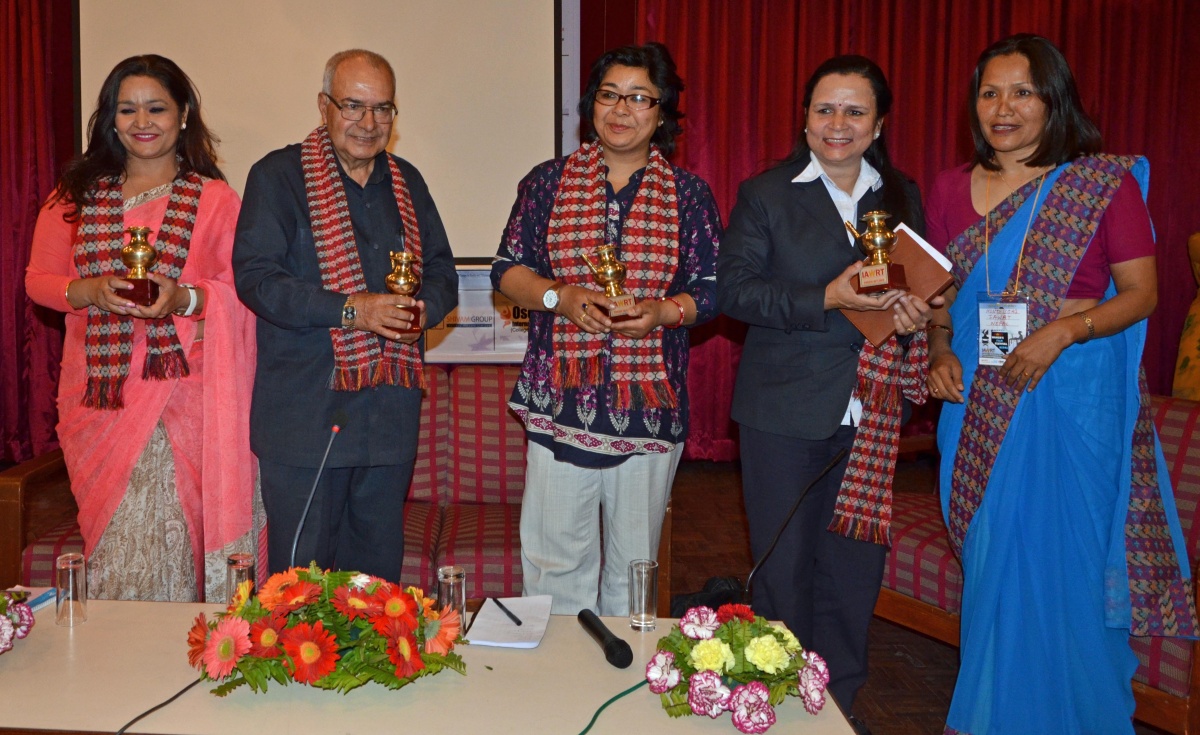 The fourth session witnessed a panel discussion on the film production scenario for women in Nepal,  moderated by Deepa Gautam. Suchitra Shrestha, Nepal’s first woman film director and the President of Nepal Film Directors, R.K. Regmi, journalist and Professor and Nirmala Sharma, the President of Sancharika Samuha (a forum of women communicators) were the panellists for this session. The concluding remark of this session was that movies in Nepal should come up with more women-centric roles.

The final section of the programme was an animated films screening. We make Images (India) directed by Nina Sabnani, Walking (China) by Yuxiao Yi, Pudavai (India) by Anitha Balachandran and Ulek Mayang (Malaysia) by Siti Hazar Aznan were presented to the audience. Nina Sabnani the curator of the animation package discussed the technique of these movies in the interaction session.

Lastly, Archana Kapoor thanked the organisers of the event and parted the stage with the hope that the IAWRT Nepal Chapter and IAWRT India Chapter will collaborate and organise more events in the future.The IAWRT India Chapter organises the Asian Women’s Film Festival, and this festival in Nepal featured selections from the new Delhi event. The traveling festival committee – Anjali Monteiro and Bina Paul – curated the Nepal festival.

Mallika Bhattarai, Festival Director, Nepal concluded the event after giving her vote of thanks to the organizing committee members, sponsors, esteemed guests from India, volunteers and everyone who graced the event with their presence.

The day’s full schedule is attached below.