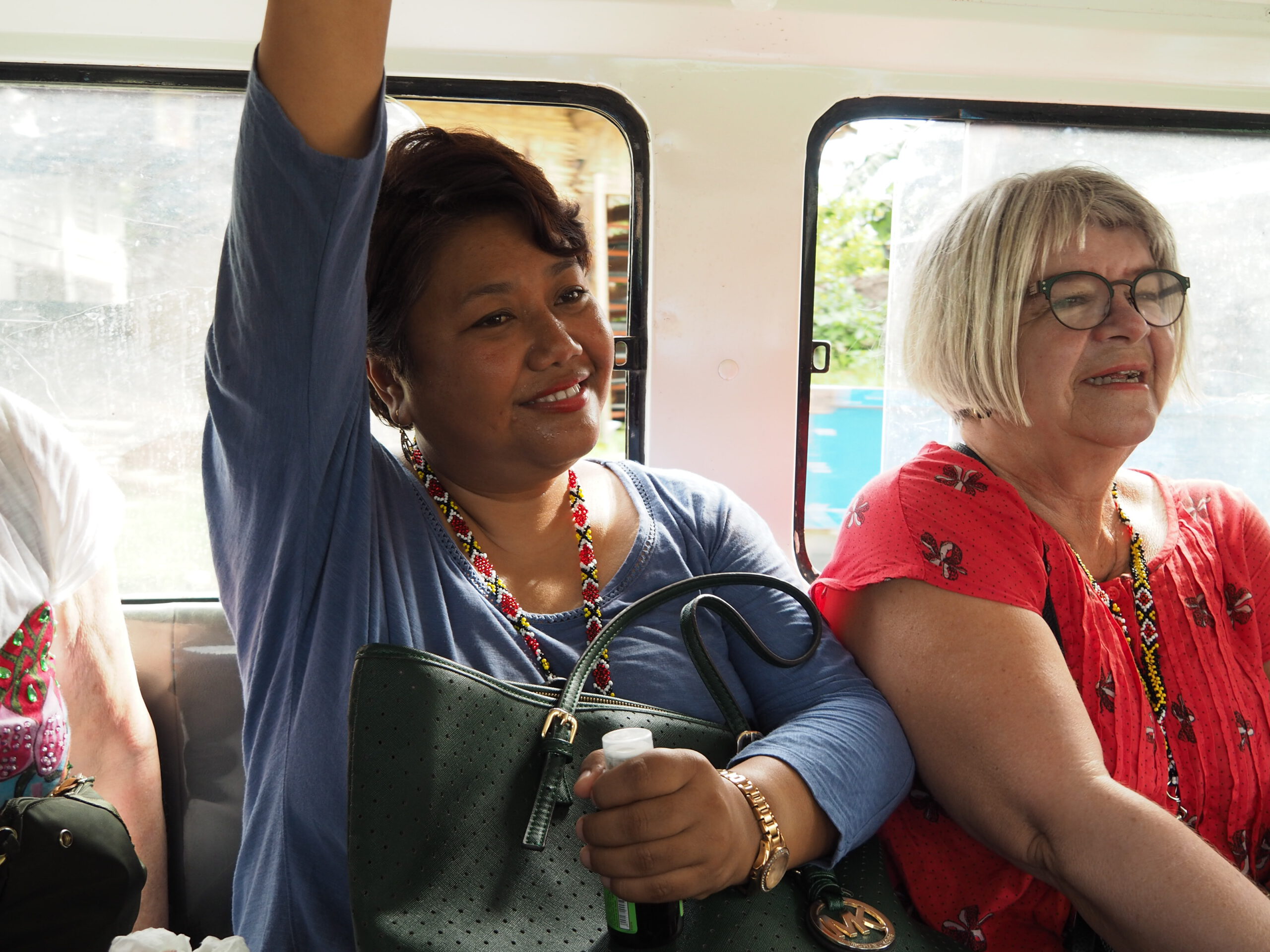 As members of the IAWRT board disembark from the ferry at Hagnaya Port in Cebu Province, Philippines, they longingly admire the light green ocean and white sand beach lined with palm trees which barely hide thatched-hut beach resorts. There is little evidence of the devastation of cyclone Haiyan (locally known as Yolanda) which hit this island hard and killed at least 6 thousand people across the Philippines, just four years ago.

These young palms on Bantayan Island also hide the story of the survivors relocated from this idyllic spot. 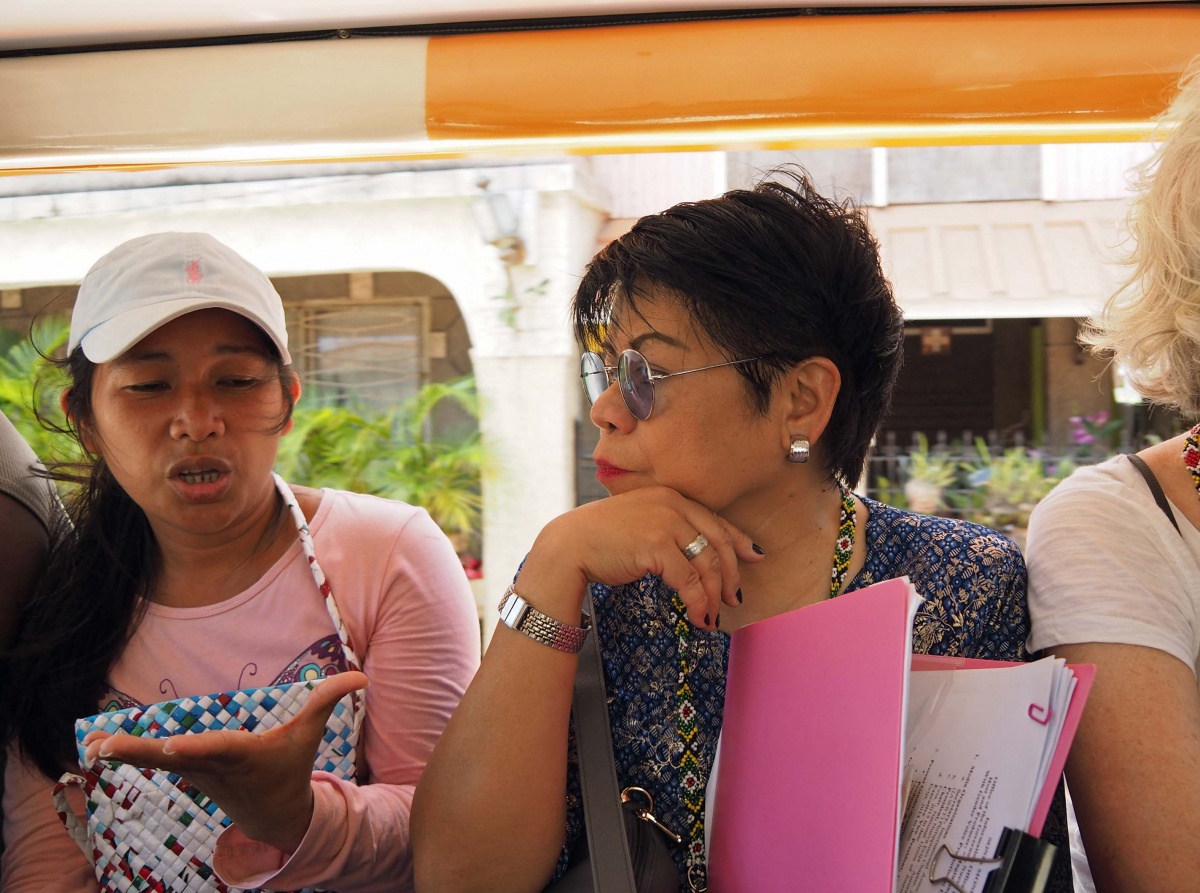 This is a story which veteran journalist and IAWRT Philippines member Sonia Capio and I partially extract from Jenalyn D. Santilalan, our Disaster Response Radio community link person who joins us in the tricycle-truck taking us inland. The land upon which those beach resorts sit used to house fisherfolk and their families. For their ‘safety’ and despite protests, they have been relocated to villages further inland. We are heading to one of these villages, where the people will do a narrowcast and we will share some of our media expertise with community radio volunteers from the Eastern and Central Visayas regions.

The rains have only recently stopped and there have been floods again, but there has not been any repeat of the torrential typhoon rains. We pass through the town and villages which Jenalyn tells us were flattened in the typhoon. The people of Bantayan Island waited ten days for any government help to arrive.

After an hour, the tricycle-truck driver refuses to take us any further on the ever-narrowing pothole filled road, so we walk the rest of the way through one village to Upper Patao. 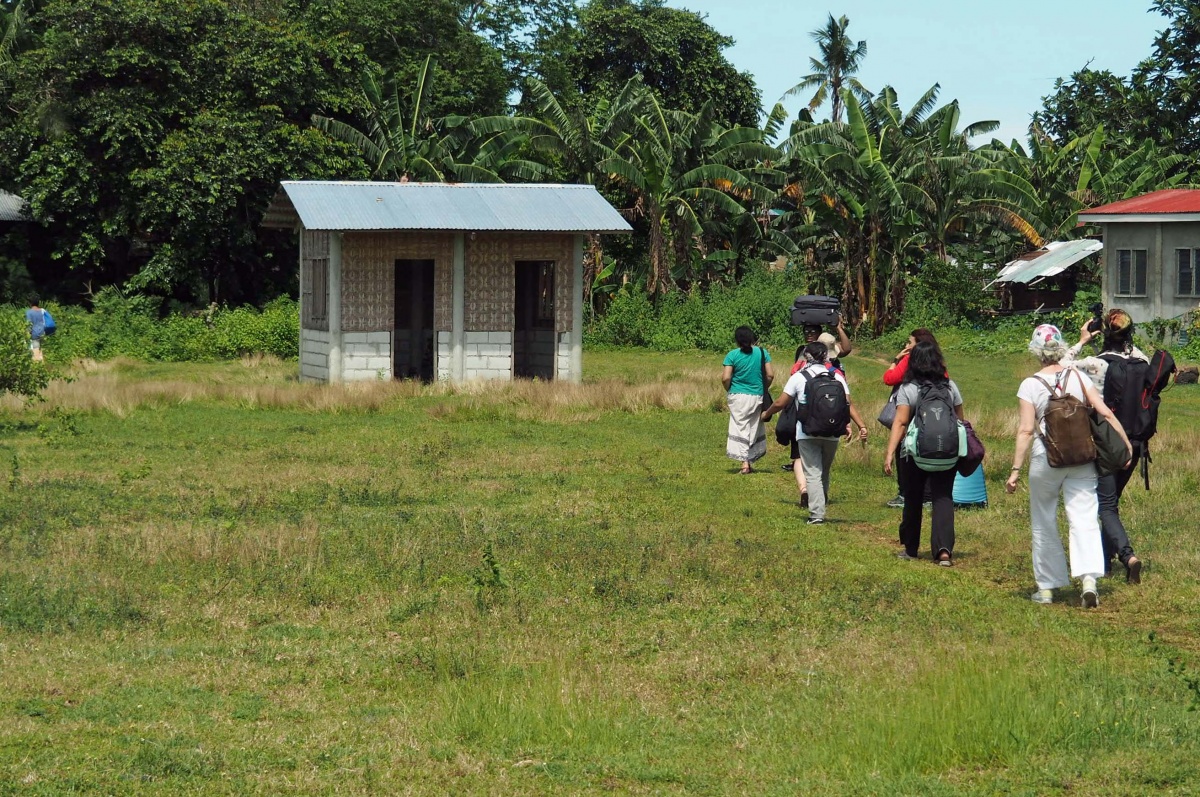 Here, in a tiny area between one-room houses built from a combination of stone, bricks, bamboo and corrugated iron, a green sheet adorned with spangled purple writing, says WELCOME VISITORS. The people, women, men and many curious children, greet us with necklaces which they have made from beach shells. Mine is mounted on cardboard recycled from a mosquito coil box. A dining table covered in floral plastic is about to be covered with a feast of local scallops, jellied seaweed, fish and rice.

Despite multiple language differences, including the local dialect, Cebu-anon (Sebuanon) which many of our Philippines link people don’t fully understand, it is clear that everyone is so pleased IAWRT International has come. They have put a significant effort into hosting us. I laugh when I see Angelmae, a tiny 18-month-old girl, taking scallops from her mother’s plate.She impatiently throws the shells on the ground when she can’t quickly extract the seafood, knowing she will be told-off by her mother, Benjie. Such things are universal. 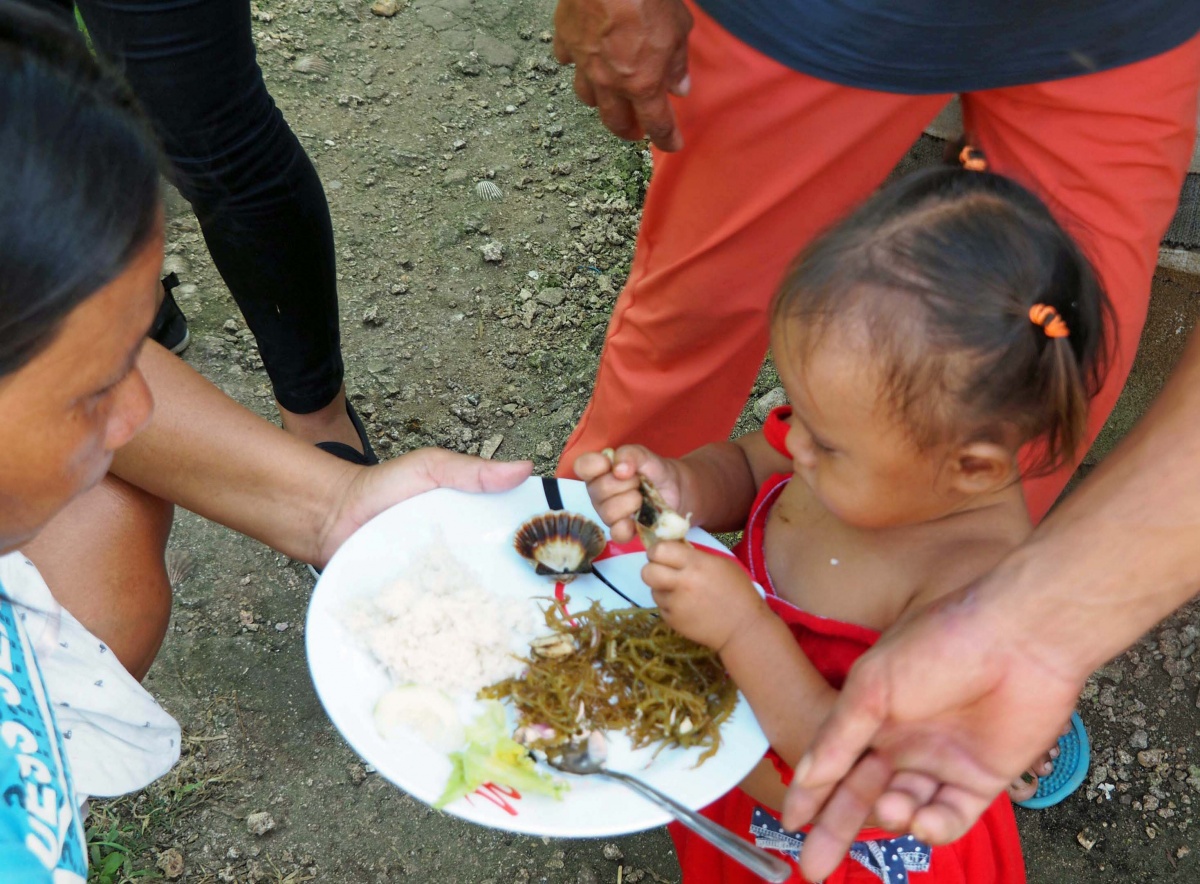 After lunch, we take a narrow walking path to the new, one room, day care centre/school newly build by a Philippines non-government organisation.  The lush area is overgrown with lantana, but young banana trees are finally almost ready to bear fruit. Taller palm trunks taper to remnant dead fronds, testament to the ferocity of the typhoon.

On the way I take the hand of a wizened lady in greeting. Ma Perla Mata is one of the trainee community radio volunteers. Later, in the narrowcast of Radyo Sugbanon (the chosen name means something like ‘our radio’ named in the expectation of receiving a transmitter) she says that she is a peasant finding it increasingly difficult to eke out a living because the sea water inundation has made her soil too salty.

The lack of roads to the relocated village is raised in that narrowcast by tricycle driver, Eddie Ferdanadez. He says after the people were forced to relocate, the promised aid money did not materialise to provide social services or basic roads. The screams of IAWRT treasurer Violet Gonda demonstrated the hazards first-hand, as an attempt to assist with her luggage almost went wrong and some men rushed to stop a small tricycle carrier from tipping over.

Without internet access, IAWRT IT training focused on basic principles of filmmaking and radio using smartphones, simple communications principles of journalism, ethics and gender sensitivity. Iphigenie Marcoux-Fortier takes a group to participate in making a film about the project. Quickly the young participants learn to direct the decisions about how they are to be portrayed. Training also focused on the privacy dangers and vulnerabilities of using Facebook, the Philippines’ most popular social media platform. All this was ably assisted by translation into Tagalog by Raymund B. Villanueva, the director of Kodao Productions, one of the partners in the community radio project which IAWRT supports. 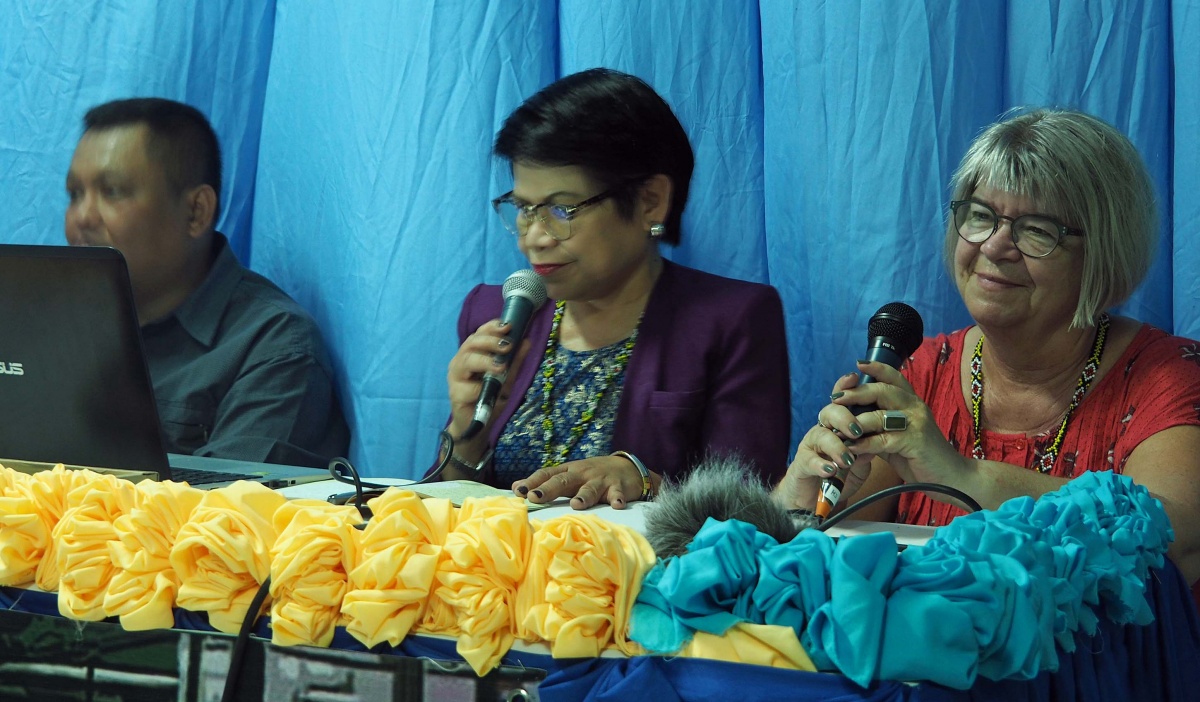 Raymund is a veteran press and broadcast journalist, a former economic reporter, who left the mainstream because he could not find “the grand notion of journalism”. We hear the translations liberally expanded with local examples, and good humor. “What we are trying to do here, as communicators and advocates of people’s communication rights is to look for something a little bit bigger” he says. “They should use these communication rights [as] a way for them to make it easier and faster for them to get out of poverty, to be involved in governance … so that whatever development project the government has it should look their way more often.”

Sometime translation is hardly necessary, when our star safety trainer, IAWRT board member, Abeer Saady warns participants about the emotional impact on the citizen journalist who may not be able to stop long to help a victim who may be a member of their local community. There was an emotional response to play acting by Abeer as a frantic mother and Violet the journalist, demonstrating the wrong (and cruel) way for a journalist to deal with victims, and the better way. The possible deaths of four children (which Abeer does not have) brought some close to tears.

Their faces showed genuine experience as she outlined the difficult choices they might have to make when they personally know victims. They brighten a little as she assures them that being a journalist is important work which is helping, by giving a voice to people affected by disaster, broadcasting their need for expert help. 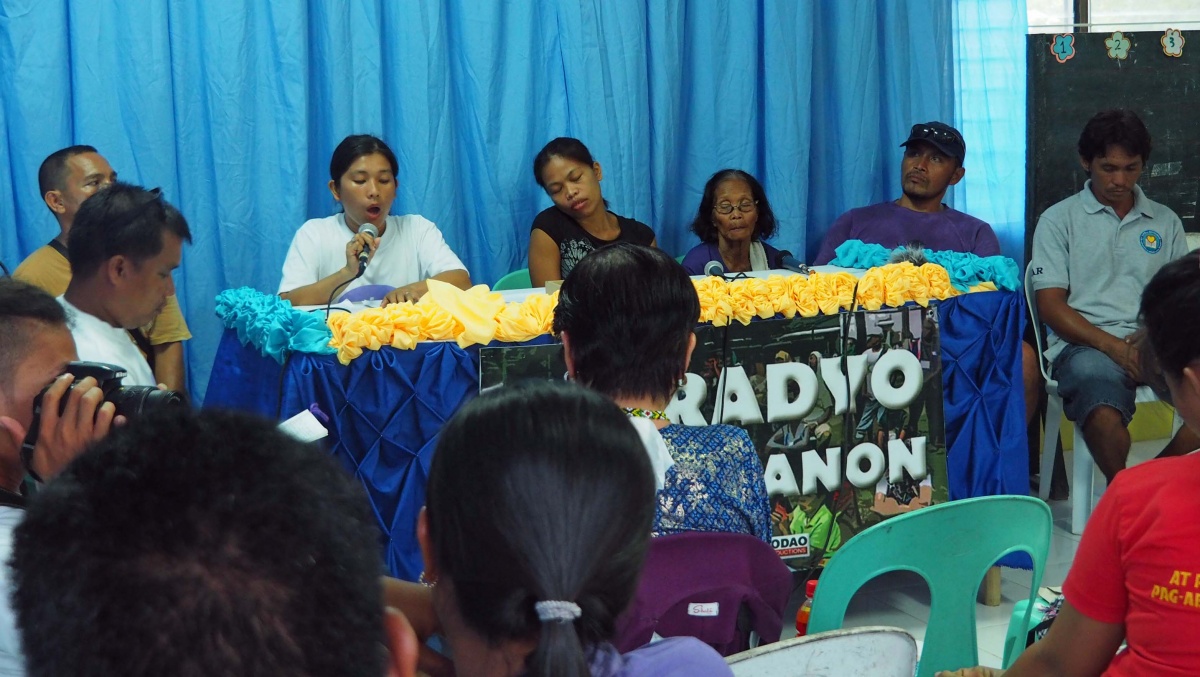 There is a similarly strong response when IAWRT President Gunilla Ivarsson, assisted by Sonia Capio, advises on simple rules about speaking for all by proactively ensuring women have their say. The audience response showed that female participants clearly had stories to tell and were determining to be heard. These are key messages for a community hoping to have a transmitter next year, which allows them to broadcast to the whole Island.

The afternoon training ends with two narrowcasts, the first in Tagalog anchored by the Radyo Tacloban volunteers, Jenalyn and Mariel V. Villamor.The second half-hour is hosted by Sonia and Raymond in English introducing IAWRT as an organisation to the community.

Earlier, the community leader Orly Golisao asks how the volunteers can gain more confidence in radio, but he does not hesitate, beginning with an appeal to the Philippines government not to deal with the lives of the people living on the shores of Bantayan Island – the poor who did not have the title to their land – in such a cavalier fashion. Under the anxious eye of chief trainer Jola Diones-Mamangun, Ma Perla Mata, Eddie Fernadez, and Henry Coyus speak about the post typhoon experience of their constituents. 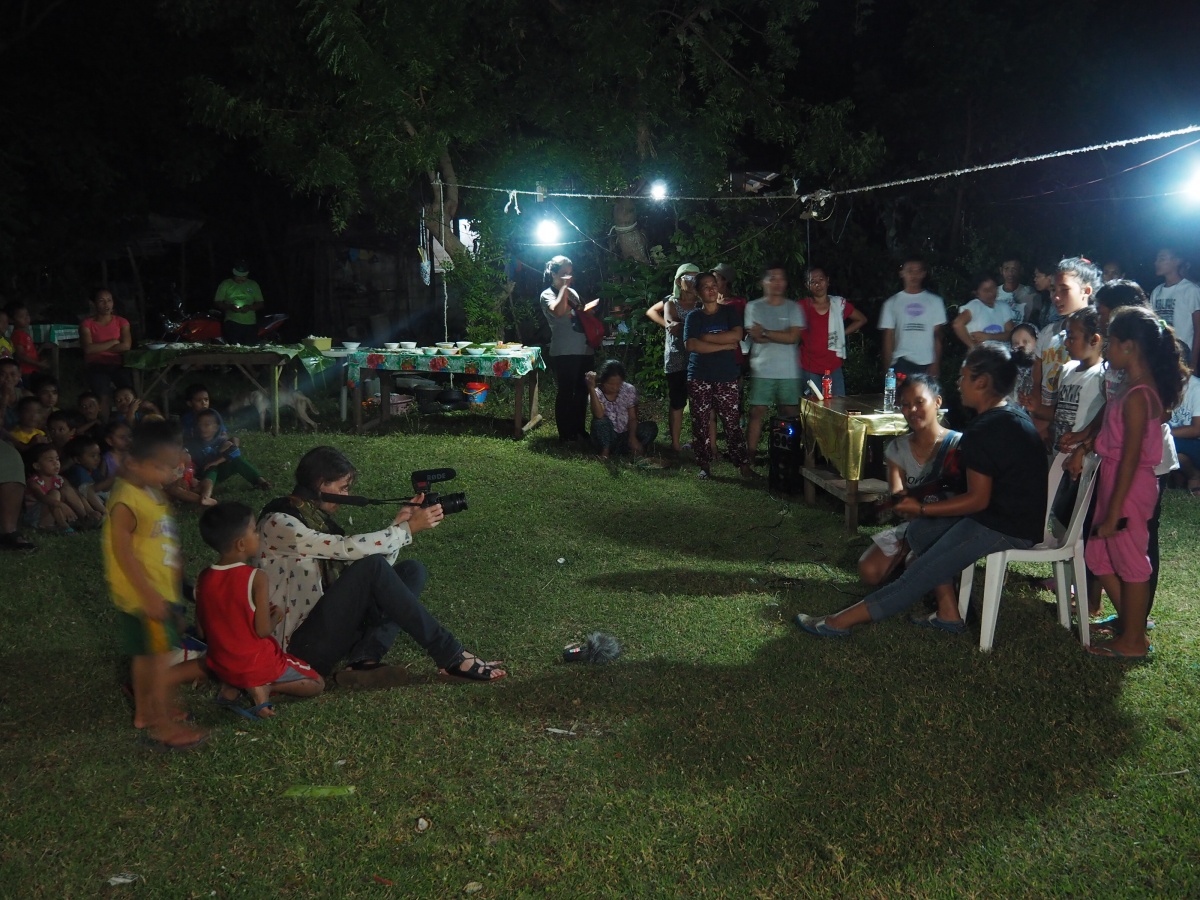 Much to the Board’s surprise the generosity of the Patao people had no bounds. We treck back to an open grassed area behind the village which is strung with lights. A new banner declares it is a solidarity night. It seems every woman, man and child is there. An enormous table is groaning with a communal feast of more delicious seafood and rice laid out on banana leaves. We are treated to a evening of singing and performances. In her final thankyou (salama) Gunilla tells them how the sharing of food and the workshops and community generosity would remain in her heart for a long time.

Two motorcycles light the way along the walking track and the people offer to carry our bags back to the road in the pitch-dark night. There is lightning in the sky but the few drops of rain on the humid night have not dampened the event.

Iphigenie’s filming has turned her into a child-magnet and she chats to a group surrounding her about her country, Canada – how cold it is now with the snow. It has rained and the holes in the tracks past the outer village have filled up, they skip nimbly, but I choose the wrong side and add a bit of slippery mud to my sandals.

Then as another small sprinkle of rain falls, they begin singing “rain, rain go away, come again another day” she asks if they don’t like rain, but they don’t answer and continue onto the next verse.

Photos by Nonee Walsh. Click to watch Iphigenie Marcoux-Fortier’s film about the encounter with the people of Patao