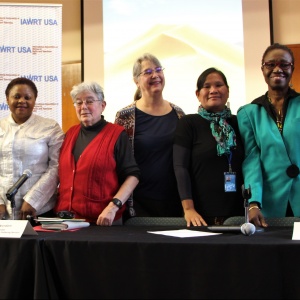 Everyone desires to belong, to have a family, an identity, and a culture to love and be loved back; that is what makes humanity meaningful. A lot of people work toward attaining a sense of belonging and that makes life a struggle worthy to take on. With hope, it becomes beautiful to work for your life goals among people you call your own, a community you share a culture with and neighbors you laugh and frown with and a geographical area you call your home identity. A world you are familiar with; a flock you call your own; the true meaning of life.
But when natural disasters hit… such is gone in a brief but harsh moment; identities wash away; neighborhoods disappear; ancestral graveyards are washed off and people die; bodies disappear in rubble; traditional sacred places vanish with the ruins; birds and animals helplessly die. Like one abandoned in the middle of nowhere. So many years and generational struggles gone, all that is left is a life with no history and a dark tomorrow. Offering survivors hope is the greatest package one could imagine, because it never goes, trauma never goes. But one just learns to live positively with it.

The International Association of Women in Radio and Television (IAWRT) sponsored a discussion on Community Media Models for Disaster Preparedness and Risk Management in New York and on international online platforms to complement the United Nations 63rd Commission on the Status of Women. The theme for CSW63 was: Social protection systems, access to public services and sustainable infrastructure for gender equality and the empowerment of women and girls. Moderated by Frieda Werden, from the Women’s International News Service, discussants with different disaster occurrence experiences and from different geographic location around the world shared and made recommendations on how community radio can help the community get access to social protection and survive times of disasters.

Jola Diones-Mamangun, (pic right) head of the Philippines IAWRT chapter, worked on establishing narrowcast radio in the aftermath of Typhoon Haiyan. The notorious typhoon was a devastating disaster for the Philippines that left survivors without hope, fearful of the unknown and anxious. “Over two thousand people are said to have died in the typhoon rampage that engulfed the country in 2018.” (Reuters)

Life after devastating disaster is empty, communities need to get together in one trusted voice to rebuild amidst anxiety and despair. Jola, under the IAWRT banner, formed narrowcast radio to mobilize affected communities, with the Disaster Preparedness Response Radio project which aimed to create a trusted arena to talk and to listen to each other about their shared experiences after the disaster; look at how best they could work together to live again and how they could minimize the disaster effect during subsequent disasters. Despite challenges, the narrowcast radio has slowly created positivity among typhoon survivors.

Olivia Tumanong, formerly of IAWRT Cameroon, shared her experience with the role of community radio in disaster prone areas drawing examples from her home country.  She says community radio is critical, immediately after a disaster, but after a short while they face stiff competition from commercial radio stations, making it hard to break-even financially and they are forced to close. This leaves communities helpless since they end up having no direct control over so-called community radio and have no stake in the content aired.

This article’s author, Nankwanga Eunice Kasirye, from the Uganda chapter of IAWRT (pc left wth Kanya IAWRT head Josephne Karani) shared the need to revive traditional media communications among communities for mobilization, since modern media outlets are abused by opportunists. Communities do not trust modern media because of the contradictions in their coverage. Traditional media, such as drumming, would easily speak to people and earn their trust in times of emergency.

Panelists also included Susan Raybuck of KWVH-LP/94.1 FM Wimberley Valley Radio, Texas. Like the Philippines situation, this low-powered radio was set up in the aftermath of a national disaster. The 2015 Memorial Day weekend floods destroyed over 400 homes, damaged hundreds more and killed eight people in a major flooding disaster which spanned multiple counties.

Californa is alos disaster prone, “We’ve had two major emergencies in the past 18 months. People sleeping on the beach, air thick and grey – the bushfires burnt out cell towers, the internet, and phone. It was huge, huge, huge…” These are the words of panelist Peggy Berryhill of California in a video presentation about the Santa Rosa fires in California. Mainstream media was giving misinformation she said. It was the radio she founded that gave people the information they needed to stay safe. Peggy is a Native American who founded The Native American Media Resource Center. She is a Muscogee Tribal member and an award-winning radio producer.

Sheila Katzman of IAWRT-USA explains that the CSW Commission compromises 40 UN Member States who examine the CSW theme. She challenged the audience about their individual understanding of social protection floors in line with community disaster preparedness. Social protection floors are the basic set of social rights derived from human rights treaties, including access to health, education, housing, water and sanitation (Editor).

Among audience responses was the need to prepare communities before disasters hit. Communities need to be educated in preparedness and not just concentrating on disaster after-effects. If communities are prepared in advance, they will be able to control the impact and the ability to rebuild lives afterwards.

Violet Gonda, of Zimbabwe and President of IAWRT, highlighted the Philippines Disaster Preparedness Response Radio model as an IAWRT initiative to empower communities to participate in carving out their own interpretation of pressing problems at the time, to create their own medium of communication, and discuss possible solutions together for a way forward. Violet encouraged the audience to make use of IAWRT expertise, including a booklet on the Philippines Radio Experience for empowering their communities to build their own medium of communications to shield themselves from the adverse effects of disasters.

The IAWRT parallel event, Community Media Models for Disaster Preparedness and Risk Assessment was the right thing to do at CSW63. Some 56 people attended the event which was a quality discourse where intellect meets grassroots on the same playing field, with common interest goals in mind.

Only days after the event, a devastating cyclone destroyed entire villages in Southern Africa: Mozambique, Zimbabwe and Mali. We are already thinking how narrowcasting can help ease the trauma for those people.