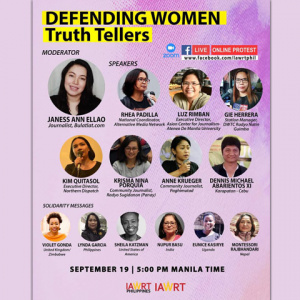 IAWRT Philippines is holding an online protest to call attention on the cases of Philippine women journalists, also IAWRT members, who were either jailed, charged, harassed or missing. Some of them will share their situation in the protest.

Among the speakers is Krisma Nina Porquia, community broadcaster for Radyo Sugidanon. She was arrested, detained and charged while covering a peaceful protest on May 1 condemning the killing of Jory Porquia, her father, a well-known activist, environmentalist and relief volunteer in Iloilo City. She was released, along with other journalists who were also arrested. All the protesters were arrested and also released after posting bail.

Human rights group Karapatan Cebu will speak on the community radio broadcaster Elena Tijamo who continues to be missing to this day.  Elena “Lina” Tijamo, 58, was forcibly taken from her home in Barangay Kampingganon, Bantayan, Cebu in the evening of June 13. Suspected Armed Forces of the Philippines (AFP) elements—four armed masked men in civilian clothes accompanied by two women—held back family members while they covered Tijamo’s mouth with tape, tied her hands, and took her away. The lockdown in the country, specifically the extension/re-imposition of the lockdown in Cebu, prevented her family and groups to be able to look for her right away. Tijamo was able to make calls to her family only to tell them to take down posts about her abduction or else her captors said they would not release her.

Kim Quitasol, journalist of Baguio-based community paper NORDIS, and Gie Herrera, station manager of Radyo Natin Guimba, would share the origins and updates of separate libel cases filed against their media outfits during the pandemic and lockdown in the country.

Anne Krueger, a community journalist from Bacolod-based publication Panghimutad, was arrested along with 60 others in simultaneous office raids on progressive groups and independent media offices that police said yielded guns and explosives on October 31, 2019. Human rights groups and counsels for accused said the evidence were planted. Krueger was detained and charged and was only released after posting bail.

Counsel for Frenchie Mae Cumpio, executive director of Tacloban-based community publication Eastern Vista, is sought to share updates on Cumpio’s case. Cumpio was arrested on February this year, in a similar fashion as Krueger – a search warrant for their office served in a raid conducted in the wee hours of the day and the raid yielding “planted evidence.” Unlike Krueger, Cumpio was not allowed to post bail and continues to be incarcerated to this day.

Veteran journalist Luz Rimban will discuss the state of press freedom in the Philippines.

Rhea Padilla will share a message from Altermidya, the network of alternative media outfits in the Philippines.

IAWRT Philippines chapter President Lynda Garcia said the event is “timely and needed” as harassment against journalists did not abate pre-COVID-19 lockdown up to present.

To join, you may register here: