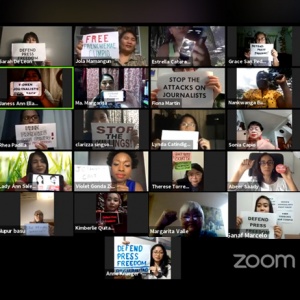 A call to stop the attacks against media

We view with deepening concern the state of press freedom in our country.

Media died on September 23, 1972, the day President Marcos aired a declaration of Martial Law [SG1] throughout the nation. (The deed already done, Proclamation 1081 was signed on September 21, 1972.) Except for a crony press, all media were shut down and hundreds of journalists tagged as “subversives” were thrown into prison caused by the suspension of the writ of habeas corpus during that period.

Fast forward to today, almost forty-eight years later, and amid the pandemic, the dark times of Philippine history are repeating itself. The use of draconian or militarist measures to muzzle freedom of expression in the country, the recent signing of the Anti-Terror Law and its chilling effect on media are no stranger to Filipinos, especially those who have experienced the horrors of Martial Law in 1972.

There is no let-up in maliciously tagging critical media as “terrorist” or supporting terrorism. Even before this, summary extrajudicial killings have hit journalists hard.

Fourteen journalists have already been killed. Many more are red-tagged, harassed, and put under surveillance. Even the National Union of Journalists in the Philippines (NUJP) has been called a “communist front.” A renewal of the franchise of media giant ABS-CBN was turned down and thousands of employees lost their jobs. Rappler and Philippine Daily Inquirer have been slapped with charges of libel and tax evasion. Alternative media outfits like Bulatlat, Kodao, Pinoy Weekly, AlterMidya and Northern Dispatch have been cyberattacked.

Our women colleagues in media have not been spared. The prevailing misogyny enabled by leaders in the country, put the women in media in the line of fire.

IAWRT Philippines’ very own members, Frenchie Mae Cumpio and Elena Tijamo, were targets of attacks. For exposing military abuses against farmers in their region, Frenchie of Radyo Tacloban was arrested and charged with illegal possession of firearms. Elena of Radyo Sugbuanon was abducted by suspected military agents in her home and is still missing up to this day.

Other names, and mostly community journalists, that were either arrested, harassed or subjected to fabricated charges included Anne Krueger of Pahimutad, Kim Quitasol of Nordis, Gie Herrera of Radyo Natin-Guimba, and Chinkay Porquia of Radyo Sugidanon.

The Anti-Terror Law is a threat to democracy and must be scrapped. The Constitution of the Philippines has been explicit that no law shall be passed abridging the human rights of every Filipino including their freedom of expression

The escalation of human rights violations, including the muzzling of the press, has no place in our society especially in this time of the pandemic. So many dreadful things are happening in the country today such as increasing state violence and the plunder of public funds that only a free press can uncover and keep our people duly informed.

In this light, we call on our members to up their vigilance, call on the government to stop the attacks against journalists and other persons, and release all political prisoners, including journalists. No matter the obstacles, we must continue to keep the fire of press freedom burning in our hearts and soul. Never again shall we allow the abuses that happened during Martial Law happen. Never shall we forget.