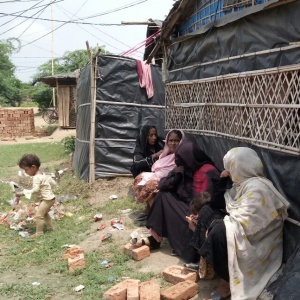 Myanmar’s neighbourins are left struggliing with hundreds of thousands of Rohingya refugees. Now they could be forced to go home.

India has a large population of Rohingya refugees spread all across the country in search of basic amenities. While Bangladesh receives the largest number, estimated to be 655,000 to 700,000, while India is trying has not less than 40,000 Rohingya refugees, to deal with.

The reality of what these numbers can mean is starkly presented to me a few kilometers before the city of Nuh in north-west India. There is an open field right behind the Mewat Development Area Transit Hostel, and a few tents, occupied by Rohingya refugees. The tents, with black tarpaulin roofs and walls, stand on makeshift frames of bamboo and wood; there is no permanency in these houses. Their tenements serve as a bitter analogy for the circumstances that the ethnic group finds itself in: forced to leave their homeland in Myanmar.

Nuh, the city and the district, was earlier called Mewat—the home of the Meo Muslims, (Meo – also called Mewati – is a Muslim community from North-Western India, in Rajasthan.

The Rohingya people came to Nuh as early as 2012, when it was still called Mewat, in the hope of finding a home amidst a community of fellow Muslims. They set up their houses on this land, which was given to them by members of the community. However, now they are now to be ousted from India.

Generation after generation of Rohingyas have been subject to subject to restrictions on movement and everyday life by successive governments in Myanmar – the community has been living in inhumane conditions, “To get married we had to take permission and bribe the administration. To get birth certificates too, we have to offer a bribe. We had land and [now] we have no right to it,” said Abdul, a middle-aged Rohingya refugee putting up in Nuh.

In an attempt to escape the barbaric conditions of their homeland, thousands of Rohingya Muslims cross the border every day and find their way to different refugee camps mainly in Bangladesh’s Cox Bazaar.

Many of them lose their lives in the process. Now reports are emerging that the Myanmar Army is laying landmines along the border with Bangladesh to maim, kill or deter the fleeing Rohingyas.

Violence is not new to the Rohingyas, but this time the retaliation by the military was on a huge scale. Several villages were set ablaze and, according to reports, thousands of people are left stranded in mountainous regions without food or water. Recently an exclusive investigation by the Associated Press news agency reported that many Rohingya villagers in Myanmar were massacred and buried in five mass graves.

With an initial hesitation, a couple of women also came up to speak. “I came here with my entire family, there were 10 of us. We landed up in Bangladesh but it was overpopulated so we decided to come here in India. We went to Jammu first and then came to Mewat,” said Shophika, a mother of three. Many like her have found their way to Mewat, looking for a better place, and currently, there are 327 families who live in six settlements in Nuh. “We travelled not knowing anything about India, only in search of acceptance, peace, and shelter,” she continued.

Many have braved much adversity to find refuge in India. They crossed borders by bribing officials and travelled on foot through heat, rain, and cold. “.. But now we hear that 40,000 Rohingyas should be thrown out,” said Ali Johar.

The bulk of Rohingyas have found their way to different refugee camps in Bangladesh’s Cox Bazaar. Thousands of Rohingya women of and children fear for their safety. There are no authorities to reach for official guidance and support.

Findings of a joint nutrition assessment conducted in October shows that, ‘over 3/4 of the surveyed population relies on food security coping strategies, including opting for less preferred and less expensive foods (90%), reducing number of meals eaten in a day (69%), and restricting consumption by adults in order for small children to eat (68%).’ Nearly one-third of families surveyed reported open defecation due to a lack of sanitation facilities, and the cleanliness of public latrines. where available, was one major concern.

Children are living in filthy conditions with barely enough food, clean water, and healthcare. There are acute malnutrition rates among child refugees under five, Many are underweight and suffering from anemia. And there is a high risk of diarrhea, dysentery, measles, respiratory infections and an expected rise in children suffering from mental health issues.

Many young Rohingya girls are being forced to marry simply to secure more food for themselves and their families. Drawing global attention to the Rohingya refugee children in Bangladesh, goodwill ambassador of the United Nations High Commissioner for Refugees (UNHCR), actress and philanthropist, Kristin Davis said, “This is currently the fastest growing refugee crisis in the world and seeing the impact of this emergency on children is devastating.”

Back in North-west India , a middle aged  refugee ,Ali Johar tells me “We came here with the idea of living. In Rakhine, we were told that even animals are treated with dignity in India.” In the areas around Nuh, the Rohingya people do not have access to electricity, potable water or even sanitation, but this life, according to him, is more dignified than what they would have anywhere else.  For general health services, there is one primary health care at Nuh but for major illnesses and maternal health services, most of the people go to a Medical college hospital at Nalhad, which is 4 km away, while mostly the Rohingyas here opt for home delivery. “We are often made to wait aside for treatment but still we get it even if it is after the locals. In Myanmar we are left to die,” says Sader Khan.

In fact, in India, Rohingyas are treated as second-class refugees, they are constantly pushed to the margins and denied basic human rights. Johar said, “We have to live by a code. In July 2013, six girls got married to local people here. Following which we were called to the SP office and they asked us to stop getting Rohingya women married to the locals and asked for the number of women we had married to the Meos. There is a list of conditions that we have to abide by, at least 16-17 of them. It is written in English, Urdu, Rohingya language. We were made to sign that before getting our refugee cards.”

“A few of us had Aadhar (12-digit unique identity number issued to all Indian residents based on their biometric and demographic data) but we were asked to return them… Due to lack of certified identification, our children are not registered in schools. Their future worries me a lot,” said Ali Johar.

The lack of documents and the lack of safeguards has left them at the mercy of the local community. However, in the face of the threat of deportation, these are secondary concerns.

Sanjoy Hazarika, director of the Commonwealth Human Rights Initiative, says the government is entitled to take decisions. “But now, it’s a question of humanity. However, if they are being deported then the point is, where will they be deported to? Myanmar does not recognise them, and they are certainly not from Bangladesh, Nepal or Pakistan. Also, there is a belief that these people are a threat but most of them are simple refugees. If the government has any specific knowledge of any particular threat, then it should clarify.”

Many reasons are being attributed to the government of India’s sudden aggressive pro-deportation stand on the Rohingyas. Some government officials have expressed concerns about violent extremism which has lead to greater community fears around this particular community alleged connections to terror groups. International communities have condemned the sudden decision of the Indian Government.

On September 5, 2017, Prime Minister Narendra Modi undertook his maiden trip to Myanmar. India is urgently trying to counter Chinese influence in the region, and not opposing the recent spate of violence against Rohingya Muslims might help Modi earn brownie points, which could translate into clinching major infrastructure projects in Myanmar. China too has remained silent on the issue, . While this is at best speculation, the timing of the crackdown is suspicious.

Even though in early January 2018, Bangladesh and Myanmar have agreed to complete within two years the return of hundreds of thousands of Rohingya Muslims who fled an army crackdown last year in Myanmar, fear does not seem to fade. Statements from the Myanmar and Bangladesh foreign minister said Bangladesh would set up five transit camps on its side of the border. Those camps would send Rohingyas to two reception centres in Myanmar. The repatriation process did not start even after a month of the agreement.

The Bangladesh statement said: “Myanmar has reiterated its commitment to stop (the) outflow of Myanmar residents to Bangladesh.”

Before we were about to leave Nuh, with a helpless and trembling voice, Ali Johar said, “It is not easy to get jobs as we don’t have aadhaar cards. We try to get daily wage work. It is also not possible to stay away from the family because there is also a constant fear and insecurity. There is no peace of mind.”

This article was adapted from an article published by the Hardnews Magazine, Delhi.