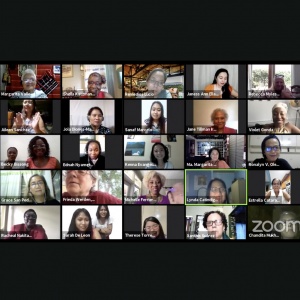 Discussion on current situation, challenges, and the future after the pandemic

On July 22, IAWRT USA and IAWRT Philippines held the first webinar in a series of IAWRT chapter-to-chapter meetings. The topic is “COVID19: The Dilemma for Women, Journalists, and You.”

While it was a joint webinar by two chapters, members from the other 12 chapters of IAWRT as well as international members and the International Board joined the webinar.

During the COVID-19 pandemic, journalists find themselves working in more hostile environments with cyber-attacks, threats, arrests and kidnapping.

·    In the Philippines, we see a rise of cases of media repressions, with the kidnapping of Filipino journalist Elena Tijamo whose whereabouts is still unknown; the continuing detention of community radio journalist Frenchie Mae Cumpio, the conviction of Maria Ressa and former journalist Reynaldo Santos Jr.; shutting down of media giant ABS-CBN, vilification campaign against journalists and media outfits that are critical in their reporting, to name a few.

·    In the US, media houses like the New York Times, the Washington Post, CNN, and numerous journalists, have been publicly vilified as “fake news” since 2016. The most derogatory names, too, are assigned to journalists, particularly female journalists for doing their job.

This webinar event discussed the chapters’ current situation, challenges, and the future after the pandemic.