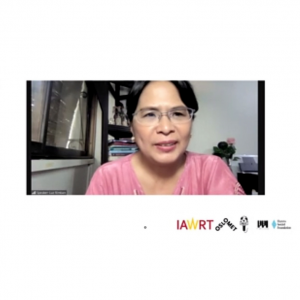 First in a series on the Roundtable discussion organized by IAWRT Philippines, OsloMet Journalism and Media International Center, in partnership with the Philippine Press Institute and Hanns Seidel Foundation.

Luz Rimban, executive director of the Asian Center for Journalism (ACFJ) at the Ateneo de Manila University, tackled dealing with disinformation and propaganda during the elections in the roundtable discussion and forum, “Halalan 2022: Ready na ba ang kababaihan sa media?” [Elections 2022; Are women in media ready?] on October 9, 2021.

Women journalists and female journalism/communication teachers and students participated in this online event organized by the International Association of Women in Radio and Television (IAWRT) Philippines and Oslo Metropolitan University (OsloMet) Journalism and Media International Center (JMIC) in partnership with the Philippine Press Institute (PPI) and Hanns Seidel Foundation (HSF).

Rimban started the discussion with reflections on the 2022 elections and what is at stake. She underlined the possible return to Malacañang of the family of the late dictator Ferdinand Marcos, as well as the continuous hold on power of President Rodrigo Duterte and his family, whose reasons to remain in power include the official probe of the International Criminal Court (ICC) into alleged crimes against humanity in Duterte’s “war on drugs.”

At the same time, she noted that there are “pro-democracy, freedom-loving Filipinos” who “know that Marcos and Duterte represent the darkest times of the country” and “don’t want a repeat of martial law or a repeat of the past six years.”

Given this context, Rimban noted, “In a race as tight as the one we are having in 2022, we can expect that disinformation and propaganda will go into overdrive.”

Injecting disinformation and propaganda into social media content may be done “subtly” or “covertly” by candidates, their campaigns, and their supporters. While those who have money can spread these on a larger scale, everyone can engage in disinformation and propaganda, which is why journalists and the public must remain vigilant, said Rimban. She acknowledged that because there are no gatekeepers on social media, it has become more difficult for citizens to distinguish between true and false information.

As these types of content continue to surface on social media, Rimban encouraged introspection on how to view and respond to disinformation and propaganda. Acknowledging the power of certain politicians as “masters of disinformation” and the fact that there are “bloggers, influencers, and vloggers who are looking for content,” she invited the participants to look at such content more critically rather than “pick a fight” with content producers.

This is also what Rimban underlined during the roundtable discussion, when asked about the issue of “he said, she said” reporting during the elections. She noted that while “there’s a place for breaking news,” it is “also incumbent upon journalists to… take a step back and look at the bigger picture.”

Rimban shared the following ways to deal with disinformation, in particular:

Rimban said doing quality journalism requires knowing how to fact-check and continuously learning about election laws, voting procedures, and related facts and historical information. She also advised sharing fact-check findings and correcting false information within one’s own circles such as in chat groups, as well as promoting how to think critically especially during the elections.

She added that media/social media literacy and fact-checking initiatives must be strengthened, as these are often done in schools and journalists’ circles while other stakeholders are often overlooked. She shared that when ACFJ shared tips with an urban poor community on how to spot falsehoods, the participants were “so excited because nobody had taught it to them before” and were “very keen on getting more information.”

This is a strong reminder for journalists and other stakeholders to expand discussions and engagement on how to deal with disinformation and propaganda.