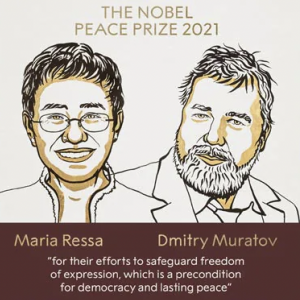 Fellow journalists and press freedom and freedom of expression and information take the spotlight at this year’s Nobel Peace Prize.

The Nobel committee awarded this prestigious peace prize to journalists from the Philippines and Russia for their ‘efforts to safeguard freedom of expression’. This, the Norwegian Nobel Committee also deems, is a precondition for democracy and lasting peace.

“Free, independent and fact-based journalism serves to protect against abuse of power, lies and war propaganda,” said Berit Reiss-Andersen, chair of the committee.

The award is accompanied by a gold medal and 10 million Swedish kronor (US $1.14 million)

The recognition comes at a time when journalists are increasingly at risk the world over, especially female journalists in Afghanistan and many other hot spots.

Co-founder of Rappler, a digital media company for investigative journalism, Maria Ressa uses freedom of expression to expose growing authoritarianism in the Philippines.

Dmitry Muratov, on the other hand, is a Russian journalist who founded the Novaya Gazeta, a news agency that is critical in its reporting and has served as its editor-in-chief since 1995.

IAWRT hopes this award becomes an opportunity for fellow press freedom advocates to hold the line and engage governments to protect a free press and to uphold people’s right to know.