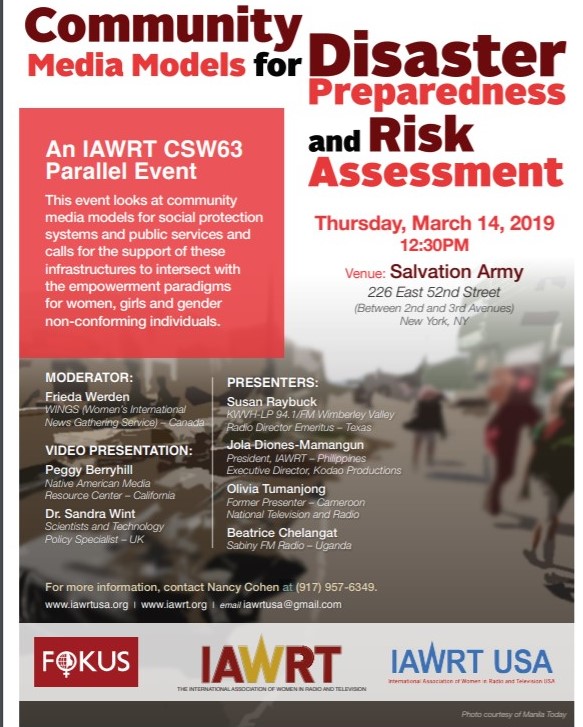 Over 50 people attended a panel discussion – Community Media Models for Disaster Preparedness and Risk Assessment – ­ on March 14, 2019 – a parallel event organized by the IAWRT- USA chapter and held during the Commission on the Status of Women at the United Nations.

The event occurred as a dozen US states in the northwest experienced flooding destroying infrastructure and farm land, Cyclone Idai pummeled the southwestern African countries of Malawi, Mozambique, and Zimbabwe leaving hundreds dead and a humanitarian disaster in its wake, and flash floods hit Thailand. 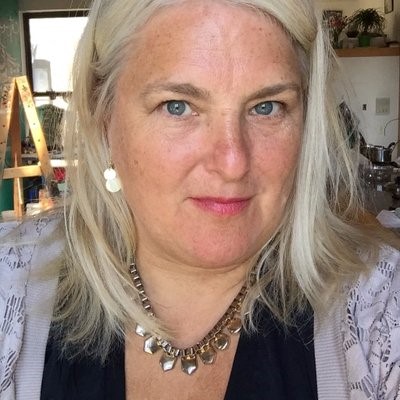 The panel discussion focused on how community media could take a role during the time of climate change disasters and if it could, what form would it take and what would be needed. 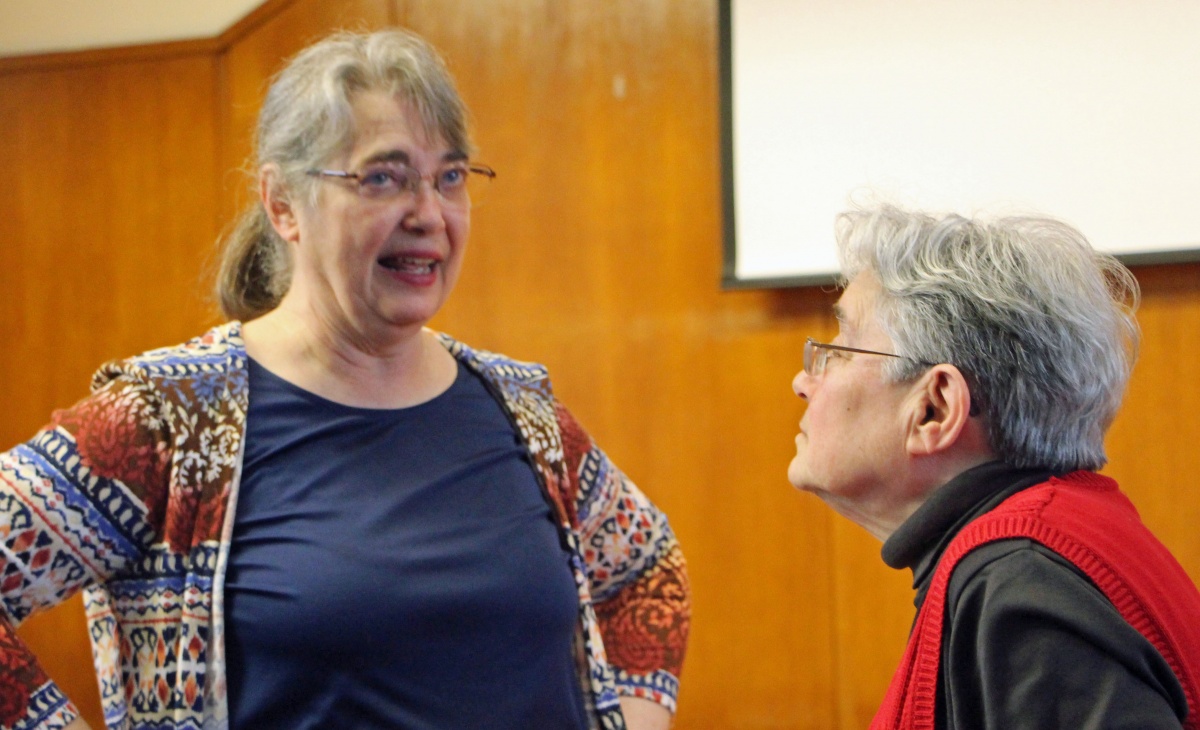 Frieda Werden, founder of Women’s International News Gathering Service (WINGS) and a member of the IAWRT-USA chapter, moderated the panel. She said in a climate disaster “you need to be able to communicate and to communicate your needs,” when introducing the first speaker, Susan Raybuck of KWVH 94.1/FM Wimberley Valley, Texas. She was granted a license by the Federal Communications Commission to broadcast during a climate emergency on a low powered FM radio. (pic Susan & Freida)

“I live in an area where there is a lot of drought, wild fires and flooding,” Susan said and explained her frustration not knowing what was happening in 2011 when 430 wild fires broke out in Wimberley and her weekly newspaper was behind a paywall and there was no information on the internet.

Four years later Wimberley Valley had its worst flood in recorded history when waters reached 43 feet high, swept away a major bridge and destroyed 400 homes, displacing hundreds of people. She went on Facebook to start sharing information about the disaster until the internet went out, and access to other media was either unavailable or spotty. She decided radio was something they had to have. Through the help of Austin Airwaves, a group run by Jim Ellinger, who sets up radios all over the world in countries like Cameroon, she was eventually able to set up a low powered FM radio station. 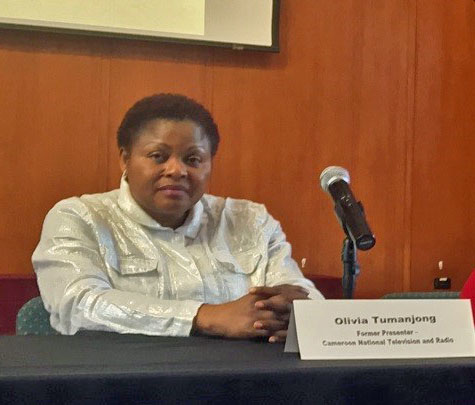 Olivia Tumanjong is a former presenter on Cameroon National Radio and Television and is now a member of the US chapter.She said community radio in Cameroon started by UN Women creating radio stations in early 2000. Radio stations were set up by UNESCO in rural communities for women, which sent out message about women for women and by women; at the height of the program there were somewhere between 100-200 stations. The stations worked for a long time before the media landscape changed and opened up to private media – before that only there was state owned media. Many of the UNESCO radio stations lacked funds and had to seek corporate funding becoming commercialized, and often gave out information that benefited funders rather than public.

Tumanjong said the country suffers from landslides, the disruption of Mount Cameroon and also conflict situations.

“We don’t have those early warning stations to warn the people, to warn them what is about to happen and what they should do to stay safe,” said Olivia Tumanjong.

Olivia described how in September/October 2018 community radio functioned in an unorthodox, political way, during the conflict between Cameroon’s English speaking and French speaking parts of the country. She said the people were cut off from communication, little was coming from the mainstream media leaving them to depend on local community radio stations. She said a divisional officer put out an announcement asking people of 26 communities in the English speaking part of Cameroon to move out of their villages because the government was going to clamp down on them, causing a massive refugee movement of people, around 10,000 to head to Nigeria for refuge.

“Imagine if this information was geared to informing the people about an impending disaster, that these radio stations were owned and managed by the people so they could decide on the content for their development and protection; general information is supposed to help them as a community for self-improvement,” said Olivia. 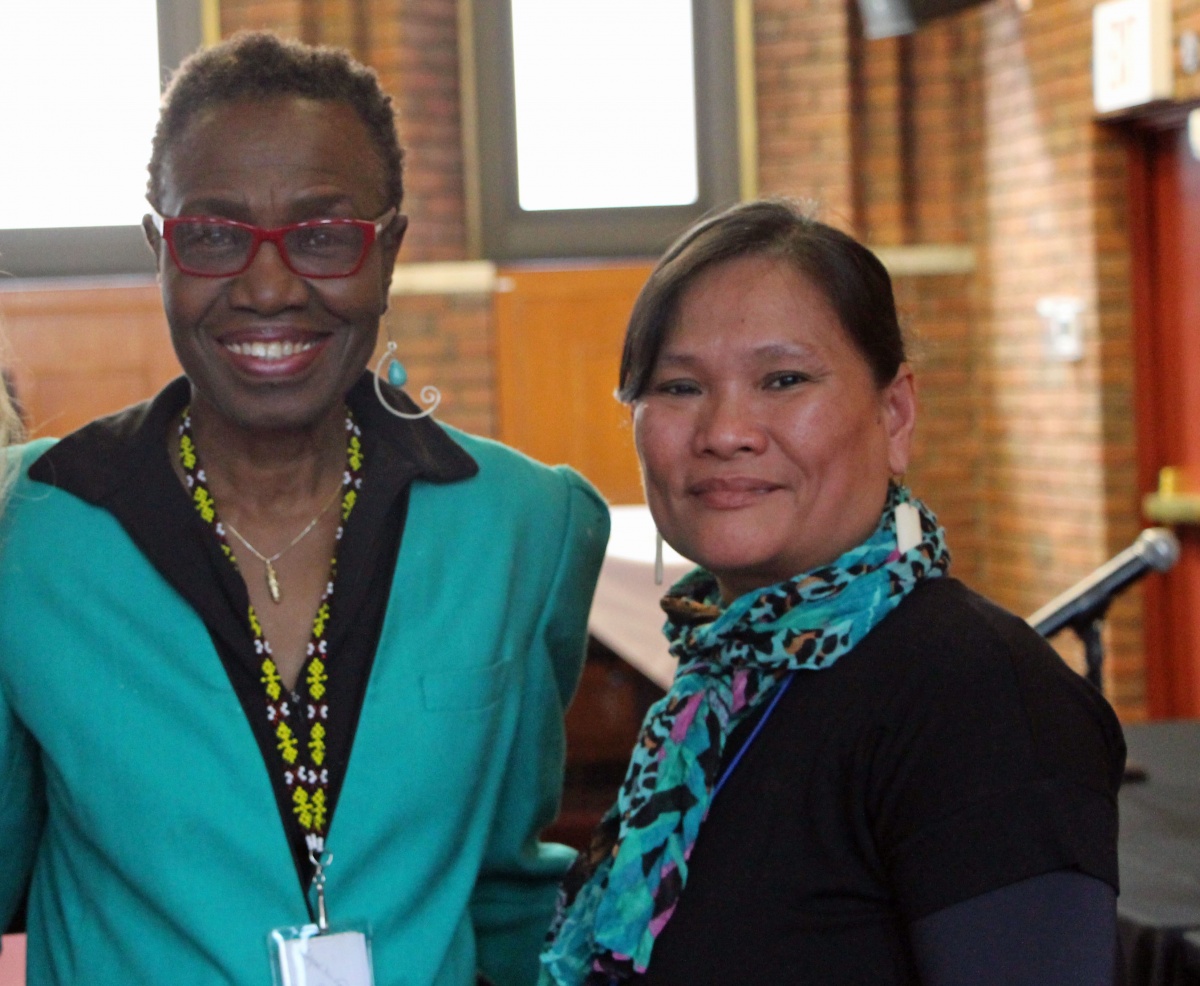 Through a multimedia presentation, Jola Diones-Mamagun, President, IAWRT Philippines (pic right with IAWRT US President, Sheila Dallas Kazman ) described the chapter’s disaster response and rehabilitation community media mobile project run by women and created to respond to the devastation wreaked by Typhoon Haiyan. The Typhoon with gusts in excess of 300 kph, hit the central region of the Philippines in 2013 leaving more than 6,000 dead, 1,000 missing, displacing a million people and destroying property.

“We began our disaster mobile project in 2015 for the typhoon survivors, most of them could barely talk because of the trauma,” said Jola.

On video Peggy Berryhill General Manager of KGUA Public Radio, 88.3 FM, Canada from Native American Media Resource center said they broadcasted for five days on KGUA radio, 13 hours straight on the air, when Santa Rosa, Canada was devastated by wild fires, and they carried fire and sheriff department press conferences five times a day, after fire destroyed cell towers and there no internet, and no telephone. 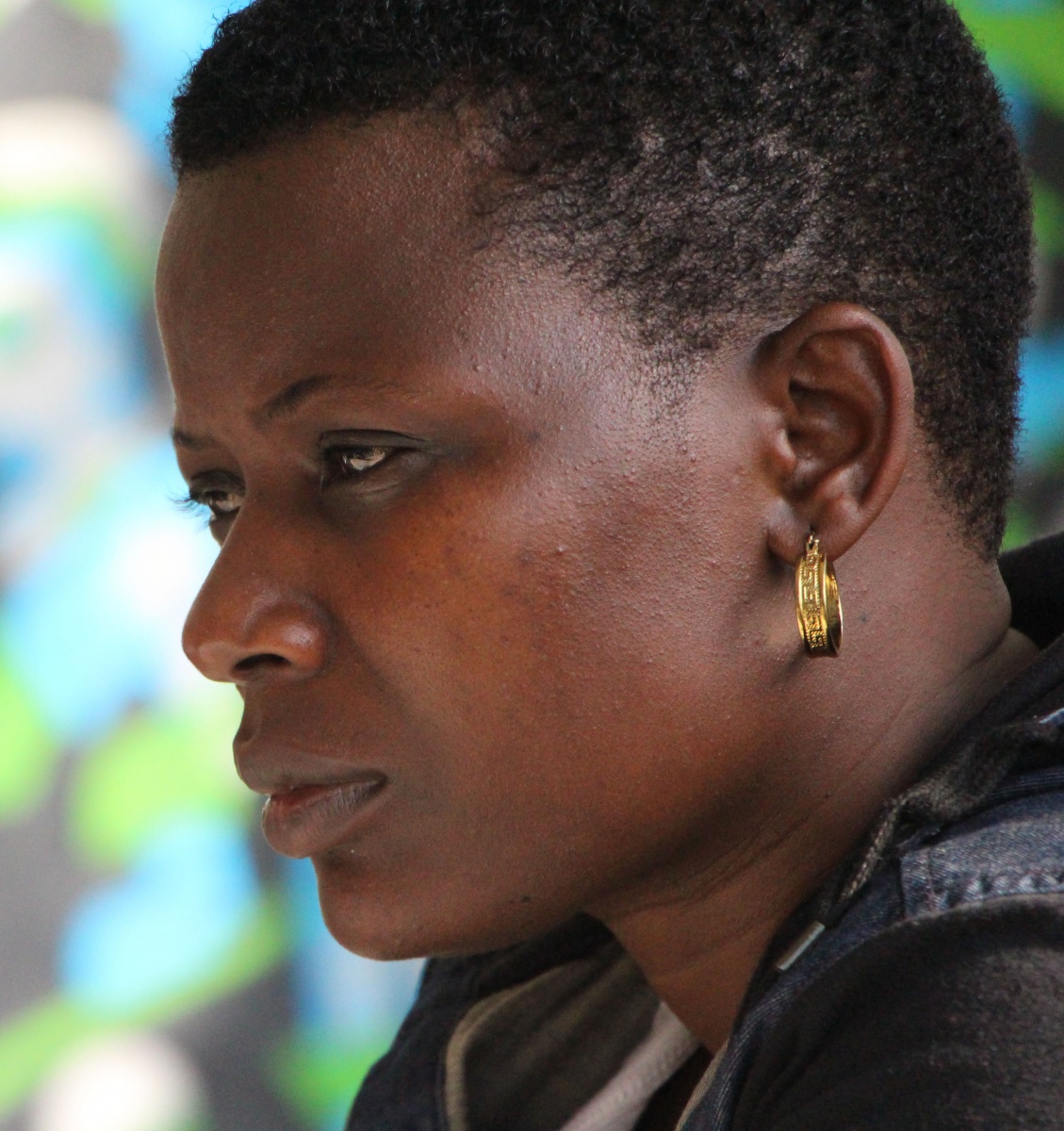 Nankwanga Eunice Kasirye, chapter head from IAWRT Uganda welcomed the room by drumming, and later talked about the devastating losses when rains come to Uganda and often as many as a 100 people die and farms and schools get washed away.

Frieda Werden said in Canada there is a campaign underway to get telecom companies to turn on the FM chips on cell phones. The chip is an FM receiver and doesn’t require WiFi to operate and connects to local FM radio stations. It also uses fewer resources, 30% less data use and three times less battery use. the chip used to be standard on android mobile phones. 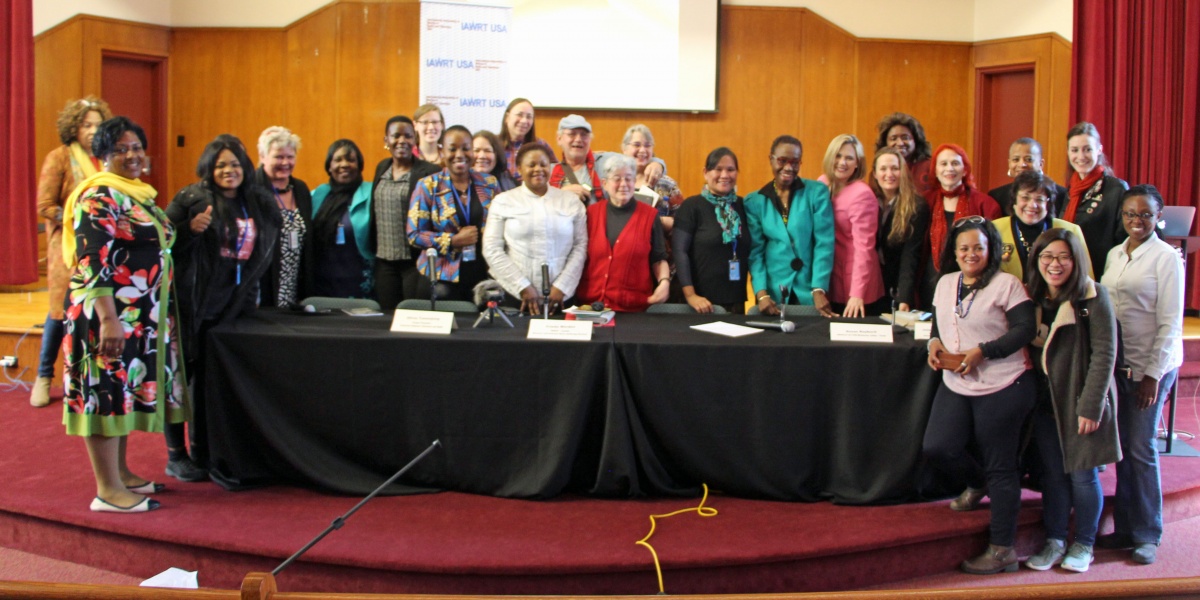 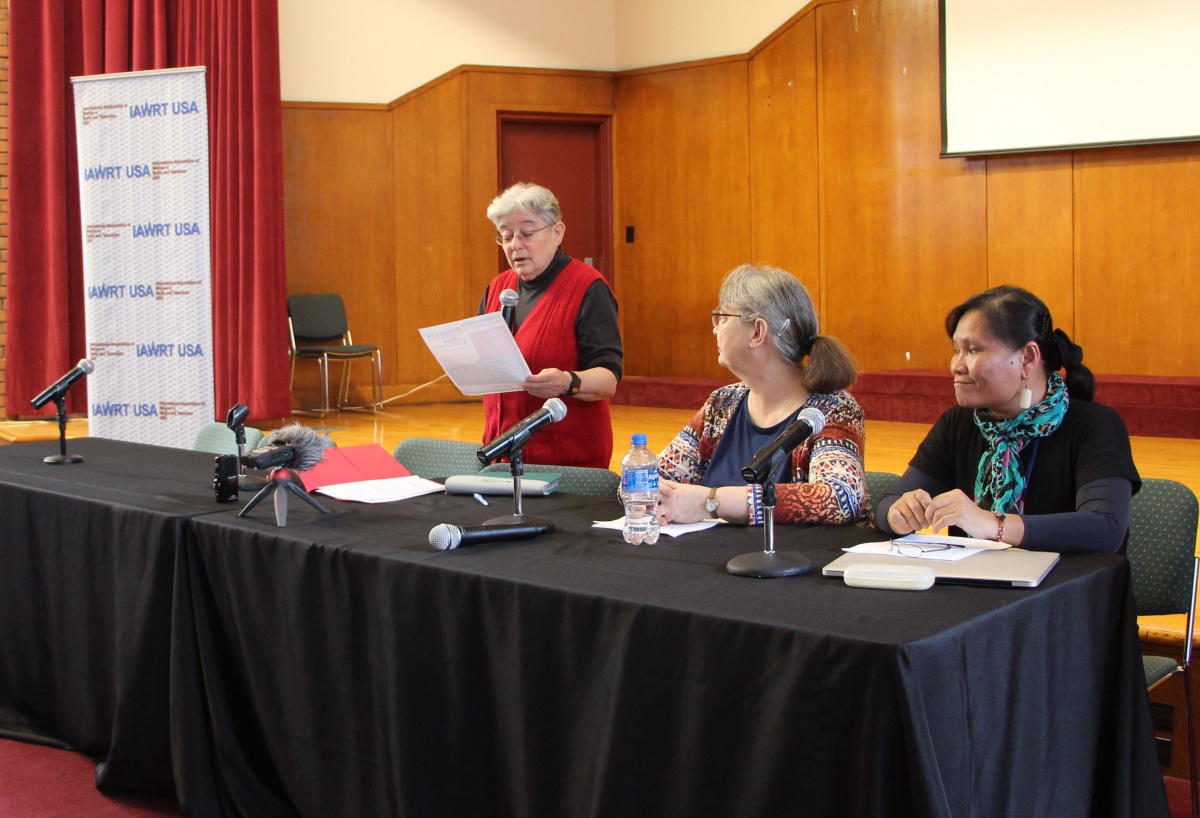 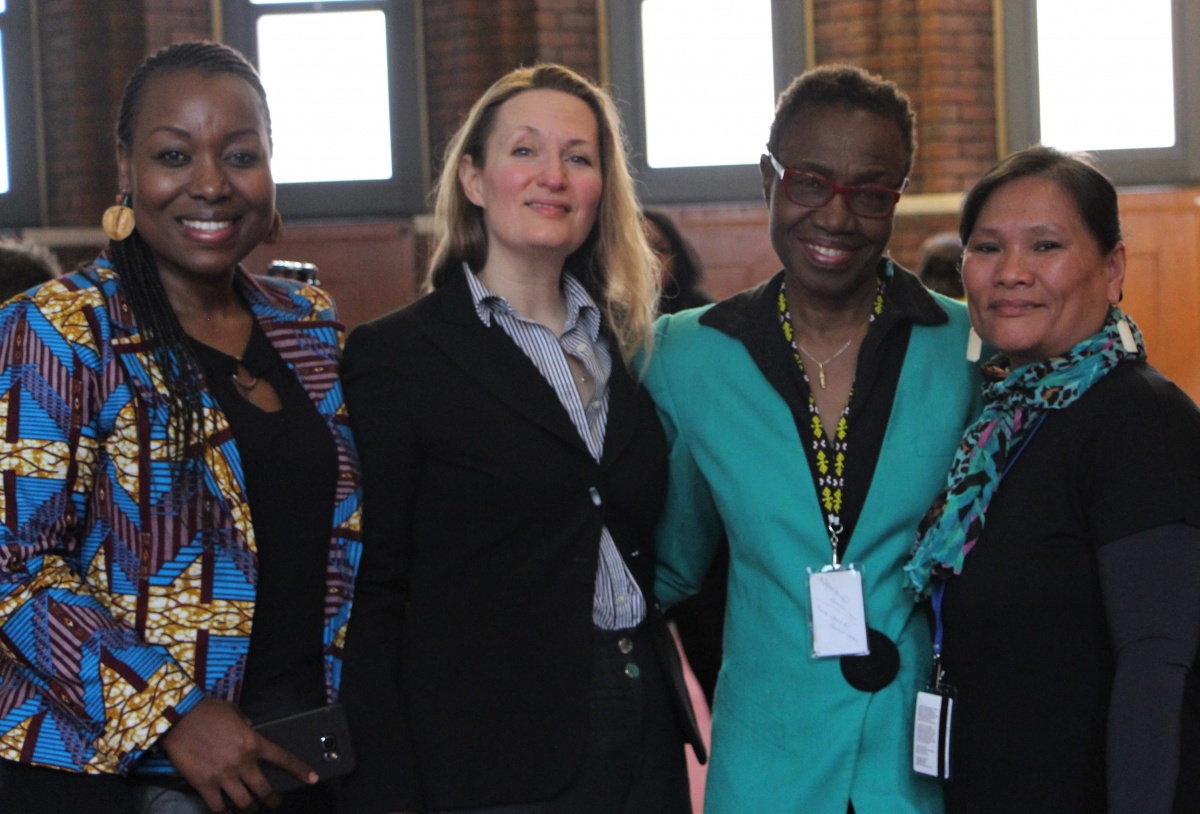 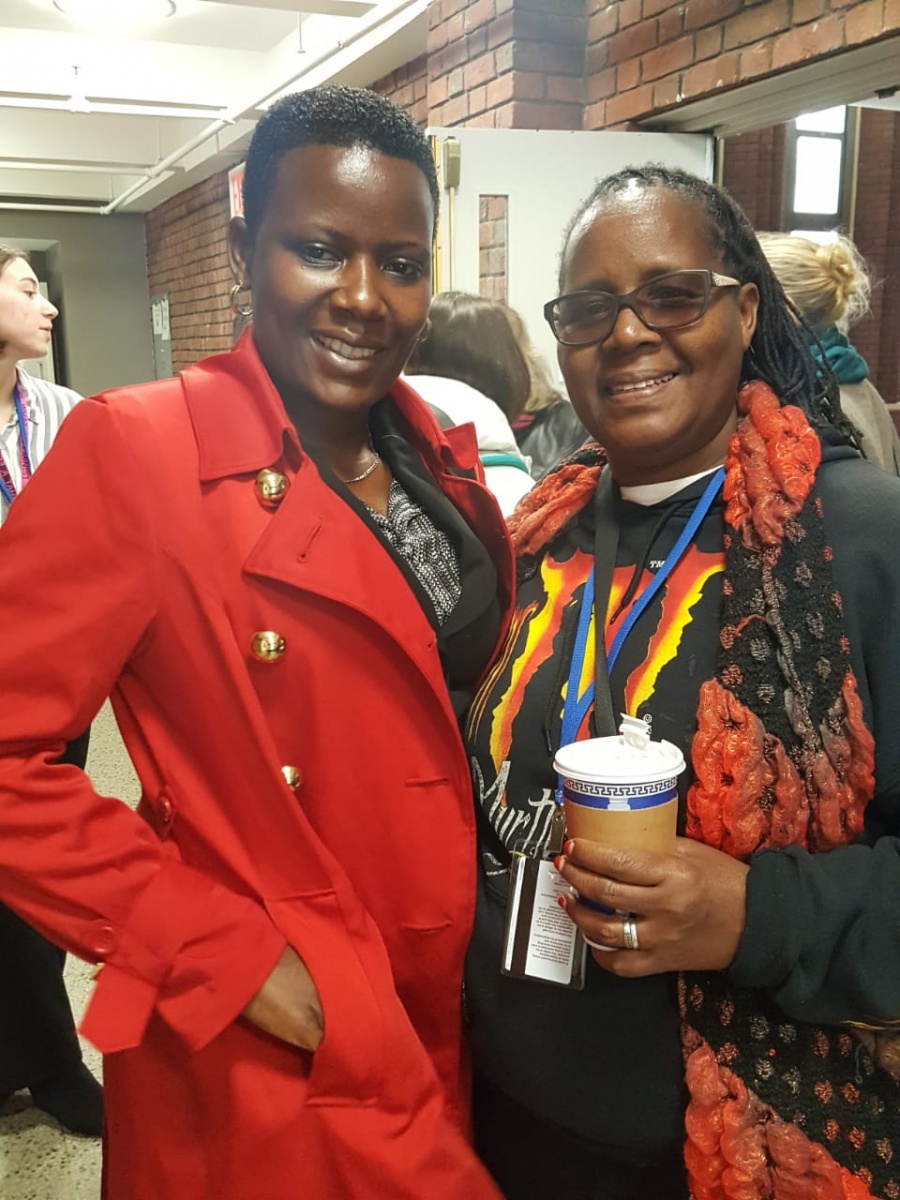