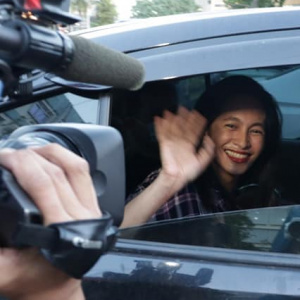 A regional court in Manila issued a release order on 5 March for IAWRT Communications Officer Lady Ann Salem. Followig the court order Lady Ann and her colleague were released at 5:54 pm Manila time, after almost three months in jail.

Salem, who is also the editor of the online publication Manila today, was arrested on 10 December on trumped up ‘weapon possession’ charges. Seven other individuals including trade unionist Rodrigo Esparago were arrested during a crackdown on International Human Rights Day.

Earlier, the local court found the search warrant used to enter Salem’s  house as invalid, rendering the firearms and explosives purportedly found in her possession as inadmissible. Government prosecutors, however, opposed her release.

However, in a four-page decision, Judge Monique Ignacio said the government prosecutor’s opposition to Salem’s release is “bereft of merit” and that the “trial court is empowered to immediately release the accused if the evidence in record clearly fails to establish probable cause.”

The court also did not find the witnesses against Salem as credible. In their accounts, they claimed to be delivering guns and ammunition to her house from May to October 2020, when the detained journalist only moved to the rented home in October 2020.

The International Association of Women in Radio and Television welcomed the decision by the Mandaluyong Regional Trial Court, but condemns the relentless and continued attacks of journalists in the Philippines.