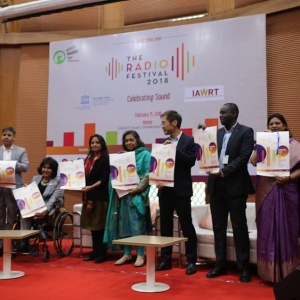 A major form of infotainment raising issues of social stigma

It was organised on February 13, 2018, by the International Association of Women in Radio and Television (IAWRT) in collaboration with UNESCO. It brought together the three main tiers of broadcasting – public, private, and community along with independent podcasters.

Well-known voices from the Indian Ministry of Information and Broadcasting, All India Radio (AIR), private FM, community radios, along with stakeholders from the Industry, and people from the NGO Sector attended the daylong festival.

The festival was described as “a unique and inclusive forum of radio, podcasters, and others engaged in digital audio offerings, which created an opportunity to showcase and share the experiences, technology, innovation, and plans for the future ” by one of the initiators of the event – Archana Kapoor, Managing Trustee of the Radio Festival and community media broadcaster.

The concept of celebrating the power of sound and gathering the different voices in one platform was a joint initiative involving herself and Pinky Chandran, radio practitioner and communication expert, and independent media consultant Rukmini Vemraju.

Mr.Al-Amin Yusuph, Advisor (Communication and information), UNESCO, New Delhi, described the “The radio festival is a very innovative idea for what is a democratising medium. 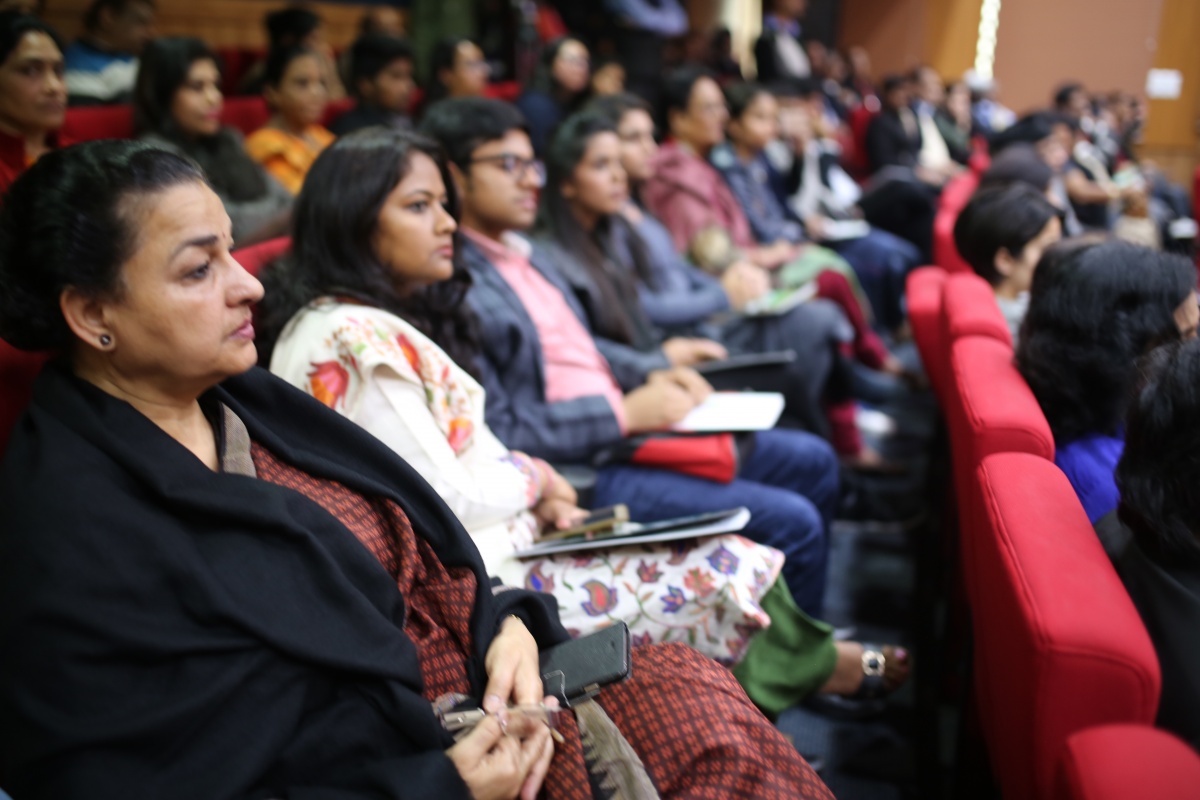 Radio was the first electronic gadget that played a prominent role in communication. Undoubtedly, it is one of the major media for broadcasting drama, stories, commentary programmes, sports news, educational programmes.

“It has a lot of impact as this is the first time all the three tiers of radio, public, community and private are on the same platform discussing the importance of changes in radio from various perspective. Moreover, they have pledged for further collaboration, which is a good thing in the media sector to tackle the difficulties they are facing.”

“For me radio is a platform for peaceful participation for the citizen in democratise discussions especially on development expressing their feelings, Desires, and concerns,” he added. 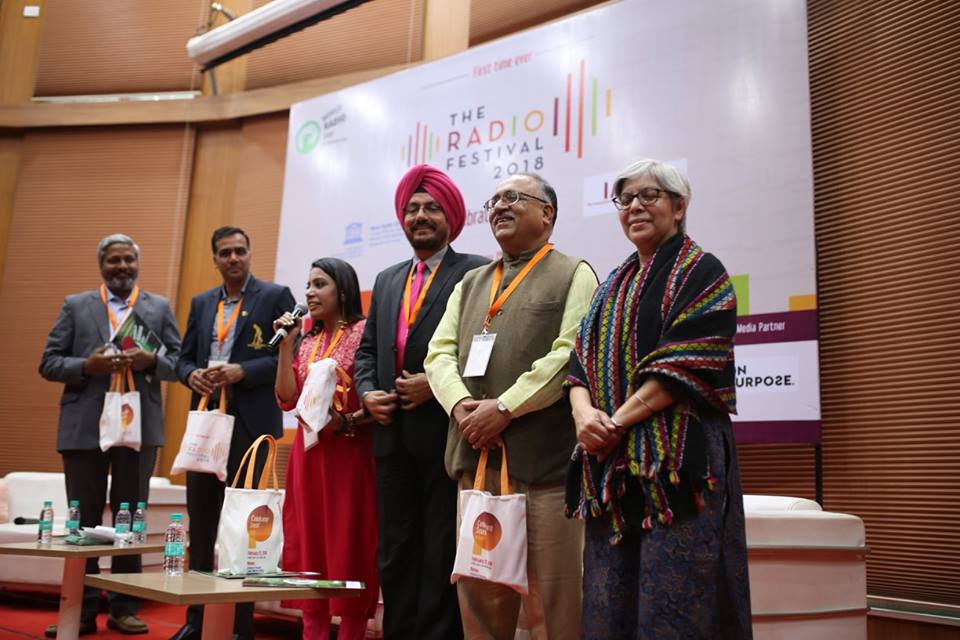 The highlights of the festival were the six interactive and demonstrative sessions on sports, importance of podcast in raising social issues, technology, musical journey of radio, impact on society through storytelling, media convergence, creativity, radio as a tool for infotainment and the role of radio to break the stereotype thoughts among people on domestic violence, and menstruation.

While speaking at the ‘Radio and Sports – Challenges and Opportunities’, Athlete Bhupender Singh said, “I once came across my father watching a sport match on television which was on mute and listening to the same match’s live commentary on the radio. This is the power of radio.”

Discussing social change through radio stories, RJ Sayema Rahman Radio Mirchi spoke about why she chooses to host a storytelling show on the radio in which she reads tales written by Saadat Hasan Manto and the relevance of his writings in today’s Indian social structure.

Talking about creativity RJ Sachin, Red FM said that creativity should be “simple and impactful.” 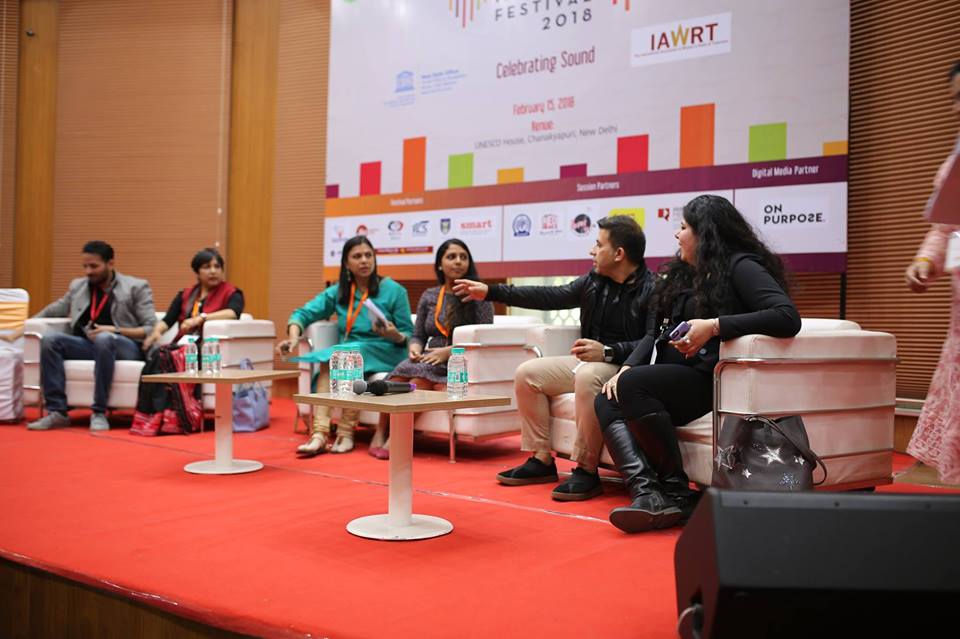 Ms. Aisha George, Executive Coordination of Hidden Pockets Collections elaborated the importance of podcast to bring out social issues in schools. Through a program titled pocket shala, she reaches out to the school students and teachers.

RJ Praveen spoke about how radio reaches to every nook and corner of the workplace.

Other interactive sessions were on different areas of radio, like sports, technology, the musical journey of radio, media convergence, creativity, radio as a tool for infotainment.

“Radio means almost everything to me,” Ms. Basudha Banerji, said, “When I joined radio in early 90’s, Doordarshan (ALL India TV) was a more glamorous cousin. I produce radio documentaries and features. I used to get many offers to join the television but I denied all saying, ‘the best picture is on the radio’. That is why I like radio storytelling.”