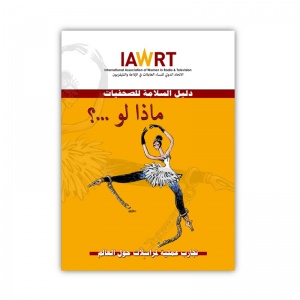 The handbook is written by IAWRT Vice President Abeer Saady. The Arabic edition is edited by Emad Nasif.

IAWRT, in cooperation with The Journalism and Media International Center (JMIC) of Oslo Met. University has launched an updated Arabic-language edition of the Safety handbook for Women Journalists.

The handbook was produced with the support of UNESCO, entitled “What if …?”. Since November 2017, when the English edition of the handbook was launched, it became one of the most important occupational safety guides for female journalists worldwide. It was used as a reference in many trainings coursed organized by JMIC in several countries. UNESCO and UN Women and other international organizations promoted it in their events and documents. Two academic researchers in Australia and Norway evaluated it.

In a serious attempt, the Arabic edition of the handbook charts a path for women journalists, for their safety.  Through eleven titles, on risk assessment, profile management, gendered based violence and harassment, travel safety, digital safety, equipment safety, crowd management, kidnapping, detention and psychological safety, Social, Ethical Safety Decisions, dealing with survivors and coverage of epidemics (case study coronavirus covid19) and other titles, the handbook urges women journalists to reduce risks and protect themselves from all forms of threat.

Saady, writer of the handbook, is a journalist and professional safety expert – trained hundreds of women journalists in conflict areas of the world . The English edition is edited by Nonee Walsh.

The JMIC hopes, that guide would be an important step for the safety of Arabic-speaking female journalists, as was the English edition before, and as we hope for future editions in other languages.

The guide is issued in a smooth language, taking into account the nature of the profession in speed and accuracy.

The JMIC reiterates that it is primarily aimed at this guide; helping Arab women journalists to perform their duties safely, safely and professionally.

Find the Arabic version of the IAWRT Safety Handbook attached below. You may also find it here.