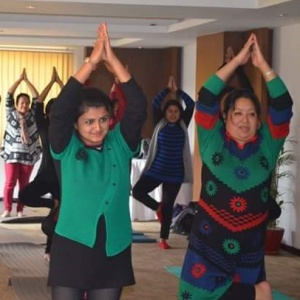 Healthy women in media has been a strong focus for IAWRT Nepal in its ongoing activities.  Yoga has been harnessed by the IAWRT Nepal chapter to assist women journalists who reported on the massive earthquake which struck Nepal on 25th April 2015.

Chapter head, Anupa Shrestha, says “The mental and emotional impact of an earthquake is one of the major invisible consequences of disaster.”

Ms Shrestha took the picture right , on March 2, 2015, she was one of the media women reporting on the destruction. 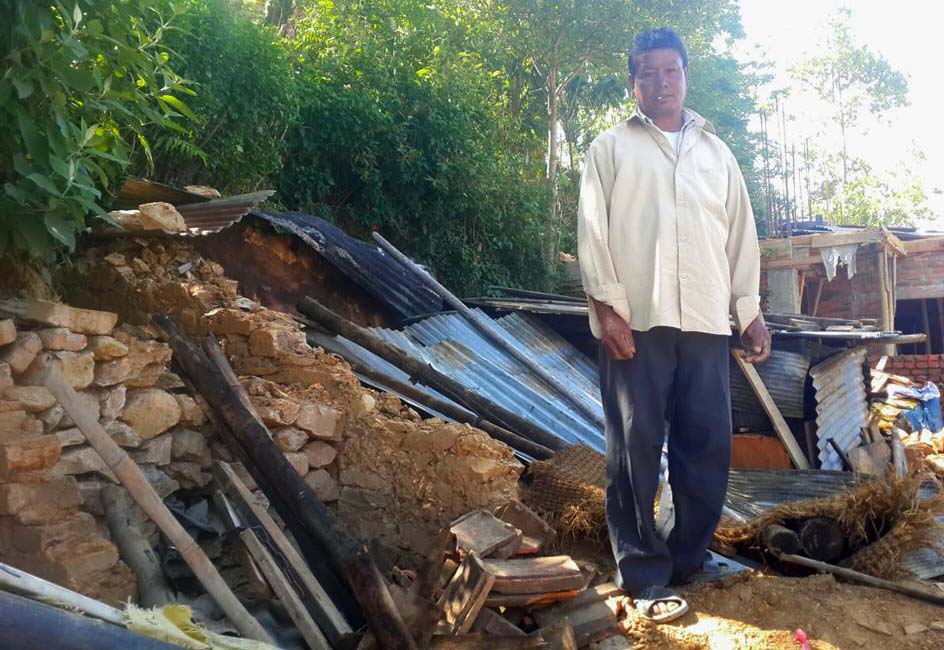 The man, Mankalu Putuwar, was searching for his possessions after his very small cottage was destroyed. He had to live in a makeshift tent after that.

Yoga comes from the root of ‘yuj’ in Sanskrit – the language of ancient Himalayas –  meaning to yoke, join or unite or union. That union between the mind, body and spirit has been harnessed for spiritual and physical healing for thousands of years in Nepal.  Women journalists and IAWRT members, who were still in trauma due to the earthquake, were made aware of post-traumatic stress and yoga’s utility for releasing stress and helping them to stay relaxed in stressful situations. The chapter arranged practical classes, teaching techniques to overcome and heal their trauma.

One session was conducted by Dr Janak Basnet, the Director of Wellness Hospital, Ananda Natural Therapy Centre (Medispa) in Kathmandu. He shared theoretical knowledge about healing life’s trauma with yoga and explained how post-traumatic stress disorder could be overcome through different kinds of yoga. He further outlined the benefits of a natural diet, and relaxation techniques such as head massage, body massage, sirodhara (a form of Ayurveda therapy that involves gently pouring liquids over the forehead). 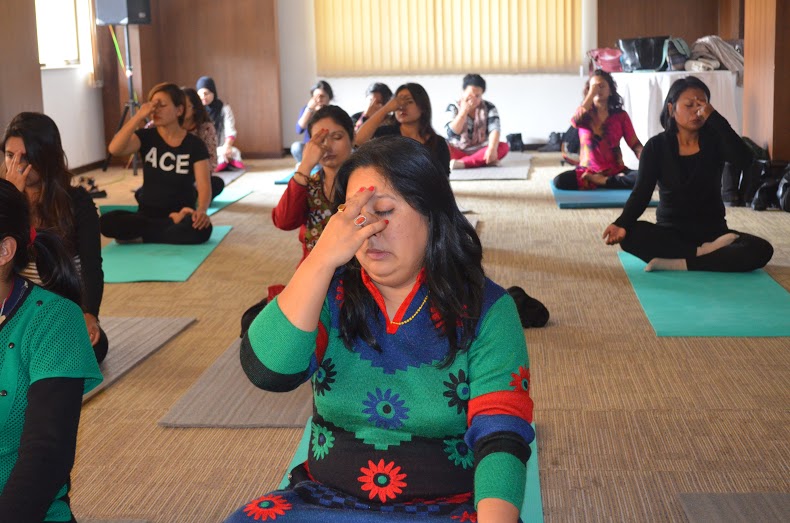 The second practical session was conducted by yoga guru Roshan Pulami. All the participants along with the yoga guru, practised stress releasing yoga postures, which he advised them to continue with at home. After completing the yoga session, some participants also received extra relaxation with various types of head message. Participants reported that program had been a helpful release.

Of course journalists must continue on, and the chapter has continued advocating for better gender recognition in the Nepali media (which is also a crucial matter for disaster recovery programs). In a one day interaction in November 29, 2015, the findings of media monitoring research done by IAWRT in the Gender Mainstreaming Project report, Gender Equality and Social Justice in Public Media were presented and the implications of the global report for Nepali media were discussed. Anupa Shrestha, IAWRT Nepal Chapter Head also shared findings of Nepali public media research done by the chapter. Delegates agreed that Nepal needs more data on the status of equality and social justice in media. It was felt that the parameters of social justice used in the IAWRT report could be replicated to assist in the sensitization of policy makers, gender workers, and media workers (houses) about gender equality and social justice in non-news programs and public speaking.

In Nepal, the research focus is on media news, but it was felt that the Gender Mainstreaming report was valuable, as its content analysis was on non-news programs –  educational, public interest, and entertainment programming. Ms. Babita Basnet, President of the Media Advocacy Group said that non-news programs are more effective with the general population and attract more listeners and viewers. So it was important to lobby producers to be more responsible in choosing characters and presenting a broad range of women’s images. Ms. Suchitra Shrestha, Film Director, agreed that that the image of women characters should change from a limited number of stereotypes. Mr. Mahendra Bista, President of the Federation of Nepali Journalists, said that the participation of women is as important as decisions about content. He said there are efforts to increase the number of female journalists, and the Ministry of Information and Communication has drafted a gender policy for media houses to encourage the hiring of more women.

Reflecting Her, about reproductive health issues for women from four different countries. It reflects on the contradictions, struggles and the veil of silence around abortion in Poland, FGM in India and birthing decisions and contraception in two African countries.

Television and radio health journalists, health workers, media and IAWRT members attended and Dr. Aruna Uprety, an expert in public health, critically analysed issues raised in the documentary and compared the present status of those issues in Nepal. She started by sharing an anecdote from 18 years ago, about a woman clad in a green sari and a ragged shoe, admitted with low pulse in a serious condition, who died right in front of Dr. Uprety in the hospital where she was working at the time. It was a case of septic a septic infection after birth, and the woman’s husband told Dr. Uprety that this was to be their sixth child, and that the couple wanted an abortion; but as it wasn’t legal, the child had to be born, resulting in the mother’s death 2 days later. Dr. Uprety said abortion was made legal in 2002 in Nepal, putting us at least one step ahead of many neighbouring countries. (Approximately 25% of the world’s population lives in countries with highly restrictive abortion laws, mostly in Asia, Latin America, and Africa). However she raised other reproductive health issues which women are facing in Nepal, like the controversial commercial surrogacy policy and Chhaupadi practise (where girls and women are kept in cow sheds during their menstrual cycle). Wrapping up, Dr. Uprety talked about how ignorant Nepal’s government is when it comes to health, and said that we must revive the importance and use of traditional herbal medicines

Dr. Kiran Regmi, a Chief Specialist Secretary at the Ministry of Health and Population, said that access to abortion is conditional, not for family planning, but according to the needs of the couple. Two-three decades back, she said, women were hesitant about abortion but now that has changed. Nowadays, women have started going for regular checkups, and can decide for themselves if they want to have an abortion or not, and where they want to deliver their child. However she acknowledged that women are suffering reproductive health problems due to societal gender based flaws. 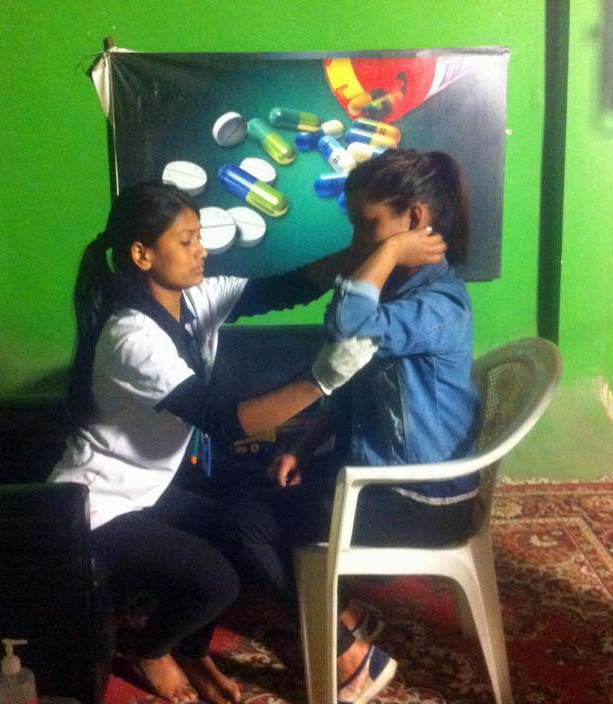 However In the remote areas of Nepal Dr Regmi says there is a huge gynaecology shortage to deal with the fistula problem (uterus prolapse as a result of unassisted childbirth, especially in adolescents). Efforts to assist women suffering the condition, she says, have been undermined by unskilled and unprofessional surgery to correct prolapses which were done massively on huge numbers of women in one day camps, resulting in deadly complications. Since there was a strong presence of health journalists, she talked about how her department could work closely with the health journalists regarding women’s reproductive health issues to bring positive change. Anupa Shrestha concluded the session by talking about the making of such documentaries on women’s reproductive health in and how it will bring changes to women’s lives in Nepal.

The chapter celebrated the 106th International Women’s day 2016 with health checkups for female journalists. “Every Media house must be sensitive towards the health of their journalists, women journalists tend to give less priority to their own health” says Anupa Shrestha,  so the chapter celebrated women’s day with health awareness talks  in association with IMAGE CHANNEL Group of Companies and Tulasi Maya Memorial Cancer Relief Foundation and Nepal Cancer Hospital & Research Center Pvt. Ltd. PAP smear tests & breast cancer screening was made available to participants.