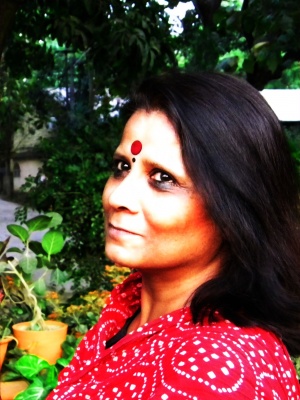 I have spent three decades as a Print, TV and Radio journalist. I have made many short documentaries for TV and radio on issues pertaining to gender, disability, mental health, developmental issues and on art and culture. I was and am associated with a radio channel on Hindustani Classical music. I am a writer, too and my short stories have won awards in international competitions. I have just joined IAWRT (July 1, 2015) as Communications Officer.

Since my childhood I was interested in writing and films. Whenever I used to read something good, I used to dream about writing a book ‘like that’ myself.  And same thoughts came after watching a good film. Radio was my passion. The clear diction and husky voice of presenters arrested my attention. And again, I used to go into my world of dreams, thinking ‘one day, even I will present shows like them. All my three dreams were fulfilled, one after the other.

After completing my Masters in History and a Diploma course in Journalism, I joined a newspaper. Through my journalistic writings I wanted to bring about a change in society. I could never digest injustice and violence – be it in any form. My first encounter with violence was the tangible and intangible facets of domestic violence. A domestic violence survivor once said, “Everybody can see physical abuse, but what about mental torture? How my self-esteem is being crushed, can anybody see that and believe me?”  This statement hit me.  In the 1980s, I began a campaign against it through my regular write-ups in the newspapers and along with it I also became Art and Culture critic.  In the 90s when I joined TV as a Correspondent-Producer I again began a sort of campaign, with my regular shows on Women and Mental Health for a TV channel. It was extremely weakening to see various facets of violence on women and young girls.  Simultaneously, I was regularly presenting shows on All India Radio. In the year 2002 I got an opportunity to initiate, curate and Head Hindustani Classical Music Station – Radio Gandharv, on Worldspace Satellite Network. Thus began my tryst with radio as a professional. For nearly 10 years I was associated with this radio channel, and without being immodest, I would like to say that listeners really loved my station. When Worldspace closed their operations in India in 2009 December, I joined TV – FOCUS Channel and later became an independent documentary film maker, writer and radio professional. In 2012, I received IAWRT-FOKUS scholarship to make a film on Changemaker. I made a short film – titled – ‘I have a Dream’ – https://vimeo.com/89276069

It was on a woman who is using music as a therapy for Special Children to empower and make them, their families and society realize the creative potentiality of Special Children.

Presently, I am running a net radio on Hindustani Classical music -http://hindustani.radioweb.in/

I write short stories and some of them have won prizes in international competitions. Short Story—A Dream is just a dream—won first prize in an online international Flash Fiction competition, 2013.

The links to my Films and Radio productions are:

Links to short stories and articles:

I enjoy doing stories about achievers, musicians, women who challenge situations and circumstances and stand with their head high. I enjoy meeting people who are never defeated – after all in life only one thing matters and that is  – ‘it is not about winning or losing, it is all about never losing hope.’

The most challenging and heartbreaking experience was covering Bhuj, Gujarat after the earthquake in 2002. It was shattering to see the vast scale destruction by nature’s fury. After that I spent many sleepless nights, haunted by the mass destruction.  As a media person, one has to be strong enough to listen to heart-wrenching tales and witness massive destruction. It is a great challenge not to break down amidst such suffering. But one has got to learn to brave it.

I was fortunate enough to work with people who had integrity and never ever made me feel that being a woman I could not walk on certain bumpy roads. I like doing the hard work and not be bound by time constraint of 9am to 5pm . I like the freedom that this industry gives. There are only two things that I do not like of this industry. The first thing that I dislike is that after highlighting an incident or an issue, we often tend to forget about that episode after some days, completely. Secondly, I do not like the race against time to capture bytes even at the cost of hurting sentiments of the survivors.

Just be honest and do the work with integrity. Things will fall at its place on its own. Respect and trust others. In media we meet innumerable people everybody, having different attitude and values. As a media person, we should have patience and respect for each and everyone. Deadlines are very important. Stick to them.

I like meeting people; having heart to heart talk with them; knowing them and subsequently winning their trust and friendship. I like sharing my experiences and imparting knowledge to people without acting as an ‘advisor’ to them. I make them feel that they have a friend on whom they can bank upon. Because I am modest and humble, people generally open up with me very easily. I do not indoctrinate or frighten people with my knowledge. In fact, I share a slice from my life’s innumerable experiences. In this process, I win friends and they respect me for respecting their identity and knowledge.