The first International Development Cooperation Meeting on Gender and Media will be be held from 7 to 10 December 2015 in Geneva, Switzerland. The Global Alliance on Media and Gender, a partnership involving over 800 media, civil society, academic, private and governmental organizations, incuding IAWRT, will also hold its first general meeting.

GAMAG is designed to be the global mechanism through which the gender and media section (J), of the Beijing Declaration and Platform for Action (BDPA) can be systematically implemented and monitored.

Women’s participation, their leadership and fair representation in media and technology are way below that of their male counterparts. After four decades of research and development actions, little change can be celebrated. The world famous actor, Geena Davis observed that at the present rate, it will take another 70 years to achieve gender equality in the media. This is more than four times the number of years agreed upon by the international development community to achieve the new sustainable development goals, by 2030.

The events are co-hosted by the Republic of Lebanon and the Hellenic Republic (Greece) and supported by close to 20 UN organizations. Both events will coincide with the International Human Rights Day, December 10.

To register for these events please following the link: http://tiny.cc/IDCGenderAndMedia2015

Money up for grabs for investigative reporters (applications from female reporters are especially welcome): CALL for ideas: Investigative journalists in Europe interested in privacy, the environment, finance or lobbying can apply for a by-subject cross-border grant with Journalismfund.eu. The application deadline is 25 November 2015.

Journalismfund.eu http://journalismfund.eu is an independent non-profit organisation that stimulates investigative journalism in Europe. One of the ways it does so is by giving research grants to journalists. For their next application deadline, which closes on 25 November 2015 at 11.59 pm Brussels time, they have €41,000 to distribute. The grants are only for stories focusing on

– surveillance and privacy;
– nature and the environment;
– economy and finance (public spending and public debt, corruption); or
– lobbying. 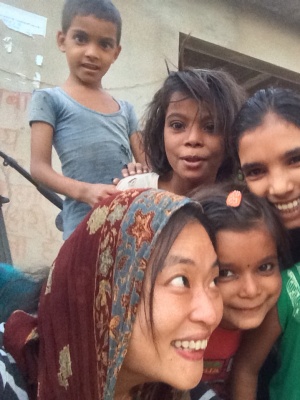 Location: Malaysia, and all over Asia

Produce and manage various type of projects, from corporate videos to tv documentaries

Meeting interesting people in different part of the world always interested me. Being a trained sound engineer gave me the opportunity to be a location recordist to start with and it opened the doors of broadcasting.

This job brings me insights into numerous interesting subjects, I gain more in-depth understanding of a variety of different areas due the intensive research work required. I am learning new things on every unique project, meeting numerous specialists in their own field.

The most challenging part of my job is to be able to calm people around me, when things do not workout as planned.

Can’t think of working in other industry, loving every bit of it!

Keep on doing what I’m doing while still can, does that count as a goal? I’m an organiser come improvisor, long term planning is not the sharpest knife in my pocket.

Think and act fast, make a decision and go with it, the world doesn’t wait. Specialise in something you really enjoy.

Please also provide a photo and examples of your media projects or links to where they can be found.

One of my proudest projects on www.balithefilm.com and my company’s website www.gsproductions.com.my 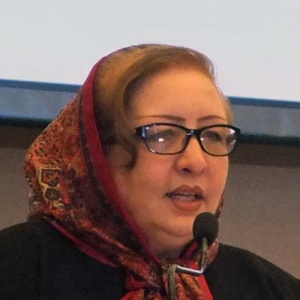 An independent public media company in Afghanistan, the Killid Group (TKG), has been targeted in a bomb attack on one of its radio stations in the city of Jalalabad.ESP

The Executive Director of the Killid Radio group, Najiba Ayubi, (pictured) says it was one of the network’s 11 provincial radio stations, which the group operates along with two national magazines. There were no casualties, however the station in the eastern province of Nangarhar, has been extensively damaged.

The group advertises its editorial policy as one which “embraces one main concept: Afghan ownership of Afghanistan’s process … a commitment to one principle: people’s right to be informed and to be heard.”

Najiba Ayubi, who led the entire Killid group for more than a decade, was a keynote speaker at IAWRT’s biennial in New Delhi, India, in September. There she described her pain about the disasterous and worsening situation for Afghanistan’s media, where scores have been killed and journalists work with the constant threat of bombing and attacks. She continues working in Afghanistan despite receiving death threats herself, and was a recipient of the 2013 international Women’s Media Foundation ‘Courage in Journalism Award’.

She has told IAWRT that two explosions targeted Nangarhar Killid Radio early in the evening of October 10th.  “A caller to the head of the Jalalabad radio station introduced himself as a ISIS (Daesh) spokesman, and claimed responsibility for the attack.” However she says there is no confirmation of the caller’s identity or affiliation.

There have been a number of bomb attacks in Jalalabad in the past ten months, where there is heavy fighting between militants purporting to be from the Taliban and the Islamic State group. The United States has also launched drone attacks targeting what it believes to be militant strongholds for both groups.

The increasingly dangerous environment for Afghanistan’s media was given further confirmation in the following days, with Khaama press reporting that  the Taliban  is threatening to attack private TV stations, 1TV and Tolo in Kabul, for spreading “propaganda” against the Taliban.

“The bomb attack on the Killid radio station is one more example of how difficult it is for journalists to do their work today,” says Gunilla Ivarsson, President of IAWRT. “The situation for women journalists in countries like Afghanistan is especially difficult, with hundreds leaving the profession and even Afghanistan itself.” 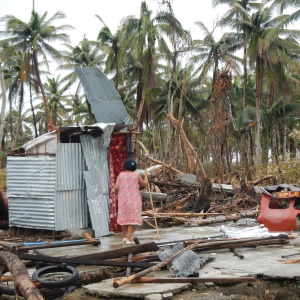 In response to the lack of a mass medium that tackles disaster response and rehabilitation in a highly vulnerable region, IAWRT Philippines chapter is establishing a community radio station to be based at the so-called ground zero of the strongest typhoon in recorded history. ESP

To kick it off in early October, women community radio broadcasters in the Philippines organized and conducted a four-day workshop for the establishment of a disaster response and rehabilitation community radio station  in Tacloban City. That was followed by a  two-day community-based radio training in late October.

With gusts in excess of 300 kph, Typhoon Haiyan (known locally as Yolanda) struck the entire central region of the Philippines (the Visayas) on November 8, 2013, killing a yet-undetermined number of people, displacing millions and destroying property worth hundreds of billions of dollars. Last year, the Philippines National Disaster Risk Reduction and Management Council (NDRRMC) confirmed 6,300 fatalities across the country. However some NGO’s estimate a much higher toll in Tacloban City alone. 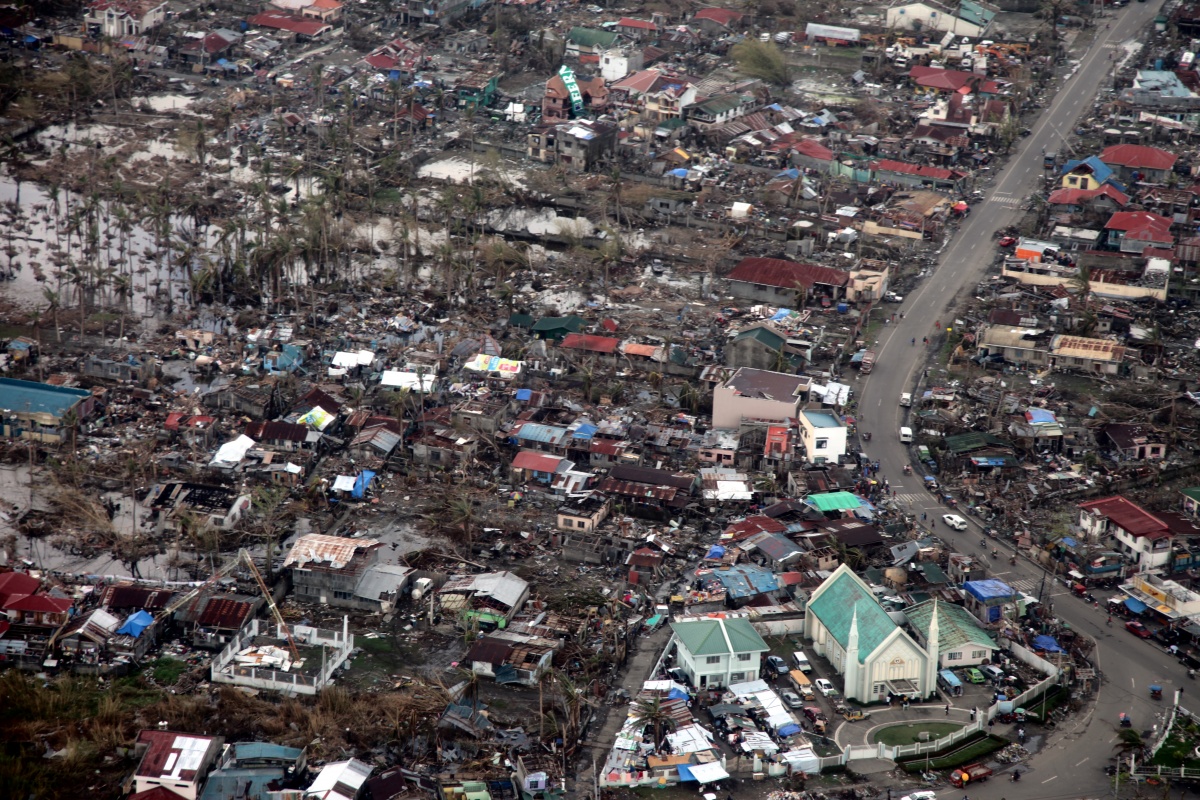 Nearly two years after the disaster, poor Haiyan survivors have yet to be permanently resettled and social services remain sorely lacking across the islands of Leyte and Samar, as can be seen in this video from the affected region.

“Climate change experts predict that the Philippines will always remain vulnerable to typhoons as destructive as Haiyan.  Our aim is to help the people of Eastern Visayas prepare for this, so-called, new normal,” IAWRT Philippines chapter president Jola Diones-Mamangun said. 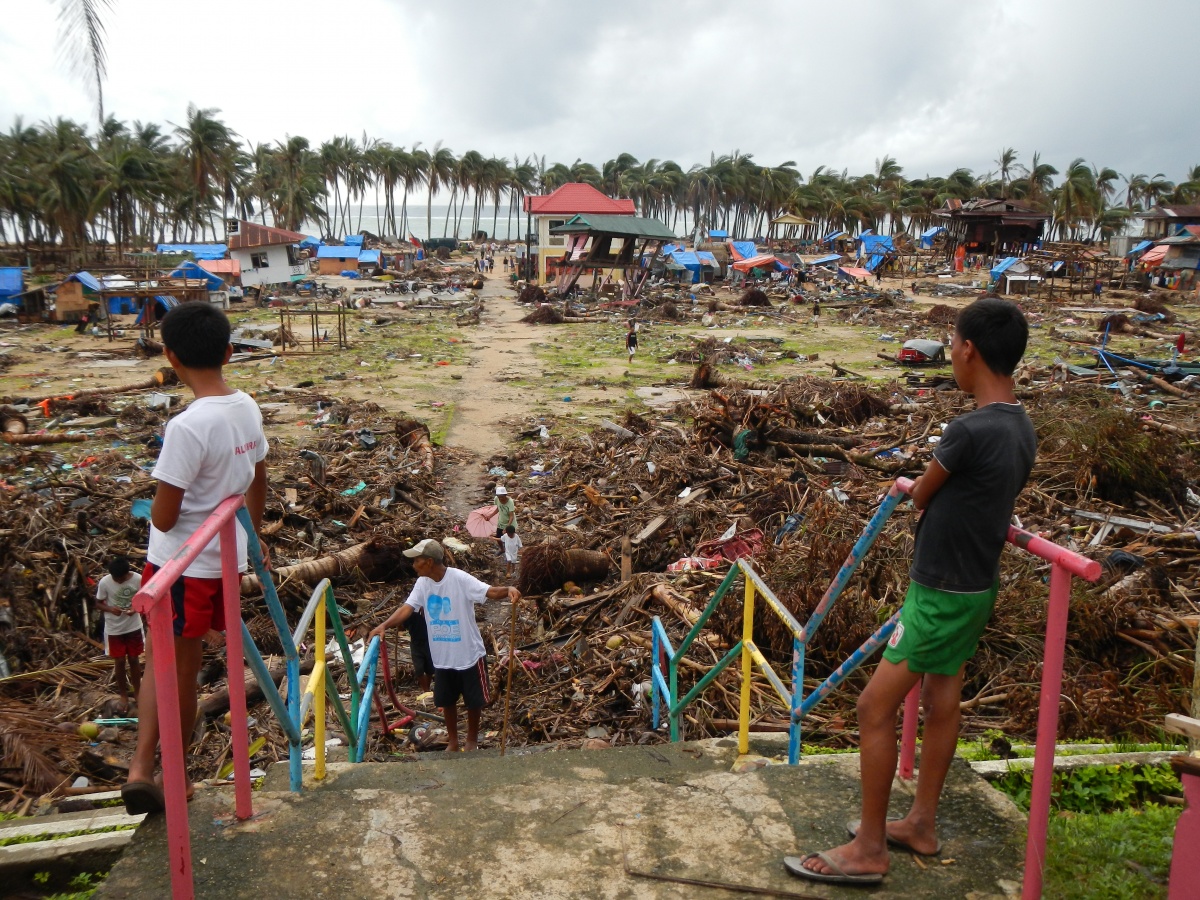 “A community station is the most viable solution to the lack of a sustained and dedicated mass communication platform to help the survivors to rise up from this disaster and prepare for the next,” Mamangun added.

Unlike existing commercial radio stations in Eastern Visayas, the community radio station will be non-profit and will be dedicated to helping marginalized sectors recover from Haiyan’s devastation.

IAWRT’s International Board recently approved a grant funded by Norad through FOKUS for the establishment of a mobile disaster response and rehabilitation community radio station in Haiyan-affected areas.

“Aside from being community-owned, this station shall have the capacity to be mobile.  It means we can transport all its equipment to an area within the region which is being threatened or is suffering from another disaster and return to Tacloban City after,” Mamangun said. 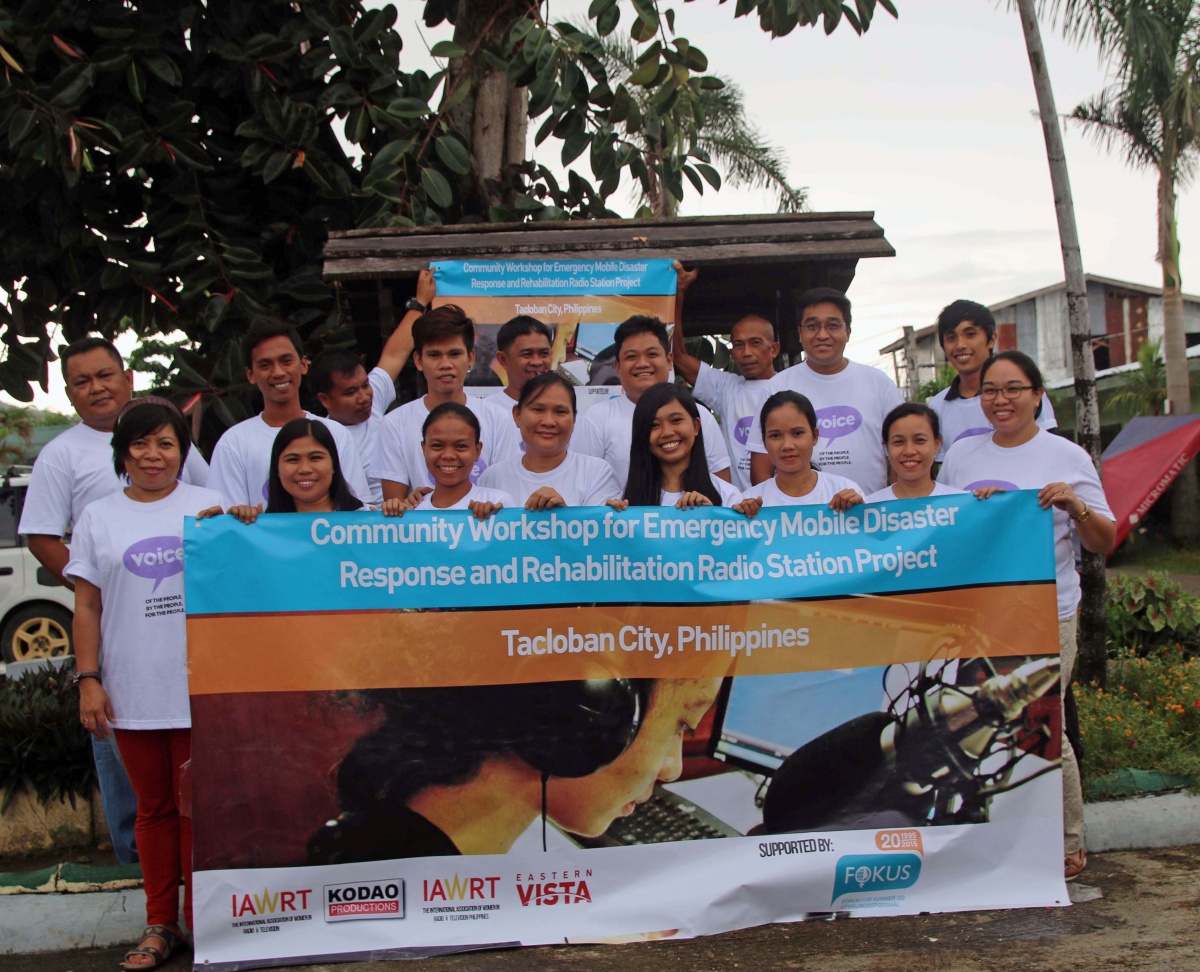 The workshop in Tacloban is the first in a series of activities aimed to train its first group of broadcasters. It included discussions on the state of the Philippine mass media as well as the need for more community radio stations to serve women and other vulnerable sectors of society.  Writing for radio, interviewing, reporting, the broadcast clock, and on-air presence were included in the workshop.

“What makes this project groundbreaking is the fact that women are leading its establishment and women shall occupy executive positions in its management,” Macapobre said.

Women leaders from the peasant,* fisher folks, urban poor, academe and the church are being invited to form the radio station’s local board, while women candidates are being interviewed to be its first station manager.

In late October, a group of 27 delegates, the majority of whom were women, came from different parts of Samar and Leyte to participate in two days of community radio training hosted by IAWRT Philippines, again in partnership with Kodao Productions and Eastern Vista. it was held at the UP Vista Office, office of student publications of the University of the Philippines – Visayas Tacloban College (UPVTC). 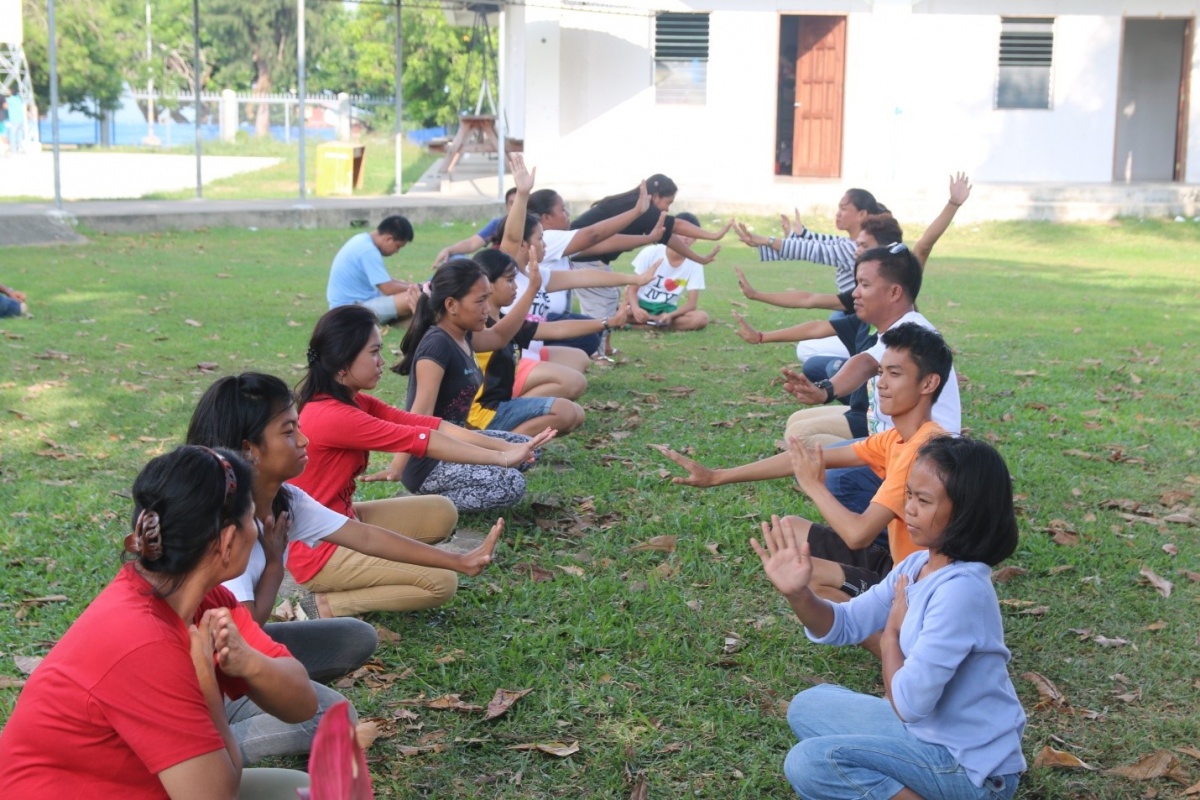 The delegates, who will soon serve as the reporters and anchors of the radio station, received confidence and team building training along with news writing, radio broadcasting and field reporting. The first day of the training focused on boosting the confidence of each participant, with workshops in basic acting and news writing. It included broadcast training on breathing and word pronunciation.

The second day of the training began to put theory into practice, with a test podcast where one of the participants served as the anchor and nine of them were field reporters. Mamangun says that In early November, they will be put to the test as part of the local media.  “An Eastern Visayas-wide mobilization and activity  themed ‘Two Years of Injustice,’ will be held to coincide with the second anniversary of Typhoon Yolanda [Hiyan]. The trainees will serve as field reporters stationed at different parts of Samar and Leyte.” 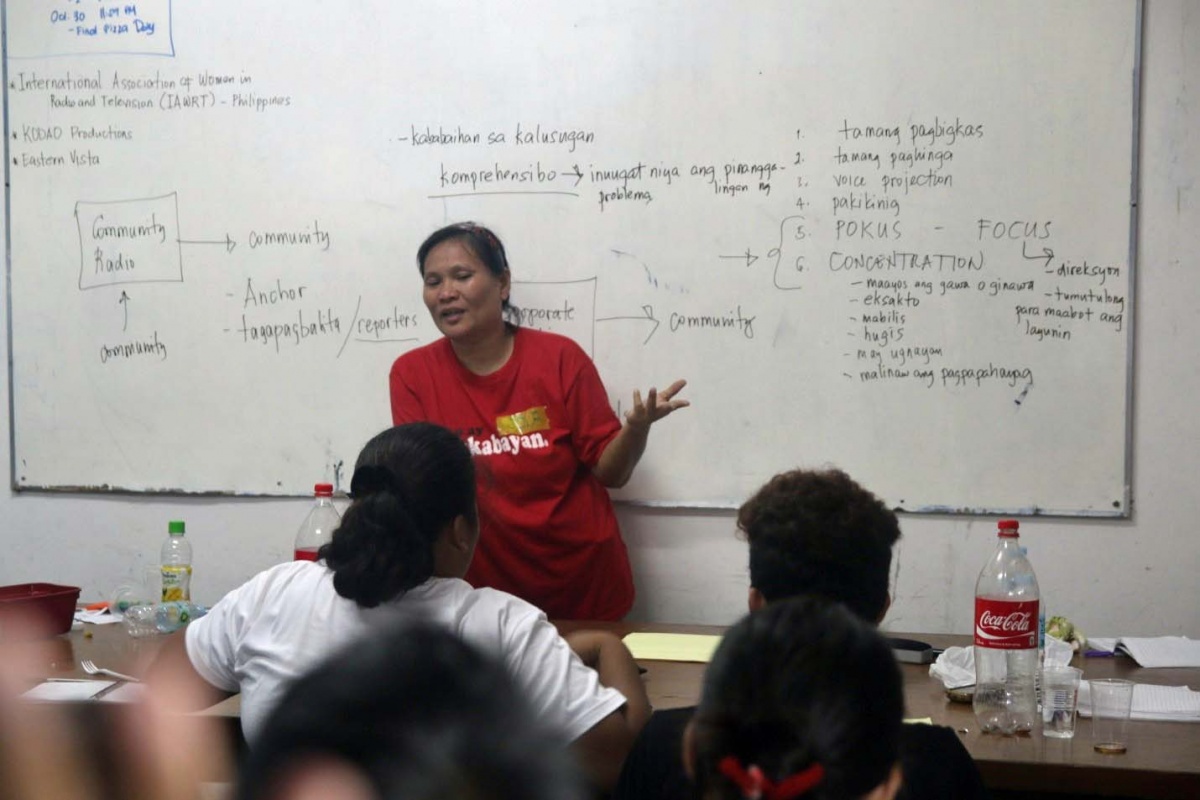 May Macapobre says emergency radio stations were set up after Typhoon Haiyan, but they didn’t last. “They were dependent on the presence of foreign disaster response and humanitarian organizations. Now that their interventions are over, those stations stopped broadcasting. What we need is sustainability and that is only possible if the people own the station.”

“Climate change is real and the best way to prepare the people to meet the challenges of recovery and preparation for more disasters ahead, is an education tool in the form of their community radio station, she explained. IAWRT Philippines hopes to initiate the station’s test broadcast in December.

* In the Philippines, particularly among the democracy activist sectors, “peasant” is a badge of honor. It means belonging to the largest sector as well as the main force for social transformation.