“Chilling effect on freedom of the press.”Thai Journalist Chutima Sidasathian and her colleague Australian journalist Alan Morison, will not serve a jail sentence after they waited six weeks for a judgement as to whether they defamed Thailand’s navy. The trial went ahead despite the United Nations human rights office, (UNHRO) and international legal, human rights and media groups urging the Thai government to drop criminal defamation charges. Alan Morison is the editor of Phuketwan and Chutima Sidasathian writes for the small English-language newspaper which reports on the Thai island of Phuket. The defamation claim is over the citing of a Reuters investigative report alleging the involvement of Thai naval security forces in smuggling Rohingya asylum-seekers fleeing Myanmar, where ethnic Rakhine Buddhists and Rohingya Muslims have been involved in numerous clashes. there was concerns amongst journalist groups that only the small puublication was charged.

Phuketwan describes itself as reporting on “Phuket and its people, including both smiles and warts”, and the two journalists are award-winning human rights reporters. The paper publishes on line http://phuketwan.com/ and they have also been charged under the Computer Crimes Act, which came into force in Thailand in 2007, “seeking to bar the spread of material believed to threaten national security or create panic,” according to UNHRO.

A letter of protest sent to the Prime Minister, General Prayuth Chan-ocha, by a number of human rights groups in early July says “the post on the Phuketwan site only reproduced one paragraph from an article (“Special Report: Thai authorities implicated in Rohingya Muslim smuggling network”) by Reuters, and that was not contested by the Navy.” https://www.fidh.org/International-Federation-for-Human-Rights/asia/thailand/thailand-drop-charges-against-phuketwan-journalists-alan-morison-and

The UN human right office says Chutima Sidasathian and Alan Morison faced up to two years’ imprisonment on the criminal defamation charges and five years in prison for breaching the Computer Crimes Act, as well as fines equivalent to $3,125.

In condemning the laying of charges last year, the spokesperson for UNHRO, Ravina Shamdasani, said such criminal prosecutions for defamation have a chilling effect on freedom of the press. “International standards are clear that imprisonment is never an appropriate penalty for defamation.”

A number of international groups monitored the trial, follow the links below for further information. 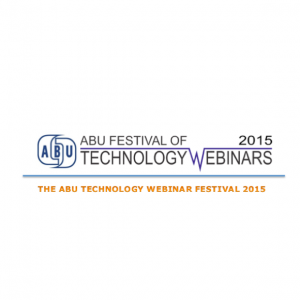 HOW THE WEBINAR SESSIONS WILL WORK

The content for these webinar sessions are taken from the workshops and conference sessions of the Digital Broadcast Symposium and other events held within the year. Each webinar session will be around 90mins, starting with a presentation by an expert on the subject matter followed by a Question and Answer session. The speaker or one of our colleagues from the ABU Technology department will be available to answer your questions. The webinar festival will start from 17th Aug and will continue until 21st Sept, with one session available every day except Sat and Sun. The webinar sessions will start at 0130hrs GMT (9:30am KL/Sin/HK time) each day and will be repeated at 0700hrs GMT of the same day (3:00pm KL/Sin/HK time). This is to facilitate participation of attendees from different timezone.