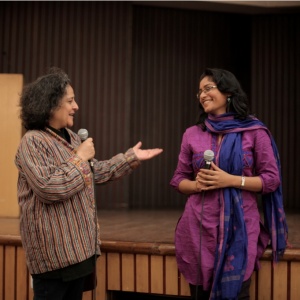 A much awaited event of Delhi’s cultural calendar, the 10th IAWRT Asian Women’s Film Festival, will be held from March 5-8 to mark International Women’s Day.

The uniqueness of the festival is that it showcases the works of women filmmakers of Asian origin in a range of genres—documentary, short fiction, animation, experimental and feature fiction—exploring a diversity in country, content and form.

Some of the highlights of this year’s festival are Sleepless Nights a powerful cinematic documentary by Eliane Raheb from Lebanon on the possibility of forgiveness after the civil war, My No-Mercy Home a courageous film from South Korea by Aori on a young woman’s legal battle against her father in a case of child sexual abuse,…And the Unclaimed a moving film on the suicide of two lesbian girls by Debalina. The notable films of shorter duration include Carpet Weavers by Batul Moradi, TrueLoveStory by Gitanjali Rao, The Summer Flu by Priyanka Chhabra and Aisa Nahun Hua tha Tahira by Rajula Shah.

This year marks the tenth edition of the festival and altogether 26 filmmakers and sound artists will be attending the festival to participate in post screening discussions.

Says Anupama Srinivasan, the Festival Director, “What started as a two-day documentary festival in 2005 as part of the IIC-Asia Project conceived by Dr Kapila Vatsyayan and the late Jai Chandiram, has today grown into a four-day event across multiple venues showcasing the works of women directors of Asian origin in a range of genres. What has remained the same is that we continue to celebrate the creativity of Asian women filmmakers”.

Apart from a sparkling line-up in the general programme, the countries in focus are Sri Lanka and Taiwan. “We received over 35 entries and it was amazing to see the range of work by Taiwanese women filmmakers. The four films that are part of the selection present to us the concerns facing modern Taiwan. We bring to you three documentaries and a feature fiction that share the experience of its people as a nation, a community and a family,” says Uma Tanuku, curator of the Taiwan segment at the festival.

Hu Tai-Li gently presents in her Voices from Orchid Island, the indigenous Yami people coping with the onslaught of tourism and storage of nuclear waste on their island. Ho Chao-Ti hides nothing in My Fancy High Heels as she explores the commerce, the factory, the workers and the animals being cobbled together to supply to the high end market. In Nyonya’s Taste of Life, Wen Chih-Yi lets you savour the small joys that sustain two young migrant women looking after the young and the old in Taiwanese homes.

In the three films that are part of the Sri Lankan selection, the women directors ask a fundamental question: What constitutes an ethical and democratic society? Do the majority and minority populations have equal rights to participate in acts of citizenship? If ethnic minorities cannot make that claim, what does that say about contemporary Sri Lankan society?

Says Subasri Krishnan, the curator of the Sri Lankan segment: “While all the films do not necessarily deal with the aftermath of the conflict between the Sri Lankan State and the Tamils, they do in some ways reflect the tensions of a multi-ethnic society where equal rights of citizenship is not always an entitlement. Ennakum Oru Per (feature fiction) and White Van Stories (non-fiction) are set in the context of the ethnic conflict between the Tamils and Sinhalas, while Ingirunthu (fiction) deals with the struggles that the upcountry Tamil plantation workers have been through, in order to be recognized as equal citizens of Sri Lanka. There will also be a special panel discussion on the post conflict scenario in Sri Lanka.

The 10th IAWRT festival also includes a novel segment titled Soundphiles—a curation of sound works. “Soundphiles is a celebration of listening. Our worlds today are navigated increasingly through images with sound running as a hidden layer, a track that runs incessantly and yet remains invisible. In the first edition of Soundphiles, we sought work from diverse practices, from radio journalism to more experimental sound art,” observe curators Iram Ghufran and Samina Mishra. Titled– Many Echoes, Many Worlds, Soundphiles comprises works by filmmakers, artists, journalists and media/arts students drawing you into a diversity of worlds in a variety of forms – the rhythm of the textile mills of Malegaon, broken sounds from the contested streets of London, a deafening bombing in Iran, scratchy magnetic tracks of old Hindi films, poems recited and even an ethereal dreamscape from Turkey.

A seminar titled—Hum Gunahgaar Auratein/ We Sinful Women—celebrating art and resistance by women in South Asia will be held on March 8 at the Goethe-Institut/ Max Mueller Bhavan. The event is organised around the question: how do women artists and activists in South Asia strategise and survive in repressive environments living as they do in a world of suicide bombing, drone attacks, and ruthless militarism in different names and guises? What is the power of art and social activism, if it can be swept away by guns, bombs, violence?

To discuss and debate these issues, IAWRT India has invited leading South Asian writers, poets, artists, performers and activists to share their experiences and journeys amongst themselves, and with an interactive audience.

The programme also includes two installations—Cycle of Sovereignty and Memory of Water. The first is a project by the Zenki Collective that looks back at the role of a women’s collective in the 1990s, the Tinsukia District Mohilla Committee, which took on an important role with their activism against the state’s human rights violations. The cycle and weaving become important symbols of their political activism: the cycle made them mobile and allowed them to travel to markets to sell the cloth they wove in the collective, as well as to organise political meetings all over Tinsukia and its adjoining districts. This project celebrates their spirit of resistance and commitment to social and political change in their area.

Memory of Water is an installation by Jenny Pinto, one of a handful of studio paper artists in the country. Through paper sculptures and photographs, she explores the nature of our relationship with water.

Is it to be found in the spaces between wetness and dryness? What else can we find in spaces, in silence, in emptiness, on edges?

And finally, in order to encourage the student community to view documentaries by women and on women, screenings will be held in different colleges and institutions during the entire month of March.