A 6-Month intensive nationwide media campaign has been launched in Cameroon.

The campaign seeks to fight voter apathy amongst women and ensure that all female candidates use various media platforms to present their development projects. It involves women working for public and private media organisations, be they online, print, radio or television, whether reporting in English, French or local languages.

“The campaign seeks to give voices to women” says Becky Bissong, National Coordinator of the Cameroon Association of Women in Media (AFMEC) and head of the IAWRT Cameroon Chapter.

We are trying to offer female candidates different media platforms for the 2020 elections. We will give them free space to profile them and invite then to radio or make videos to showcase current politicians to let those women tell their stories.

“If capable and potential women who are interested in politics are sensitized, encouraged and given visibility on different media, these women can effectively ascend to political leadership in local governance”.

At the end of the exercise it is expected that men would also be encouraged to vote for female candidates, thus increasing the number of female mayors and parliamentarians in the country.

Cameroon has not had council and Legislative elections since 2013. The term of office of councillors and MPs was extended by the long-serving President, President Paul Biya, due to the socio-political upheavals in the predominantly English-speaking North West and South West regions and Boko Haram attacks in the far north, which had a flow-on effect in the rest of the country.

However, during this time female mayors who died were replaced by male mayors after an internal election among the councils, “This is because the majority councillors are men, Bissong says.

“Local government deals with sanitation and health and we need to integrate women or the gender component into all of this.”

“Women need to be mayors, not deputies, to make project decisions such as creating nurseries or kindergartens around markets” This allows market women to earn their living while their children have education and care.

“There are many other similar infrastructure needs which are often not given priority such as maternal and reproductive health, and gender friendly and separate toilets for girls and women in schools and at workplaces.”

Cameroon has gender friendly laws, but the media women noticed in the last election that while political parties were encouraged to have women candidates, most of the parties tended to feature women as window-dressing, “they will not put their competent women at the top of the list, they will put them at the tail or put them in a list just endorsed for the election” Bissong says.

#1Woman1Vote is the major outcome of a 3-day symposium in August 2019 organised by AFMEC with the financial support of the U.S Embassy in Cameroon. (AFMEC was formed after a 2018 US State Department sponsored trip for Cameroon female journalists to meet up with professional US media women and their organisations).  AFMEC’s first forum was in Cameroon in the lead-up to the national elections in 2017 and was based around the IAWRT safety handbook and advice for media women reporting in conflict zones, such as those in Cameroon.

At the 2019 forum, there were about 78 women, mostly gender advocates who run programs to raise awareness of the rights and safety of women and girls. They were from different arms of the media – online newspapers, television, blogs, and drawn from the 10 Regions of Cameroon.

They upgraded their skills regarding ensuring balanced coverage of the February 2020 council and legislative elections in Cameroon. They heard about the electoral legal framework from Patience Fule-Buang Elango of the national election authority (ELECAM) and Henriette Onguene from the National Communication Council (the regulator and controller of Cameroon media).

Topics covered included: gaps in the media coverage of electoral processes, such as women’s involvement and female candidates; gender based violence as a hindrance to women’s participation; producing gender sensitive content in election reports, and professional ethics.

The focus on women in politics came from Yvonne Muma of the N.G.O, More Women in Politics, an expert from the Ministry of Women’s Empowerment and the Family, Mrs  Kendeme, and the Mayor of Akom 2, in the south region, Elise Mballa Meka.

Her path to becoming mayor has not been easy, especially when she says she refuses to participate in corrupt methods of gaining and maintaining political office. Elise Mballa Meka challenged those at the forum to stop restricting themselves to being intermediaries, to dare to be candidates for council and Legislative elections and to work to get these positions in political leadership.

Bekky Bissong says the media women want to focus on getting other women into decision making positions and to have good gender legislation enforced, some might consider politics upon retirement she says.

“Our main focus is to increase the number of women in political leadership in local government, council and government ultimately 50-50 by 2030.” 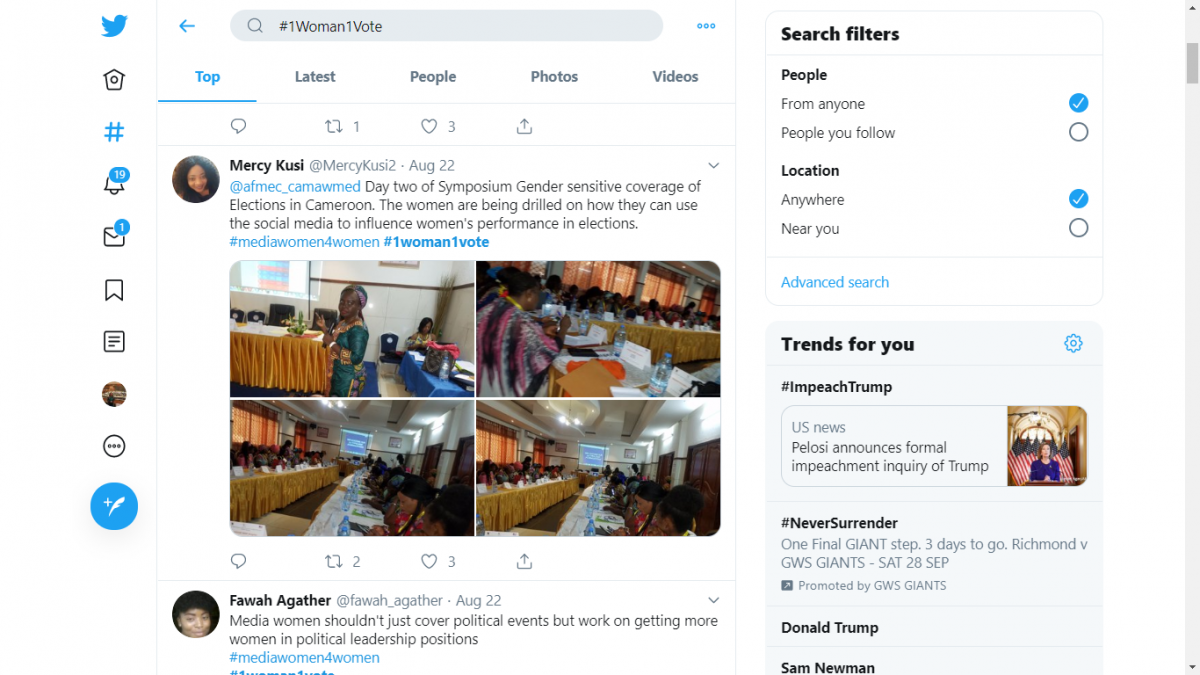