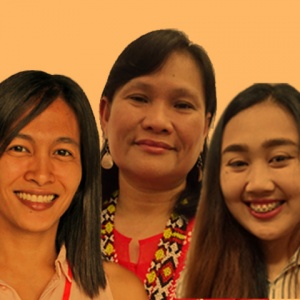 Day 3 of 16 Days of Activism Against Gender-Based Violence

The IAWRT Secretariat in the Philippines pledge to continue to work for the release of IAWRT member and journalist Frenchie Mae Cumpio and to fight back against attacks on journalists.

Cumpio was arrested and jailed since February 2020 through a police raid via a search warrant of Cumpio’s media outfit’s office, Eastern Vista, where firearms and explosives were said to have been found. Similar incidents of raids yielding what the accused and their counsels refer as  “planted evidence” have happened before and continued after Cumpio’s arrest.

Negros community media group Panghimutad was also raided on October 2019, where journalist and IAWRT member Anne Krueger was arrested, detained and then released on bail but continues to face ‘illegal possession of firearms and explosives’ charges.

Another community broadcaster of IAWRT’s disaster radio program Radyo Sugidanon, Elena Tijamo was abducted in June 2020 by suspected state elements while Cebu was on COVID-19 lockdown, and remains missing to this day.

Aside from those arrested or jailed or missing, a few IAWRT members in the Philippines are also facing libel charges for their work and reporting. Most of them, who belong to community or alternative media, were also red-tagged in relation to their media outfit, their work and their reports. In the Philippines, red-tagging has become a dangerous prelude to more or graver human rights violations or attacks.

We pledge to continue to call attention to these attacks against IAWRT members in particular and against journalists and press freedom in general. We will continue to condemn, call out, fight back– be it in the media, in courts or in the streets – against these attacks that attempt to silence journalists and also the attempt to hide from the public underreported stories about the plight of the marginalized.

as supervised locally by IAWRT International Board Treasurer Jola Diones-Mamangun