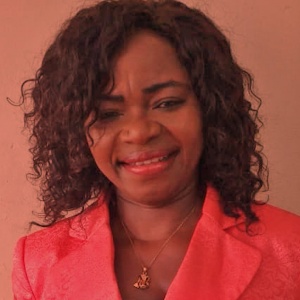 Day 6 of 16 Days of Activism Against Gender-Based Violence

As a gender and women’s rights advocate working in the broadcast media in Cameroon, I have been raising the awareness of women, girls and parents on the need to review mentalities, the values we impart to children as we groom them from childhood because gender-based discrimination are mostly rooted in our culture and belief systems.

My advocacy involves men who so cherish their mothers, daughters and sisters and will go

all lengths to protect and empower them. Unfortunately when it comes to their wives, several socio-cultural norms as well as customary and traditional practices demean women and girls to objects, thus trampling on their rights.

During the annual campaign #16daysofactivism2020 and thereafter, I recommit to intensify the awareness and advocacy by ensuring that legal instruments are implemented and that victims as well as survivors of all forms of gender-based violence (GBV) make use of these laws to seek justice, protect themselves and others and above all, work to #EndGBV in #Cameroon.