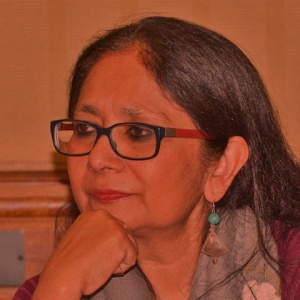 Day 4 of 16 Days of Activism Against Gender-Based Violence

Nupur Basu from India – senior journalist and Executive Producer of Velvet Revolution – pledges to continue advocacy globally for the right of women journalists to do their truth telling.

The last decade has seen dozens of women journalists in the world being killed, raped, jailed and intimidated because the state or non-state actors don’t like these women speaking truth to power. Whether it is in India, Philippines, Ireland, USA, UK, Malta, Zimbabwe , Iran, Turkey, Saudi Arabia – the list is endless . Name the country, and the proverbial red line that existed before in ensuring the safety of women journalists, has been breached.

I pledge to keep doing advocacy demanding an end to impunity of those who kill, imprison and compromise the safety of women journalists. I shall do this through my writings and with our IAWRT produced long documentary – Velvet Revolution – of which we have held over 250 screenings all over the world followed by Q and A with audiences since it was released in March, 2017. Civil society must defend the rights of women journalists and end the violence against them if they want their democracies to function. I pledge to passionately emphasise this at every forum available to me in the future as I have done in the past .