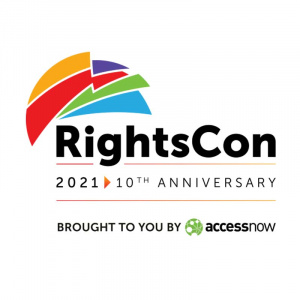 RightsCon 2021 was held online for the second consecutive year from Monday, June 7 to Friday, June 11. Rights Con and Access Now hosted its largest program yet, with over 500 sessions happening across 16 tracks and 10 intersecting themes. RightsCon is tagged as the world’s leading summit on human rights in the digital age.

In 2011, Access Now hosted the first-ever RightsCon (then the Silicon Valley Human Rights Conference). The objective of the conference is for a civil society-led space where all stakeholders – from tech companies to government representatives to human rights defenders – come together to build a rights-respecting digital future. Since then, RightsCon has been held in Rio de Janeiro, Manila, Brussels, Toronto, Tunis, three times in Silicon Valley, and twice online.

Access Now is an international organization that defends and extends the digital rights of users at risk around the world.

Access Now Executive Director Brett Solomon highlighted the accomplishments of this year’s RightsCon in his closing message. Here are a few:

The RightsCon After Dark program featured performances from artists. Several women artists were featured. Watch Sabika, an activist, organiser, poet, and the Founder of Sar-e-rahguzar: Poetry on the Streets. Her work revolves around gender and minority rights. She has been part of several anti-fascism and human rights movements and groups. She is the co-editor of The Bystander Anthology and the Senior Editor of The South Asian Avant Garde Anthology. She is also an INK Fellow.

Another performance is from the LAM Sisterhood, an award-winning story company, fills the world with stories for African women and runs the Brazen Podcast.

Solomon also talked about Protecting digital civic space: the role of technology in supporting democracy in a panel discussion at RightsCon. He outlined 15 things governments can do to make sure technology is used to defend, and not destroy, democracy and human rights.