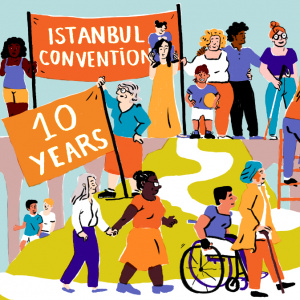 The Istanbul Convention is the first international legally binding instrument to combat violence against women and domestic violence.

May 11, 2021 was the 10th anniversary of the Council of Europe (COE) Convention on Preventing and Combating Violence Against Women and Domestic Violence. It was opened for signature 10 years ago in Istanbul, Turkey, thus the name Istanbul Convention.

The Istanbul Convention aims at ensuring essential legal protection to women and girls across the world. It builds on the notion that violence against women is a violation of human rights. It characterizes violence against women as a violation of human rights and a form of discrimination. The Convention urged countries to exercise due diligence when preventing violence, protecting victims and prosecuting perpetrators.

The treaty also established a series of offenses characterized as violence against women, and urges states which ratify the Convention to criminalize several offenses, such as psychological violence, stalking, physical violence, sexual violence, rape, all engagement in non-consensual acts of a sexual nature, forced marriage, female genital mutilation, forced abortion and forced sterilization. Convention also states that sexual harassment must be subject to criminal or other legal sanction, and also targeted crimes committed in the name of “honour.”

Thirty-three COE countries have now ratified the Istanbul Convention, which came into force in 2014. Twelve more have signed but not yet ratified, the oldest among them are Ukraine (2011) and United Kingdom (2012) and latest to sign among them are Moldova (2017) and Armenia (2018). Two countries, Russia and Azerbaijan, have taken no action.

After 10 years, some governments have withdrawn, such as Turkey, or threatened to withdraw from the convention, such as Poland. Others have refused to ratify it despite soaring reports of domestic violence during Covid-19 pandemic lockdowns.

Even before the COVID-19 pandemic began, 1 in 3 women experienced physical or sexual violence mostly by an intimate partner globally. The pandemic increased risk factors for violence against women, with the UN Women calling it the Shadow Pandemic.

In 2018, the COE addressed concerns or statements that the Convention is trying to impose a certain lifestyle or interfere with personal organization of private life, and said that it only seeks to prevent violence against women and domestic violence.

Criticisms to the Convention also include the definition of gender as a social construct. The Turkish presidency blamed the LGBT community for its withdrawal, “the Istanbul Convention, originally intended to promote women’s rights, was hijacked by a group of people attempting to normalize homosexuality – which is incompatible with Turkey’s social and family values. Hence, the decision to withdraw.”

In the Convention’s purpose, gender is defined as “the socially constructed roles, behaviours, activities and attributes that a given society considers appropriate for women and men.”

In the Convention’s 10th anniversary, the European Union (EU) High Representative Josep Borrell said the EU stays committed to working together with the COE to promote the standards and objectives set out in the Istanbul Convention. He also affirmed that the EU will continue to be at the forefront of efforts towards real gender equality.

Turkey became the first country to sign this convention and ratify it in its parliament. However, it was announced on March 20 this year that Turkey President Recep Tayyip Erdogan decided that Turkey would withdraw from the Istanbul Convention.

The COE entered Turkey’s denunciation of the Convention on March 22, and will enter into force on July 1. Turkey is the only one so far who have withdrawn from the convention, also after signing in 2011 and ratifying it in 2012.

Locally and internationally, the decision to withdraw was viewed as a setback for women’s rights.

International reaction to Turkey’s withdrawal was generally a call for the Turkish government to reconsider. COE  and European Union (EU) leaders, UN Special Rapporteurs and Working Groups, UN Women, and U.S. President Joseph Biden were among those that were alarmed by the decision or found it disappointing, while some called for the reversal of the decision.

CEDAW Committee Chair Acosta Vargas noted, “As a party to the Convention on the Elimination of All Forms of Discrimination against Women, a sister instrument to the Istanbul Convention, I would welcome a dialogue with Turkey to discuss the importance of the Istanbul Convention for working together on the elimination of all forms of gender-based violence against women at the national, regional and international levels.”

Both called on Turkey to reconsider its decision to withdraw from the convention.

“We join those urging the Government of the Republic of Turkey to continue protecting and promoting the safety and rights of all women and girls, including by remaining committed to the full implementation of the Istanbul Convention, which builds on the standards enshrined in the Convention on the Elimination of Discrimination against Women as well as its general recommendations and case law,” said the UN Women in a statement on Turkey’s withdrawal.

Many women groups from the country found the decision “taken by one man” unlawful since it was a decision of the parliament that had ratified the Convention in 2011.

To many women’s group in the country, such decision does not inspire confidence amid the forbidding situation of women in the country. Local reports in Turkey noted at least three women are killed and dozens of women are injured every day.

Thousands of women have taken to the streets chanting “Istanbul Convention saves lives” and “We don’t accept one man’s decision.”