How to End Misogyny in the News Industry:

“We are done pandering to the egos of change-resistant influential men in the hope that our gentle lead will eventually encourage them to join us on a meander toward gender equality in the news business.”

By AN OPEN LETTER June 19, 2018 Shared from niemanlab.org

This open letter, about the broad problem of sexism and sexual harassment in the news industry and at global journalism events, was published simultaneously at The Quint, European Journalism Observatory, ICFJ, Chicas Poderosas, WikiTribune, and NewsMavens. The letter was triggered by incidents during the World News Congress in Portugal hosted by the World Association of Newspapers and News Publishers (WAN-IFRA) in June.

The IAWRT President Violet Gonda, and Vice Presiudent, Abeer Saady, have joined signatories to 14 principles to end misogyny in the news industry.

An epic “manel,” sexist jokes about breasts, and on-stage sexual harassment at the recent World News Congress in Portugal put the gap between acknowledging gender inequality and actually empowering women into stark relief. In response, a group of senior international news professionals has penned this open-letter. It’s time to stop talking about the need for equality and start actively reforming the industry.

The World Association of News Publishers’ (WAN-IFRA) annual Congress in early June is one of the media world’s major industry events — a networking opportunity for close to a thousand attendees from international news publishing, with keynote speakers and panel discussions addressing the future of journalism and the news business in a time of convergent crises. It should be the pinnacle of good practice, shaping the path for industry progression.

But the 2018 World News Congress was a study in contrasts, one indicative of the news industry’s treatment of women: symbolic (and at times substantial) gestures of respect interspersed with real, sometimes shocking sexual discrimination and harassment.

Women in news: moving from the sidebar to the front page

The event began with the second annual Women in News Summit featuring the BBC, The New York Times, former editor-in-chief of USA Today and author of That’s What She Said Joanne Lipman, former CEO of Gizmodo Media Group Raju Narisetti, and many others committed to championing diversity within their news organizations. Their impressive stories and good practices alone made the trip to Portugal worthwhile.

However, the Summit was relegated to pre-conference programming — like an asterisk to the main event. And while the Congress curation achieved unprecedented levels of gender balance (46 percent of speakers were women), the opening ceremony saw a veritable wall of men — we lost count at nine — speak for 90 minutes before the prestigious Golden Pen of Freedom was eventually awarded to Maria Ressa. The award bestowed on Ressa, CEO and editor-in-chief of Rappler.com, recognized her sustained battle against the gendered, state-sponsored harassment of journalists in the Philippines. It was an important and deeply symbolic decision to select Ressa. But by the time she was allowed to speak, several delegates had left the venue in disgust with the total absence of diversity on stage.

Over the next three days, the event careened between spotlighting gender equality with awards and speeches, and disrespecting women in practice.

Talking about diversity is not enough to effect change. But, ironically, scandal sometimes is. The rampant displays of sexism and sexual harassment during the gala conference dinner at the Estoril Casino (the venue that inspired Ian Fleming’s Casino Royale) left so many participants and WAN-IFRA employees shaken that they ultimately triggered significant action.

The evening began with a joke from the MC comparing fake news with breasts. The punchline: in both cases he prefers the fakes.

Then came the editorial leadership awards given to outstanding female editors from Uganda and Jordan. One (important) goal for women in news. 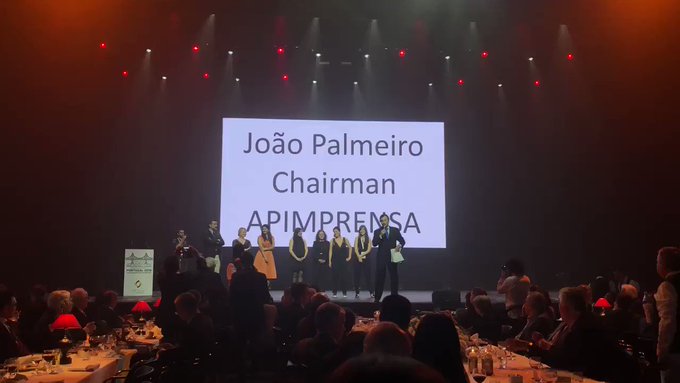 And finally, a closer so awful that many of us present (including WAN-IFRA employees we’ve spoken with) were in shock. At the end of the dinner, João Palmeiro, the head of the Portuguese press association, persuaded a group of women who organized the conference to join him on stage, before asking one of them to tie tablecloths around the necks of the others, saying he was giving them wings: “They are my angels and I don’t know if I am prepared to share them with you.” Palmeiro (a former WAN-IFRA Board member) continued, calling himself ‘Charlie’ and declaring: “In the name of all of you, I am going to kiss Christin!” WAN-IFRA’s senior project manager Christin Herger was one of a number of employees on stage. You can watch the cringe-inducing video here.

The audience applauded. And gasped. Herger visibly bristled and withdrew from Palmeiro’s forced kiss, but he was undeterred. “She’s shy, please, please, and I hope you, Portuguese girl, are not so shy,” he said before grabbing the Portuguese WAN-IFRA employee Maria Belem and kissing her instead, despite her obvious discomfort. As he exited the stage, Palmeiro thanked the line-up of women and called them his “dream team,” making much of the fact they were all women. Ironically, a new WAN-IFRA handbook on combating sexual harassment in the media was launched during the conference.

Maria Belem, one of the women on whom Palmeiro had imposed himself, posted this message on the official conference app after the event: “We are not angels, and we do not work for Charlie. We are professionals working for press freedom and towards a healthy media ecosystem.”

Here’s the good news: despite the (at times) overt sexism and sexual harassment on display during the World News Congress, the events appeared to trigger a chain reaction that has deepened WAN-IFRA’scommitment to reforms and delivered a chance for much-needed reflection within the industry as a whole.

When social media users called out the misogyny in Estoril, it became a #metoo moment for journalism events. In response to expressions of outrage — both on and offline — WAN-IFRA publicly apologized, openly reflected on the incidents, issued a statement of condemnation via the World Editors Forum, and announced the promotion of women on its board.

Michael Golden, the chair of WAN-IFRA’s board and former vice chairman of The New York Times, appeared on stage the morning after the gala dinner to address the crisis:

“Last night what happened on the stage…with João Palmeiro calling up the staff was inappropriate. He imposed himself on our staff — on Christin Herger, on Maria Belem — in a way that made them uncomfortable and that made many people uncomfortable. I am here to say that that was not appropriate. I am here to apologize to our staff for what happened last night and to say that we recognize the extraordinary work they have done and that they did not deserve to be put in that situation.”

Palmeiro stepped up to the stage next, saying sorry “from the bottom of my heart.” But that apology seems hollow when viewed in the context of an interview he gave later that day to journalist Yusuf Omar. Echoing sentiments that had been hinted at by WAN-IFRA executives, Palmeiro blamed his behavior on Portuguese culture, claiming that such conduct was “absolutely OK” and “normal” in Portugal.

That was not a view shared by Portuguese women, including those on the stage. “I felt humiliated as a professional, as a woman, and as a Portuguese person. It was not cultural,” one told us.

In the aftermath, WAN-IFRA drew attention to the new appointment of South African editor Lisa MacLeod as the vice president of its board (which represents many of the world’s biggest news brands) – the first woman in the organization’s 70-year history to hold the position. The day before the gala dinner, two new women were voted onto the board and four promoted to the board’s executive committee. Though this is progress, WAN-IFRA remains heavily male-dominated, with women still comprising just 14 percent of board members. (The World Editors Forum board has achieved 35 percent female representation.) Indeed, WAN-IFRA CEO Vincent Peyregne acknowledged this by saying, “We have a lot more to achieve in the coming months.”

The Palmeiro incident didn’t happen in isolation. It followed a sexist trajectory deeply rooted in stigmas that marginalize women across all news organizations (and throughout society). Though many can point proudly to diversity goals displayed on corporate websites, and the injection of influential female voices into content and conference programs, women in the media continue to be under-represented in bylines, behind editors’ desks, and in board rooms. They’re also often paid less than their male counterparts.

Our industry has a responsibility to lead on gender equality in, and through, the media. Boader social change depends upon it.

And we, members of the international journalism community, are not prepared to sit through another “manel,” support organizations that disingenuously claim credit for gender equality initiatives, or stay silent when female colleagues are sexually harassed before our eyes.

We are done pandering to the egos of change-resistant influential men in the hope that our gentle lead will eventually encourage them to join us on a meander toward gender equality in the news business. Time is well and truly up.

If you’d like to add your name to the list of signatories below — regardless of your gender — please do so here.

PHOTO BY MIHAI SURDU ON UNSPLASH